5,364 metres above sea level, Sinead O'Regan jumps for joy at reaching Mount Everest Base Camp in Nepal back in 2019.

SINEAD O’Regan is aiming to hit new heights inside and outside the GAA world this year.

The Rosscarbery woman is one of the busiest chartered physiotherapists in the county. It’s still early days in 2022 so O’Regan isn’t sure how many GAA clubs she will end up working with until the season progresses.

On top of that, O’Regan also got involved with the Cork senior ladies’ football team in 2021 and, under the new management team led by Shane Ronayne, she will continue that role this year. It’s a job she loves.

‘A friend and colleague, Orla Coughlan, who is also a Chartered Physio, was involved with the Cork LGFA seniors for the last number of years,’ O’Regan told The Southern Star.

‘Orla and I would know each other from the West Cork sporting world. Orla got in contact with me in early 2021 and asked if I would like to come on board and work with her and the Cork (LGFA) seniors.

‘Ephie Fitzgerald and his backroom team have since been replaced by new manager Shane Ronayne. I didn’t know what was going to happen for the coming year as I didn’t know Shane, personally, prior to starting with Cork in 2022. Then, I got a phone call from him asking if I’d like to be involved. I jumped at the opportunity as I loved working with the Cork seniors the year before.’ Signing up with Ronayne's Cork panel is agreeing to work in a demanding, high-performance environment. Cork LGFA’s professional attitude to training, individual preparation, nutrition and performance analysis means O’Regan will have to be at the top of her game, something she appreciates and is happy to sign up for once again.

Unsurprisingly, a Cork team that came up short to Meath in last year’s All-Ireland semi-finals has been chomping at the bit to get back out on the pitch and atone for 2021’s championship exit.

As Cork's team physiotherapist, there are a number of things O’Regan has to watch out for even at this early juncture of the season.

‘A big thing you tend to see at this time of the year is player overload,’ she stated.

‘Players may not be allowing for adequate recovery time after completing their early training sessions. A lot of players will have had a period of time off after their clubs finished up or the inter-county season ended. So, players are trying to make up for lost time and going from 0 to 100 and possibly overdoing things.

‘That’s why we have been carrying out online educational sessions with the Cork players over the last couple of weeks as Covid prevented us from hosting collective sessions. 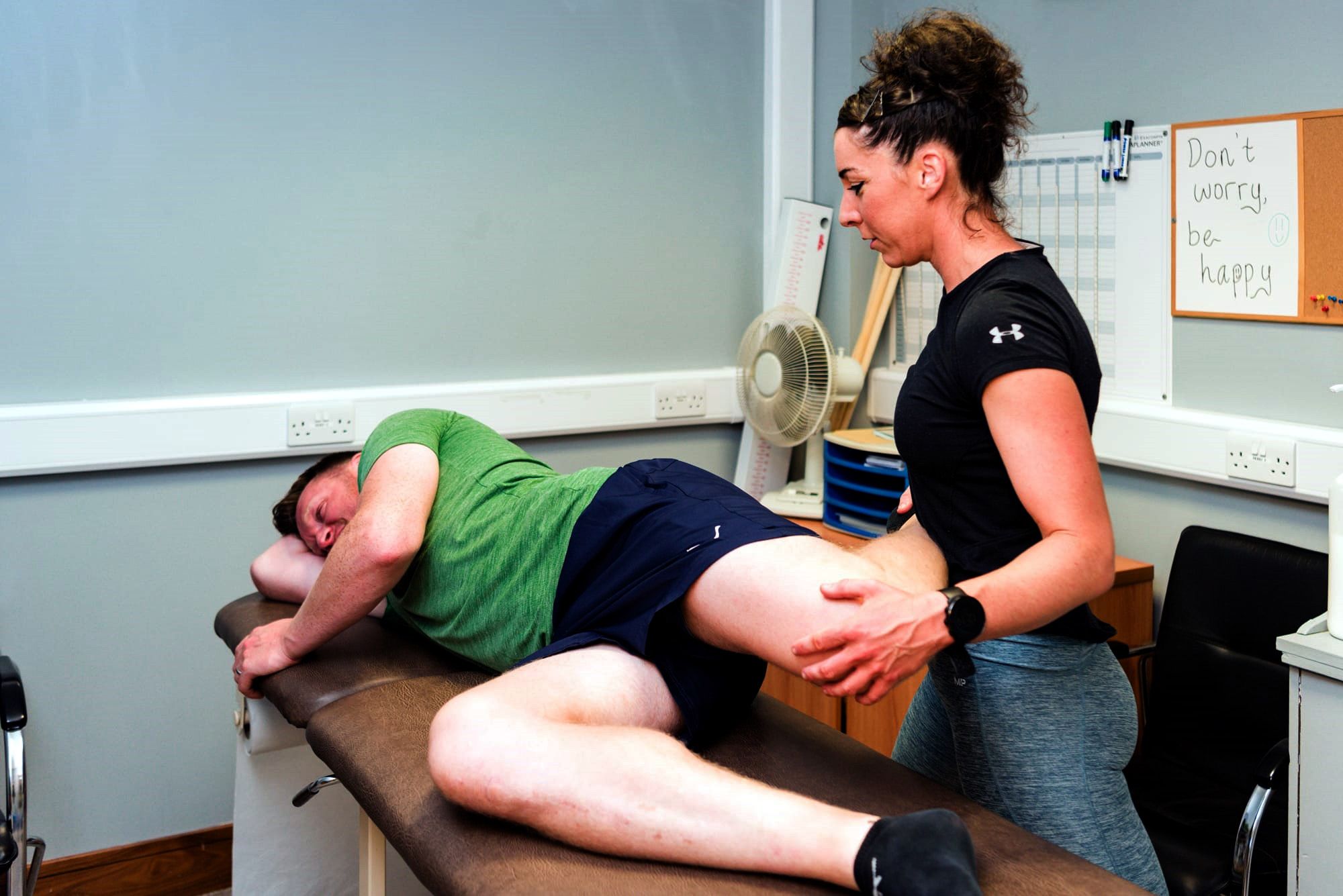 Sinead O'Regan busy at work with Iain O'Driscoll at her Optimum Recovery and Physiotherapy offices in Clonakilty GAA's Ahamilla complex.

‘I conducted an online session with the girls on overtraining and under-recovery. Louise O’Connell, our team doctor, did a session on returning to play post-Covid which is hugely important right now. Johnny Holland, Cork’s nutritionist, did a session on the importance of adequate nutrition and fuelling properly for recovery as well as performance.

‘Being involved in a high-performance set-up like the Cork senior ladies is great because of the multidisciplinary team approach. You have the coaches, strength and conditioning coach, physios, doctors, nutritionists all working together to benefit and improve the Cork players.

‘We are dealing with elite athletes who are motivated and driven individuals. The Cork players take everything on board and follow instructions to a tee but if any athlete isn’t fueling appropriately, then that is going to delay their recovery.

‘So it is a case of keeping a line of communication open between myself or the strength and conditioning coach with the players and making sure they inform us if they are carrying a knock. From there, we can restructure or modify their training programme accordingly.’ O’Regan knows a good portion of what lies in store for 2022. But unlike other chartered physiotherapists in her chosen profession, she has added a hike up the Himalayan mountains alongside dealing with a growing list of clients.

The Cork senior ladies footballers, Clonakilty senior footballers and Carbery senior hurlers have already signed O’Regan up for the season ahead and other clubs are likely to follow suit. Add to that a trek in the Himalayan mountains.

Why would a physio, working flat out for most of the year, add the arduous task of hiking up the steep-sided jagged peaks and alpine glaciers of one of the world’s most dangerous mountain terrains?

‘The physio community is a very small one, we all know each other, are on a WhatsApp group together and always covering matches for each other, here, there and everywhere,’ O’Regan stated.

‘I started out 2021 with just two clubs but ended up working for a much bigger number of clubs by the end of the year.

‘Yes, I have a few other things on the horizon including a hike up the Himalayas in September as well as hopefully running the Chicago marathon in October. So, I need to allow adequate time for my own training!

‘I love hiking and did my first big hike in Mount Kilimanjaro, in Tanzania, back in 2018. Honestly, it was one of the best experiences of my life. Then, I hiked to Mount Everest Base Camp in Nepal in 2019.

‘The Himalayan hike I’m embarking on will be the highest I’ve ever attempted at over 6,000 metres above sea level. That Himalayan hike has been postponed for the past two years due to Covid so I’m hoping it finally goes ahead this year. I can’t wait.' 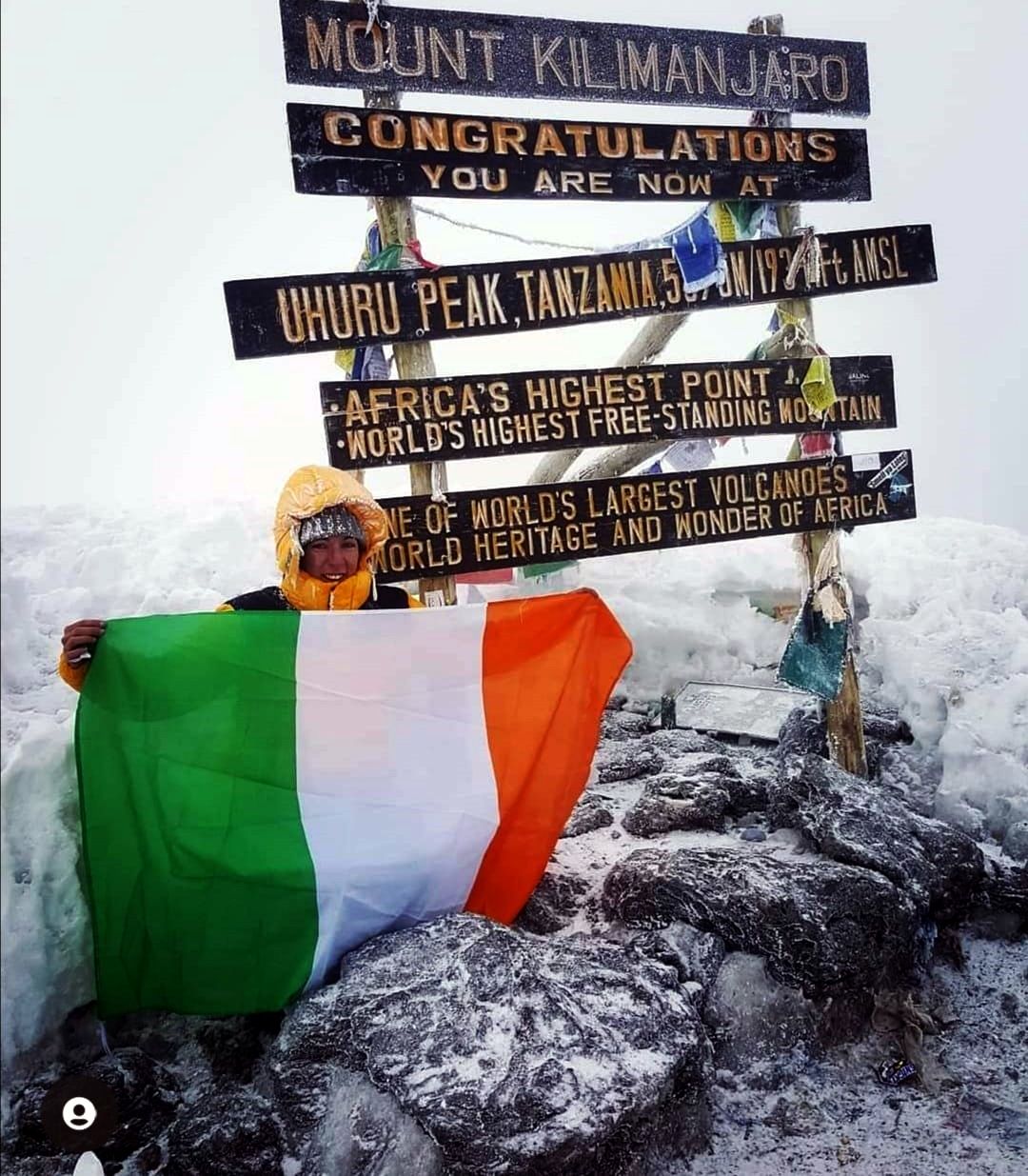 Sinead O'Regan at the summit of Mount Kilimanjaro in Tanzania in 2018.

Not content with forging a career and growing reputation in the physiotherapy world, O’Regan hopes to scale new heights in both her professional career and hiking expeditions during 2022.

There’s little doubt that the Cork LGFA physio, along with her management team and players, hope to finish the year on top of the world.

To get in contact with Sinead O'Regan (Optimum Recovery and Physiotherapy) phone 083-0102475.