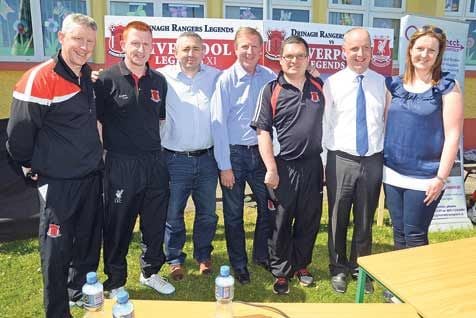 DRINAGH National School had rarely experienced a day quite like it.

Individual letters spelling out ‘You’ll Never Walk Alone’ were printed on single A4 sheets and taped across the windows of the picturesque West Cork school and the famous football anthem was belted out by the school’s enthusiastic band members in blazing sunshine.

A Liverpool FC flag was draped across a table in front of multiple rows of chairs with pockets of schoolchildren in Drinagh Rangers AFC and Liverpool jerseys awaiting the arrival of a former Republic of Ireland football international.

The former Irish international was in fine form, making time to take in a quick road bowling demonstration and enjoying every minute of the warm welcome.

‘Last year’s visit to Dunmanway as a guest of the Republic of Ireland Masters to take on your West Cork Masters League lads was a very special experience,’ said Whelan.

‘I’m absolutely delighted to come back to West Cork once again with the Liverpool Legends this summer. Ray (Houghton), Aldo (John Aldridge), Phil Babb and now Jason McAteer as well are all coming over and it should be a really good game if last year’s Masters match is anything to go by.

‘We are not used to losing these types of matches let alone drawing 2-2 like we did last time we were over. The Liverpool Legends may be a little slower nowadays, but we are still very much looking forward to everyone turning up in July for what will be a great family event.’

Whelan took time out of his busy schedule of signing every autograph request and posing for hundreds of photos with delighted fans of varying ages to speak to The Southern Star about his upcoming return to West Cork. As a former Republic of Ireland international, Whelan has watched with interest as the Jack Grealish tug-of-war between his native country and England has escalated in recent weeks.

‘I think there has been far too much said and written about the whole Grealish situation at this stage,’ commented Whelan.‘I would say that it would be worth his while remembering that there have plenty young players in the past who waited on an England call-up only for the call never to materialise.

‘There’s no guarantees that Grealish will get into the current England set-up anyway because they have so many quality players at their disposal. I guess the bottom line is that if he has said he plans on returning to the Irish U21s in September then just leave him alone to get on with that.

‘People forget that he is still just a 19-year old kid so I would let him come back and play with the U21’s again and then see how he feels. It is a huge career decision to be asked to make for someone of such a young age so get off the kid’s back and let him make up his own mind.

‘Don’t get me wrong, we’d love to have him in the Irish senior squad, eventually. I watched him closely in the FA Cup semi-final win over Liverpool at Wembley and he was really good that day. He’s a kid with a huge amount of potential, so just let him be.’

Whelan was fortunate to play alongside some legendary players during a stellar career, none more so than the likes of Alan Hansen, Kenny Dalglish and Graeme Souness. Steven Gerrard is up there amongst the pantheon of great Liverpool players and the 53-year-old admits his departure will leave a gaping hole in the Anfield club.

‘Souness had a tremendous influence on the Liverpool dressing room and it is the same with Steven. Graeme was our leader, our main man on the pitch and we struggled badly the season after he left.

‘Now Gerrard has gone in similar circumstances and it is going to be extremely tough for Brendan Rodgers to replace him. After Graeme Souness left, Kenny Dalglish did manage to pick up some quality replacements, but it took a full season before we started winning again.

‘I think Gerrard was very unfortunate in that he didn’t have great players around him like I did, such as Kenny (Dalglish), Ian (Rush) and Graeme (Souness), because we would have seen even more success from him. It is the end of an era really with Steven and Jamie Carragher leaving that dressing room.’