CORK manager Shane Ronayne knows nothing less than a victory over Waterford will do if the Rebels are to avoid a national league relegation play-off.

At the outset of this year’s Division 1B campaign, few, if any, would have expected this weekend’s Cork and Waterford encounter to be a relegation battle.

But that’s the scenario facing Ronayne and his panel following defeats to Meath and Dublin.

A 2-7 to 1-8 loss away to the All-Ireland champions was followed by a disappointing display in the rain at Croke Park. Dublin completely dominated Cork in a 2-15 to 2-3 win a fortnight ago. It means the loser of Cork’s clash with Waterford will finish bottom of the table and then go into a relegation play-off against the bottom team from Division 1A.

Cork manager Roynane is looking forward to atoning for that Dublin performance against the Déise at the MTU grounds on Sunday afternoon (2pm throw-in).

‘Having a two-week break since playing Dublin in Croke Park has been really beneficial to us,’ he says.

‘That gave us a good amount of time to work with the players. When you are playing week after week, sometimes you can’t correct things that might have been going wrong. We have had a good number of sessions since losing to Dublin, reviewed it and seen where we need to improve – and that's a lot of places.’

And what of Cork’s final Division 1B league opponents? Pat O’Sullivan’s side put in a battling effort amid awful conditions before losing out to Meath by eight points. Prior to that, Dublin fired home four goals during their opening league victory at Fraher Field.

Cork have too much quality and should be too strong for their Munster rivals but would be wise not underestimate a county building steadily both on and off the pitch. Waterford head to MTU with nothing to lose and having pushed Ephie Fitzgerald’s senior side all the way in Dungarvan, 2-11 to 2-8, in Dungarvan last June.

‘We are looking forward to the Waterford game,’ Ronayne says.

‘It is going to be a tough game because both teams are fighting for survival. We are glad of the opportunity to rectify some of the things that went wrong against Dublin.

‘Yes, morale was a bit down in the dressing room immediately afterwards (Dublin) but halfway down the road home everyone was in good spirits again and looking forward to taking on Waterford.

‘They are a determined bunch and were as disappointed as we (management) were with our performance against Dublin. Every player relishes the opportunity to improve. Our players know that as well and the attitude has been brilliant in our training sessions since playing in Croke Park. 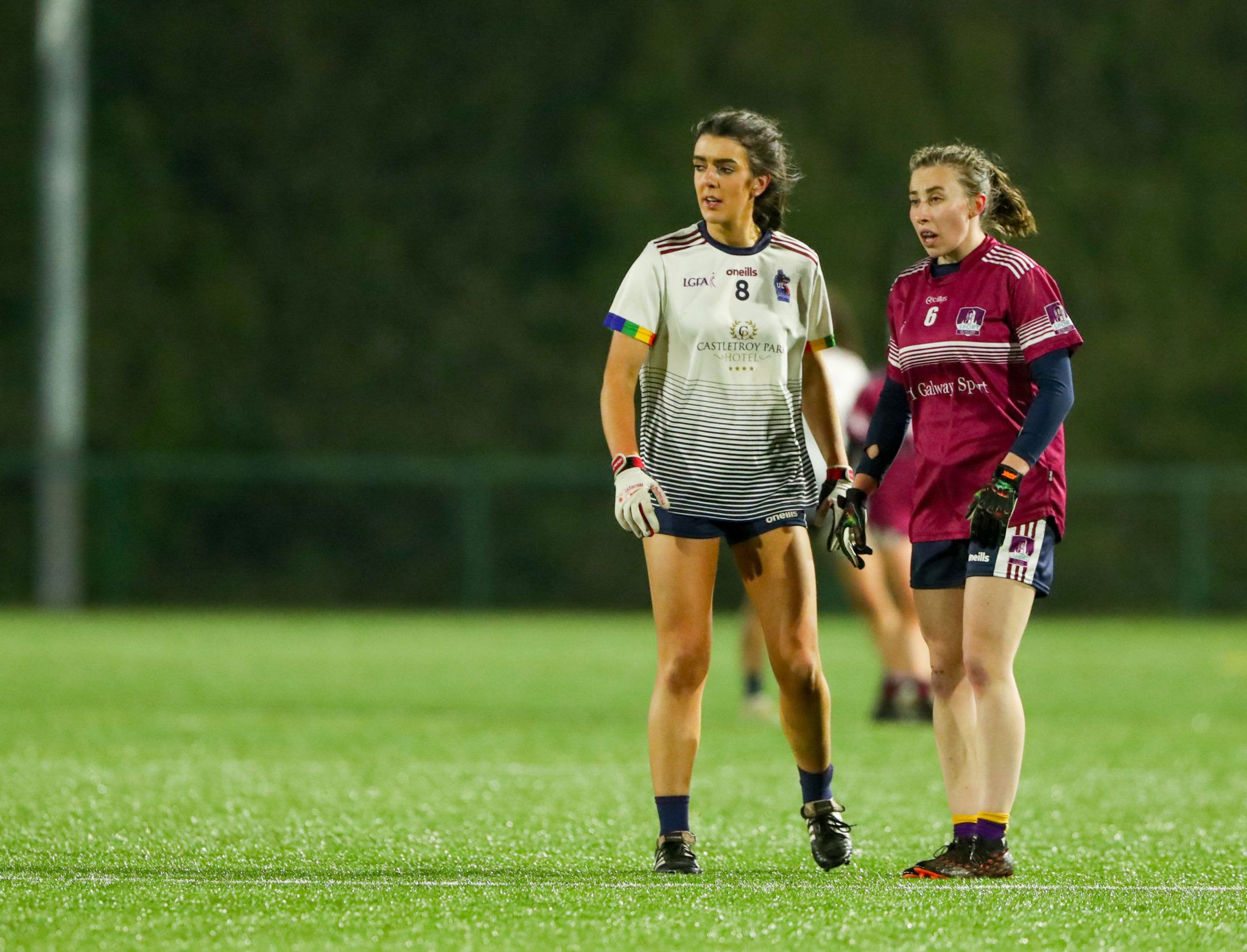 They play together in the Cork half-back line but Dohenys' Melissa Duggan and Macroom's Erika O'Shea, both All-Star winning defenders, were on opposite sides when NUI Galway and UL clashed in the third round of the O'Connor Cup. Bragging rights went to Duggan and NUIG after their 3-5 to 1-10 win, but the deadly duo will be back together this weekend when Cork take on Waterford in a crunch national league game. (Photo: Tom Russell)

‘Pat O’Sullivan is a very astute manager and sets up his teams very well. I attended Waterford’s game with Dublin and a 12-point defeat was very flattering to Dublin that day. Waterford certainly did a lot better in certain things than we did (against Dublin). Waterford’s press on the Dublin kick-out was very impressive, something we didn’t do very well in Croke Park.

‘As for Waterford’s game with Meath, it was very hard to judge that performance because of the weather. That game was a lot closer than the score suggests. Conditions were so bad in Dungarvan. You couldn’t be reading into anything out of it.

‘I think Waterford are going to pose a huge challenge to us on Sunday. Hopefully, the weather will be good and I believe that this is going to be a very exciting game. Both teams must win. There is no point in Cork or Waterford sitting back and hoping that they won’t lose. That won’t work.

‘I am looking forward to what is going to be a tough battle, no doubt about it. I feel that if we can get the improvements that we need out of our players then Cork can get the job done.’