Cork forward Ciara O'Sullivan has been in stand-out form during the league.

CORK won’t stand back and allow themselves to be pushed around by Dublin in Saturday night’s Lidl NFL Division 1 final at Croke Park (7.30pm), insists Rebel stalwart Ciara O’Sullivan.

The experienced Mourneabbey footballer (30) admits that this dominant Dublin team has dictated recent games between the two counties, but Cork feel they are now equipped to match the Dubs’ physicality and aggression.

O’Sullivan points to the recent league meeting between the two great rivals at Páirc Uí Chaoimh as an example of how Cork didn’t allow themselves be bullied on the pitch.

‘A lot of the time what can happen against a team that have been All-Ireland champions for the past few years – and are obviously very good – is that you wait for them to take the game to you instead of taking the game to them. That’s a big learning point for us,’ O’Sullivan told the Star Sport Podcast.

‘I don’t think we are any weaker or less fit than Dublin physically, but at times we stand off and, for want of a better word, let them bully us.

‘But we didn’t stand off them in the league game a few weeks ago, we really went at them, we won a lot of those 50-50 balls and we weren’t standing back.

‘No doubt they’ll up the intensity for the league final and we’ll have to match that, but we need to be aware that we are training as hard in the gym and doing all our S&C like they are so when it comes to the match a lot of it is about mental strength and being prepared to put your body on the line, and knowing of the fact that you can take the hit.

‘We did that in the league and we’ll have to up it again.’

Eight-time All-Ireland winner O’Sullivan also feels that Cork are closing the gap to Dublin. Again, she points to the recent league game at Páirc Uí Chaoimh. During the second half Dublin had streaked 3-11 to 2-8 ahead, but Cork battled back and closed to within a single point by the end.

‘We did well with our fight back,’ O’Sullivan said.

‘Previously, if Dublin got a run on us they could have run out comfortable winners but we pulled it back and we kept fighting until the end. We even had a chance for a draw that came back off the post.

‘We did manage to create goal chances and we did score four goals but we missed a few, too. Their goalkeeper had a great game but if we were a bit more clinical in front of goal it could have been a different result.’

Cork have been racking up the goals in the league and have netted 14 in four matches – against Tipperary (3), Dublin (4), Waterford (2) and Donegal (5). Ciara O’Sullivan is topping the goal-scoring charts with three, along with Kinsale’s Sadhbh O’Leary. Bríd O’Sullivan (2), Libby Coppinger (1), Katie Quirke (1), Emma Cleary (1), Hannah Looney (1), Orla Finn (1) and Máire O'Callaghan (1) have all found the net, too.

With nine different goal scorers so far – and with Áine Terry O’Sullivan and Doireann O’Sullivan still to come into the team – the Rebels are carrying an attacking threat from all over the pitch, and there’s an emphasis this season on making the most of goal-scoring opportunities.

‘It is something that we are more aware of,’ O’Sullivan explained.

‘Looking back on matches last year we had goal chances that we didn’t even identify as goal chances. It’s not a case that they were saved or hit wide for a goal, we either went to tap the ball over or hit it wide from a point attempt. We have done a bit of work in identifying if there is an overlap, that’s a goal chance and in that case a point is a bad thing, that’s worst-case scenario. You want the goal.

‘We are seeing the rewards of that in the league but we still have work to do. I hand-passed the ball over the bar against Donegal but if there was someone across the middle, that was a goal chance. We have stuff to work on but we are seeing the benefits of the focus that the management have brought in to identify goal chances rather than take a handy point.’ 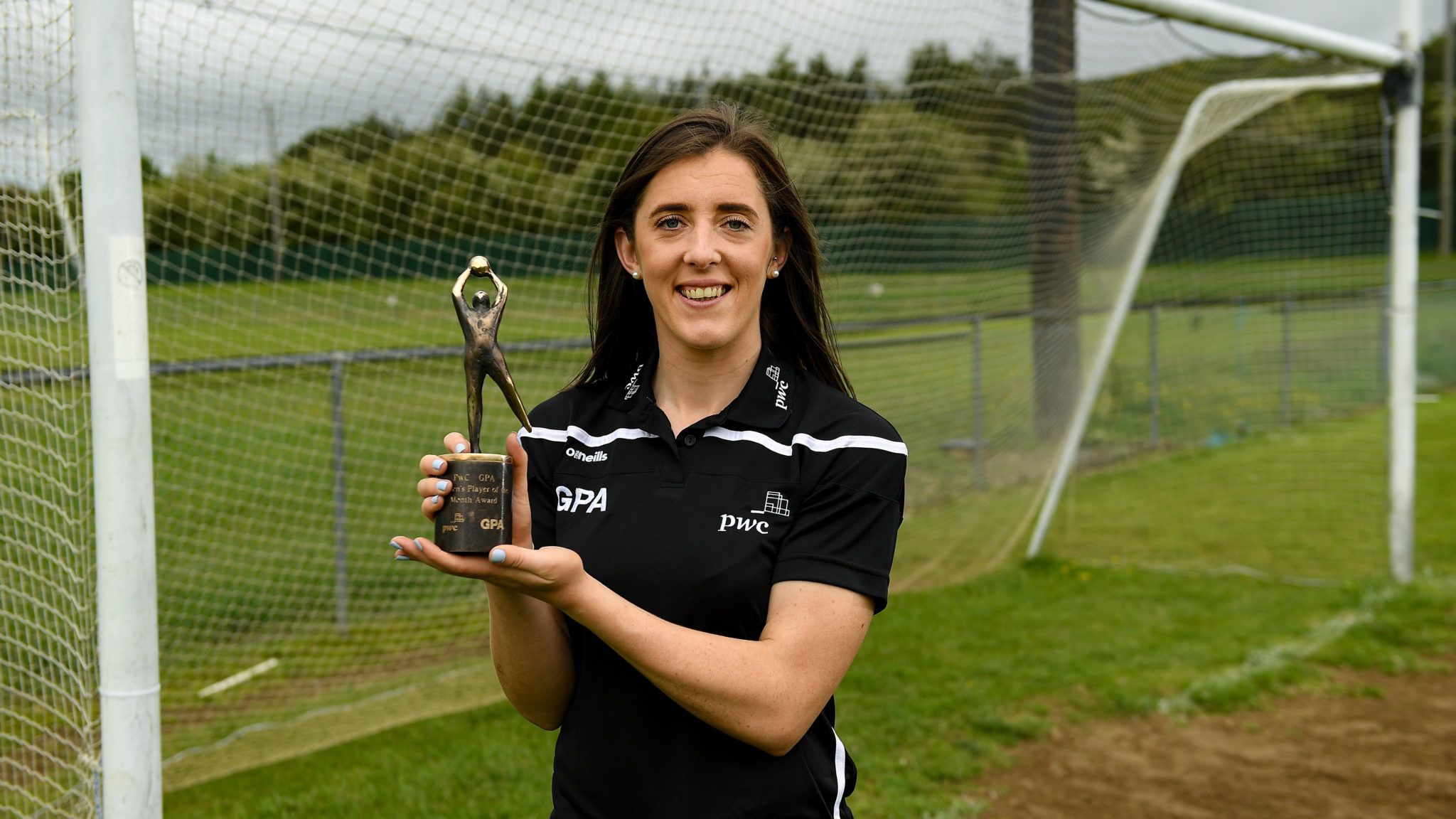 Ciara O'Sullivan with her PwC LGFA/WGPA Player of the Month for May 2021.
(Photo: Matt Browne/Sportsfile)

O’Sullivan has been in terrific form for Cork during the league and the Rebels’ centre forward was recently named the winner of PwC GPA Women's Player of the month award for May. Another accolade to join the many she has picked up during her inter-county career. She has been very influential in the Cork attack this season, not alone highlighted by her tally of 3-9 across four games but her role in bringing the rest of the Cork attack into the game.

O’Sullivan’s role has changed slightly this season and she is, as much as possible, staying forward rather than dropping too deep.

‘You could say what has changed is that I am listening to management a bit more because they have been encouraging me to stay up in the forward line a bit more,’ the Cork ace explained.

‘I do struggle a bit with that, in terms of if your back attacks I do find it hard not to track them or not to track back and help.

‘It has been a bit of a change for me to try and stay up and not go back as much as I would have previously, but it has been a conscious move from the management to tell me to do that.

‘As a centre forward your role is to stay up in the forward line and create as much as possible, and I have been a bit more focussed on that this year than I was before.’

O’Sullivan’s game has evolved over the years, from her early days as a wing forward to her current home as a centre forward. This is her 14th season with the Cork seniors and wherever she has played, she has been influential. Cork fans will hope she’s at her best this Saturday night, too, on the big stage in Croke Park, as the Rebels look to show that they are the team that can derail the Dublin juggernaut.