Garnish GAA Club, in the parish of Allihies, is the furthest GAA club from Croke Park. Club footballers Brian Terry O'Sullivan, Rory O'Driscoll and Paul O'Neill, with Allihies in the background, took part in a Pieta House fundraiser last year.

GARNISH’S unique fundraiser and revamped website has the GAA club located furthest away from Croke Park increasing their profile at the most testing of times.

Covid-19 has affected every club in the country and tested the resolve of members both on and off the pitch. Football is still king in Beara however and one of its best-known members, Garnish, is working hard to keep their club on a positive footing amid another lengthy lockdown.

Officially founded in 1927, the rural outfit is still in existence today and renowned for producing quality underage and adult players. One of the club’s most high-profile graduates is Áine Terry O’Sullivan. The Garnish, Beara, UCC and Cork inter-county footballer wrote her name into the history books by captaining West Cork to a first ever Cork LGFA county senior football championship title in 2020.

Located in the parish of Allihies, along the tip of the Beara peninsula, Garnish possesses a long and storied tradition when it comes to Gaelic football. Due to its unique location, Garnish’s players have become accustomed to making lengthy journeys to and from training let alone travelling to matches. To put that into context, Mitchelstown represents the half-way mark whenever the club’s Dublin–based players make the long journey home.

Unsurprisingly, life has been far from easy over the past decade with rural depopulation and the club’s isolated location resulting in a shortage of players. Add in a lack of funding and few if any games over the past year and Garnish club members will tell you it is a minor miracle they have survived. In fact, less than 12 months ago, the club was on the brink of folding until Garnish’s players stepped in and took the decision to regrade.

That can’t have been an easy choice considering the club’s long history and recent pedigree which included a three-in-a-row of Beara JAFC championships between 2016 and 2018.

Kick-starting a dominant three-year spell, Garnish edged Urhan 0-9 to 0-7 to become 2016 Beara champions in Castletownbere. Finbarr Sheehan and Fintan O’Sullivan combined for five points of the winning side’s total on that occasion. Sean Terry O’Sullivan, Paul O’Neill, Brian Terry O’Sullivan and Joe Harrington also got their names on the scoresheet.

2017’s decider took place at a sun-kissed Castletownbere where the winner’s Paul O’Neill accrued 0-4 in a final won by Garnish 0-13 to 0-9. Adrigole was the venue for the 2018 Beara decider. For the second year in a row, a mere four points separated the teams on a rain-soaked afternoon in which Garnish were forced to dig deep to see off their opponents. Brian Terry O’Sullivan produced a man-of-the-match performance and Fintan O’Sullivan kicked six points to help Garnish emerge 0-11 to 0-7 winners. The Cormac O’Sullivan Cup would have resided in Garnish for a fourth consecutive year but for a narrow 2-10 to 1-9 loss at the hands of rivals Urhan in August 2019.

So, despite all of Garnish’s recent tribulations, there is hope. From the depths of despair, the Garnish community has rallied around and helped their GAA club to get back on its feet.

Returning to his home parish, Cormac O’Neill has been appointed the club’s new coaching officer. A new committee, chaired by local publican Eric O’Neill plans to expand Garnish’s reach, entice more people to get involved and have the club act as a focal point for social activity.

The response has been overwhelmingly positive thus far as the entire parish and its diaspora use social media to spread the word about a new and innovative club fundraising idea. A beautifully revamped website – check out www.garnishgaa.ie – containing a huge amount of club information has also been launched with details of what it has taken to keep Garnish going during such a difficult period. 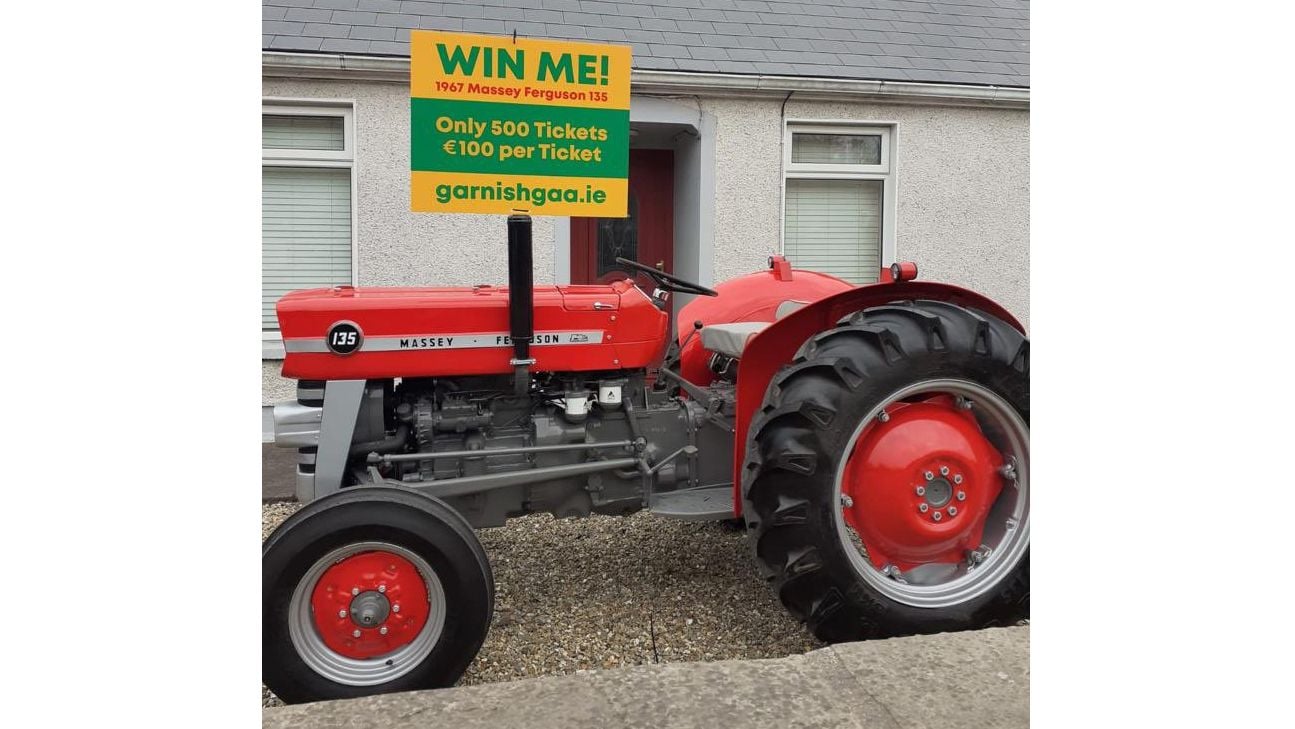 Taking pride of place on Garnish’s new website is an eye-catching by-line that states “If it ain’t red, leave it in the shed!” The Beara club have come up a terrific fundraiser where the first prize is an immaculately restored 1967 Massey Ferguson 135. The tractor has been restored following countless hours work over the past 18 months. €,5000 has been spent on new parts and materials and the tractor is valued at (approximately) €10,000. The Westlodge Hotel in Bantry has graciously sponsored a runners-up prize of two night’s bed and breakfast for two people in a deluxe room with one evening meal.

As for the beautiful Massey Ferguson 135, club stalwart, Ollie Rue O’Sullivan, who regularly makes the 200-mile round trip for Garnish matches, met up with Patsy Dineen from Cork City. Dineen’s dedicated work has restored the 1967 Massey to showroom condition.

Creditably, the Beara club has been making good use of their Twitter, FaceBook and Instagram social media accounts to spread the word about their fundraising idea. Former Kerry All-Ireland winner Tomás Ó Se helped launch a major social media campaign and since then, comedians Mario Rosenstock and Bernard Casey have added their support to the GAA club’s tractor competition .

It hasn’t been all plain sailing over the past number of years for a Beara club steeped in footballing history and tradition. Now, a revamped Garnish plans to spend any raised funds on improving its clubhouse, playing facilities and investing in the club’s underage section.

At the time of writing, Garnish GAA has already raised over €26,000, and counting. Anyone wishing to support the Massey Ferguson initiative can purchase a €100 ticket on the www.garnishgaa.ie website or click here.