Flashback to 15 weeks ago: Newcestown's Daniel Twomey is challenged by Clonakilty's Thomas Clancy during the Cork county senior football championship round one game at Dunmanway last May.( 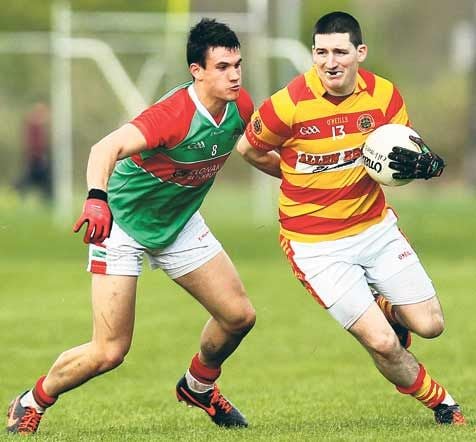 Flashback to 15 weeks ago: Newcestown’s Daniel Twomey is challenged by Clonakilty’s Thomas Clancy during the Cork county senior football championship round one game at Dunmanway last May.

FIFTEEN weeks after a most impressive first-round win over Clonakilty, Newcestown are back in action in the championship, taking on divisional side Duhallow.

The long delay, the failure of Clonakilty in subsequent championship games and the pre-occupation with hurling in the meantime, have all taken the gloss off that first-round victory. Still, they are in a much healthier position than last season when they were beaten in the first round by Douglas and then lost to Ilen after extra time in the losers’ group.

They got back into the championship with a third round victory over Dohenys by a single point, but finally bit the dust in the fourth round in a replay against Clyda Rovers.

Their first-round win this year against Clonakilty was highly impressive as they used their pace and point-scoring ability to great effect. A marvellous first half with the wind, after which they led by 0-10 to 0-2, led to a 0-16 to 0-8 victory.

Daniel and Tadhg Twomey were the scoring heroes with nine points between them while midfielders, Fionn Keane and Mark Kelly; defenders, James Desmond, James Curran, Greg Murphy and Mícheál McSweeney; and attackers Martin O’Brien, Cárthach Keane and Luke Meade all looked good. These are the players Newcestown will again look to for leadership on Sunday.

Tom Wilson has been involved with the footballers for a good few years. How does he rate this challenge? ‘It’s impossible to say what we’ll be facing on Sunday. Against a club side, you can watch them in action in the Kelleher Shield, but it’s nearly impossible to see a divisional side.

‘We really won’t know until a quarter of an hour into Sunday’s game what we’ll be facing. That said, we’ll be concentrating on our own game. We’ve been senior now for five years and have learned a lot about football in senior ranks.

‘We’ve done well and had some heroic defeats but we want to get past that stage now. We’d love to reach a quarter final. ‘Believe it or not, it’s fifteen weeks since we played Clon. Whatever boost that win gave us is long gone and it’s like starting the championship all over again. The first round is just a gateway to the fourth round and a way of avoiding relegation.

‘Last season we had to go through the back door, which was very awkward for a dual club. I’d much prefer the front door despite the long gap. It gave the hurlers time for their two championship games and now it’s up to us to make sure the footballers are up to the pace for Sunday.

‘We’ve had a few niggling injuries, but they seem to be clearing up in time, although Seán Ryan will probably be missing again. All we can do on Sunday is give it our best shot and see what comes from that.’

Tom Wilson, Kevin Long and Séamus O’Donovan are the three mentors on the Newcestown side with Conor Condon and Maurice Moore doing the coaching and training.

Duhallow, always hard to beat in the championship, have bounced back into contention this season, following a poor 2014 when they received a walkover from Imokilly, but lost by a point to Muskerry. This season they recorded an impressive 3-11 to 1-10 victory over Avondhu and then beat Muskerry by 2-17 to 1-14.

It remains to be seen whether their top forward Donncha O’Connor, who scored ten points from full forward against Muskerry, will be fit for this clash and whether Aidan Walsh will play. Corner forwards Gerry and Anthony O’Connor were also impressive against Muskerry and Newcestown will have to pay special attention to this line of attack.

PREDICTION – It’s never easy to predict how divisional sides will play in the championship, but Duhallow have been very consistent over the years. If they repeat the form of the Muskerry game they will be very hard to beat.

Nobody can forecast how the long wait since the Clon game will affect the Newcestown lads, but if they can repeat the form of that game again, they will be in with a great chance. It promises to be a thriller.