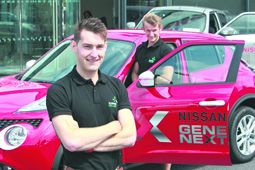 AN OLYMPIC hopeful from Skibbereen has received a huge boost on his road to next summer’s Games in Rio de Janiero.

Talented rower Paul O’Donovan (21) collected the keys of a brand new 152 registered Nissan Qashqai (taxed and insured), as a Nissan Generation Next ambassador, in Dublin on Wednesday, after he finished second in a national competition.

Bidding to qualify for the 2016 Olympic Games alongside his older brother Gary in the Irish men’s lightweight double, Paul amassed a whopping 8,950 votes, which secured him his place as one of ten Nissan Generation Next ambassadors.

‘We’ll never look back with our Nissan Qashqai,’ Paul beamed. ‘It is going to make a huge difference to what we want to achieve. I study in UCD and Gary studies in CIT. It was taking me several hours to bus it home for training.

‘Thanks to Nissan and everyone who voted for me I can now get home to Cork in just over three hours. That leaves more time to train, recover, study and to enjoy time with friends and family,’ he explained.

A highly-rated international rower who has consistently performed in the big events, Paul attracted almost 9,000 votes to finish second in the online poll where a total of almost 70,000 votes were cast for 20 candidates shortlisted from hundreds of applicants to the innovative programme.

Nissan CEO James McCarthy added: ‘We are delighted to welcome Paul to the Nissan Generation Next programme and to support his ambition to qualify for the Rio Olympic Games. Paul has proven himself to be an exceptional leader and he shares Nissan’s commitment to excellence and innovation.’