The Togher Celtic team that defeated Lyre Rovers in the Beamish Cup preliminary round at Droumleena Lawn.

Robbie Lucey fired Togher into an early lead only for last year’s competition winners to force extra-time with an injury-time equaliser.

Lyre travelled to fellow Premier Division rivals Togher, a club that last lifted the Beamish Cup back in 2019, eager to maintain their grip on the trophy.

In terms of form, both sides were positioned mid-table in the West Cork League’s top division but anxious for a cup run to ignite their respective campaigns.

Robbie Lucey almost capitalised on a defensive mix-up inside the first minute. The Celtic striker chipped an instinctive effort inches over the crossbar from 20 yards, much to Lyre’s relief. 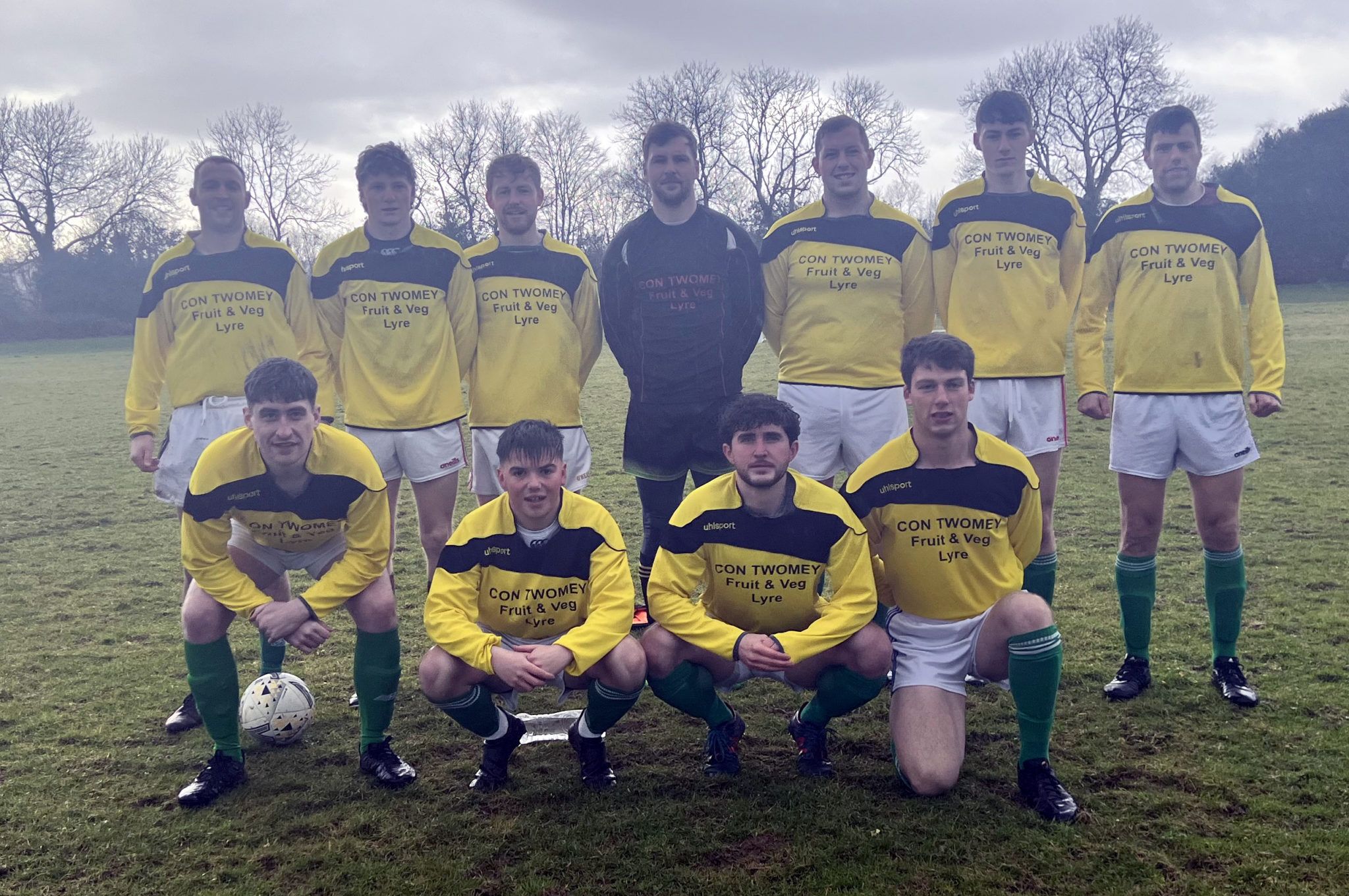 The Lyre Rovers team that relinquished their Beamish Cup title after a 2-1 loss to Togher Celtic.

Jack Cowhig struck an upright direct from a corner in response before the cup tie’s opening goal arrived after six minutes. Rovers failed to deal with a corner and Robbie Lucey found room to flick home from close range.

Creditably, the hosts weathered a difficult period and went close to doubling their advantage. Paudie Crowley brought the best out of Sean Ryan but a 1-0 score-line remained a fair reflection of the opening half hour’s action. More heavy showers made playing conditions increasingly difficult. As a result, scoring opportunities were rendered obsolete until a minute before the break. Robbie Lucey sprung Lyre’s offside trap but was denied his second goal by a marvellous Sean Ryan finger-tip save.

Togher’s Eoin Murray headed wide from a corner with 15 minutes to go but that missed chance spawned the catalyst of a Lyre comeback.

The visitors peppered their opponents goalmouth with a series of corners and crosses that Togher did well to clear. Sean White and Brian Walsh repeatedly stretched Celtic’s back four as the rain returned to add to Lyre’s difficulties.

Celtic looked set to hold out until Lyre created and converted one final chance after 92 minutes. Mark Kelly forced the ball over the goal line from a set-piece to rescue Rovers and force extra-time.

Lyre were the better team in the first of two additional periods, forcing Thomas Kingston into two superb stops. Niall Hurley headed wide at the opposite end before the teams changed ends for the final time.

Chances were hard to come by amid increasingly awful weather conditions until David Mawe was summoned from the Togher substitutes bench. The experienced striker underlined his quality by converting a late opportunity.

Maw got on the end of a slick Togher move before sliding the ball into the bottom corner to send his club through to the next round.