Thomas Mackle and Kelly Mallon claimed the King and Queen titles for three years in a row (2015-17).

BY 2015, 14 years had elapsed since the King of the Road garland adorned an Ulster champion – and Michael Toal’s second crown in 2001 a distant memory.

The emergence of Thomas Mackle would change the landscape in the most thrilling and emphatic style.

From the townland of Clonmain near the village of Grange, a son of two-time senior champion of the 1980s and ’90s, Rosin Toal, and Tyrone native Paul Mackle, Thomas is first cousin of the 2001 winner. He differs in physique and bowling methodology to the ten-time All-Ireland champion though both remain faithful to the traditional Armagh under-arm swing. Mackle’s 30-metre run-in and explosive lift-off delivers power and accuracy comparable to the powerfully built Toal’s more measured but equally effective approach.

Residency in Cork for a while, a gainful sojourn that included marriage to his beloved Lorraine Hurley from the famed Togher Cross bowling dynasty, enhanced his competitive instincts and he duelled with the best in tournaments such as the Mother Hegarty Cup at Lyre, the Willie Whelton Memorial at Grange and the annual Noel Phair event at Shannonvale. A two-time All-Ireland U18 champion, it was not then a big surprise to see Mackle come forth as Ulster senior champion in 2015.

The All-Ireland decider at Portmor that year would not go his way though as David Murphy’s extraordinary shot from ‘Bagnell’s bridge’ swung a tight contest the Brinny man’s way. Expectation was high then of a possible rematch as both gained automatic qualification the 2015 King and Queen festival – and they didn’t disappoint.

Defending champion James Buckley tested Mackle for three-quarters of their semi-final battle but the Armagh man’s strong finish got a bowl of odds victory. Eamonn Bowen (Jun) almost caused a major shock in the second semi-final, leading David Murphy for the last shots but the All-Ireland champion’s thundering last drive got him home. Germany’s Ralf Look led for a while only to falter in the closing stages.

Murphy was the favourite for the final, but Mackle produced a tour-de-force best exemplified by an astonishing fifth shot through the lines that put him a big bowl ahead. Hard as the Brinny man tried he could not force his way back and Thomas Mackle took the crown. It was the beginning of a remarkable odyssey. 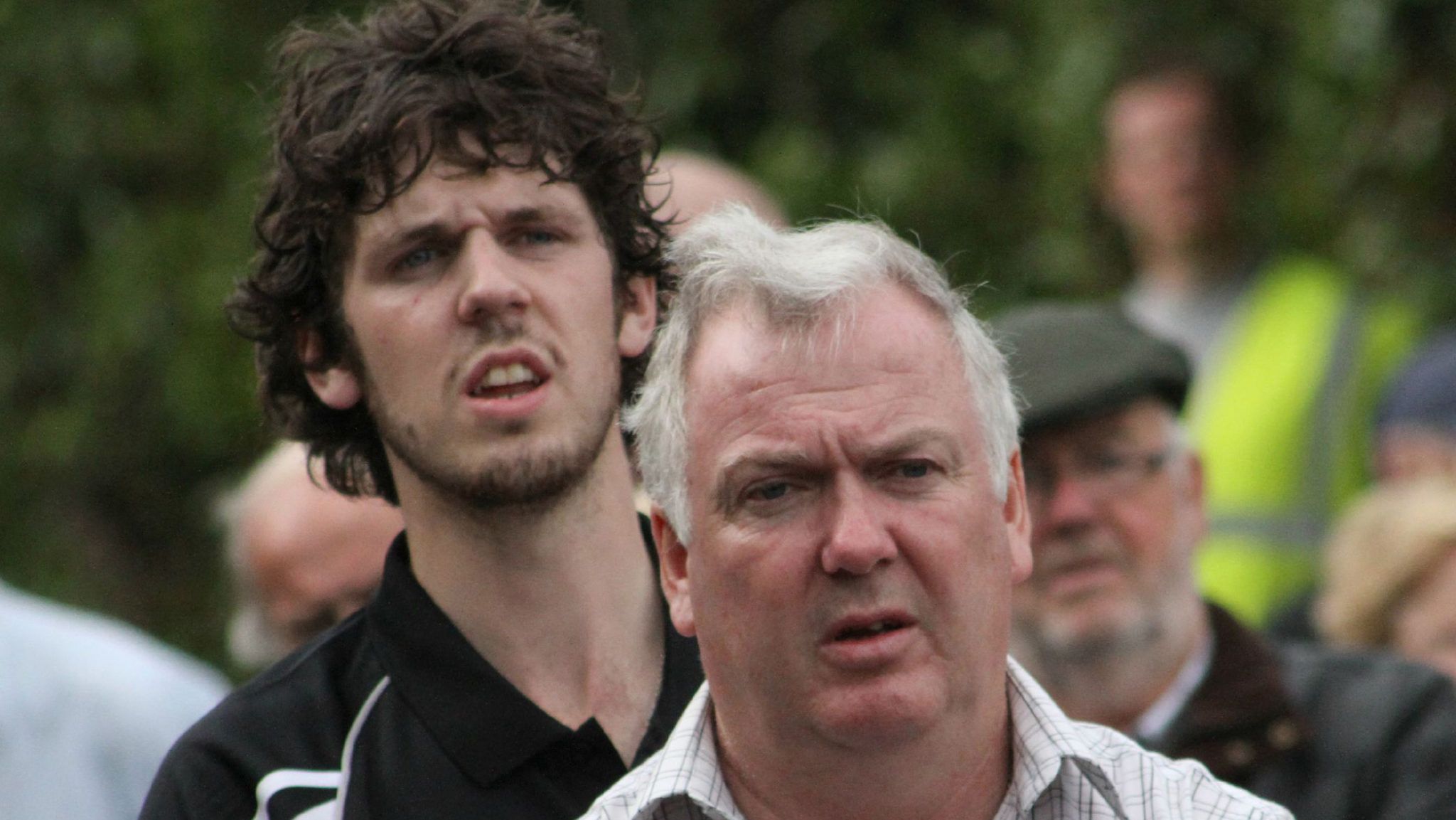 Four-time King of the Road champion Thomas Mackle studies the road with his father, Paul.

Kelly Mallon was the undoubted star of women’s bowling on the home front in 2015. All-Ireland champion for the second year running, she upped her game from the previous year and toppled reigning Queen Silke Tulk in the semi-final in which Claire O’Sullivan was also prominent for long periods. Meanwhile, Carmel Ryan reversed her county final defeat to Catriona O’Farrell with a superb late charge that also saw off the competitive German challenger Anke Klopper. The final hinged on Mallon beating two huge casts of Ryan’s in the final third. Mallon secured an Ulster double for the second time by a bowl of odds’ margin.

To 2016 and the 32nd hosting that again showcased Armagh talent. Mackle and Mallon triumphed once more, both confirming their status as national champions with additional King and Queen crowns. It was a festival of surprises and scant success for Cork representatives. The King favourite was again David Murphy, European gold medal winner for the third time at the summer championships at Ootmarsum, but he did not hit the high spots of his qualifying campaign and lost out to Mackle in the first Saturday semi-final that also included Dutchman Mark Muntel.

German Ralf Look had shown fine mastery on the road in previous visits, running even David Murphy close, but it was a shock of sizable proportions when he got the better of Munster champion Killian Kingston and Ulster’s Cathal Toal in the second of Saturday’s semi-final scores. Look’s consistency was his hallmark and allied to no little power, he was a formidable operator and proved it again when leading Thomas Mackle by a bowl and 40 metres at the half-waypoint in Sunday’s decider. In heavy rain Mackle caught the German on the short straight and eventually won by 30 metres, having only led for the second time with his penultimate throw.

The Kelly Mallon-Silke Tulk final was a 15-shot humdinger that had both finalists at their best. Tulk, leading most of the way, was caught in a spell-binding finish by the brilliant Madden champion. Mallon had to be at her best to defeat European opposition Anne Kerstin-Peters and Carlign Hammink in her semi-final while Tulk overcame Irish opposition, Munster champion Geraldine Daly and Cormican Cup winner Ciara Buckley. Adding to Ulster’s success, Colm Rafferty defeated Paul Buckley in the Jim O’Driscoll Cup final. Germany’s Fabian Schiffman and Chantel Bohlen won the Proto Mark Youths international. Mark Toal and Padraigh Nugent won the McCarthy Insurances Cup for Armagh and Holland’s Marlene Hoffman won the John Shorten Prize. A rare Cork success came in the East Cork Oil trophy when county champions’ Adrian Callanan and Stephen Sewell combined for victory.

There was no stopping Thomas Mackle and Kelly Mallon when they came to defend in 2017. Confident and assured they again conquered all before them but certainly not with relative ease. Mackle had surprisingly lost his All-Ireland crown to Paul O’Reilly in Ulster from where Bryan O’Reilly emerged the new champion. It was Martin Coppinger who was back at the helm, regaining the championship with a comprehensive win over the Ulster champion in Madden and the score of the weekend was his joust with Mackle in Saturday’s semi-final. Jos Bert Aalbers of Holland had the enviable task of vying for a final spot against the hot favourites and unsurprisingly laboured as the north and south battle raged with ferocious intensity. From the hind bowl for the last shots Mackle took the verdict from an unlucky Coppinger by a few metres.

For the first time in over a decade there was no Murphy involvement in the King shoot-out, and it was Gary Daly who triumphed in the second semi defeating Ralf Look, again dangerous, and Ulster’s Bryan O’Reilly. Daly, after a short opener, fought the final manfully but Mackle was the master buoyed no doubt by that scintillating win on the previous day.

By 2017, Kelly Mallon was a four-in-a-row All-Ireland champion and she showed why again at Ballincurrig capturing her third Queen crown on the trot with two outstanding displays. German champion Anke Klopper was Kelly’s final opponent and despite going two shots down in the early exchanges, fought it to a last-shot finish but there was no doubting the winner of the Global Catering prize. Kelly eliminated Dutch challengers Silke Tulk and Lindsay Leussink in the semi-final while Klopper overcame strong Irish representation in the form of Carmel Ryan and Emma Fitzpatrick. Colm Rafferty won the Jim O’Driscoll Cup from All-Ireland intermediate champion, Michael Harrington. FKV’s Jari Strum and Julian Heikin won the Proto-Mark Youths triple Crown and while there were Armagh doubles wins for Kevin McQuaid/Terry Mallon and Padraigh Nugent/Colm Doran.