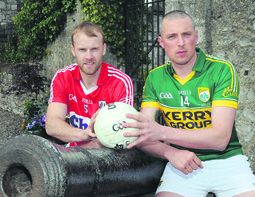 All guns blazing: Captains Michael Shields (Cork) and Kieran Donaghy (Kerry) are ready to go to war in the Munster SFC final in Killarney on Sunday.(Photo: Geoerge Hatchell)

FORMER All-Ireland winning Cork defender Derek Kavanagh has told the current Rebels – if you beat Kerry in Sunday’s Munster SFC final it will exorcise all your demons.

In Brian Cuthbert’s managerial reign, Cork have come up short in their biggest tests, with emphatic defeats suffered at the hands of Dublin (twice) and Kerry in the last 18 months.

Cork’s stock has fallen as a result, so much so that All-Ireland champions Kerry are expected to defend their provincial title in Sunday’s Munster SFC decider at Fitzgerald Stadium in Killarney – a ground where Cork haven’t won a senior football championship game since 1995.

Nemo Rangers clubman Kavanagh admits the odds are stacked heavily against Cork causing a shock result, but he believes a victory on enemy soil will be the ideal statement result to ‘wipe the slate clean’.

‘Those defeats (against Dublin and Kerry) linger in your mind. You can’t knock them away and forget about them, but if you get one big win and beat Kerry in Killarney for the first time in 20 years then that really would wipe the slate clean,’ Kavanagh told The Southern Star.

‘Cork have the potential and they can wipe the slate clean and rid themselves of the demons of those games against Dublin and Kerry in one go if they win on Sunday.’