KIERAN McCARTHY: Putting your individual events aside, how much do you enjoy competing in relays?

JOAN HEALY: I absolutely love relays. I’ve been running international relays since the World Juniors in 2008 and I’ve been a member of the senior relay since 2011. There’s something about them that just brings out an extra few percent. Being an individual sport, it’s our only chance to do something for a team so I think it automatically makes people run that little bit faster.

KIERAN: What’s the secret to a fast relay team?

JOAN: One word: experience. Having relay experience on an international stage is invaluable. Having four really fast sprinters is important but it’s more important to get that baton around safely. The more experience on the team, the more likely it is for the baton to get around. Practising changeovers a lot adds to that as well but, as we’ve seen at many championships before, teams like the USA have unbelievably fast individuals but they don’t often get that practice in and the baton doesn’t make it around. 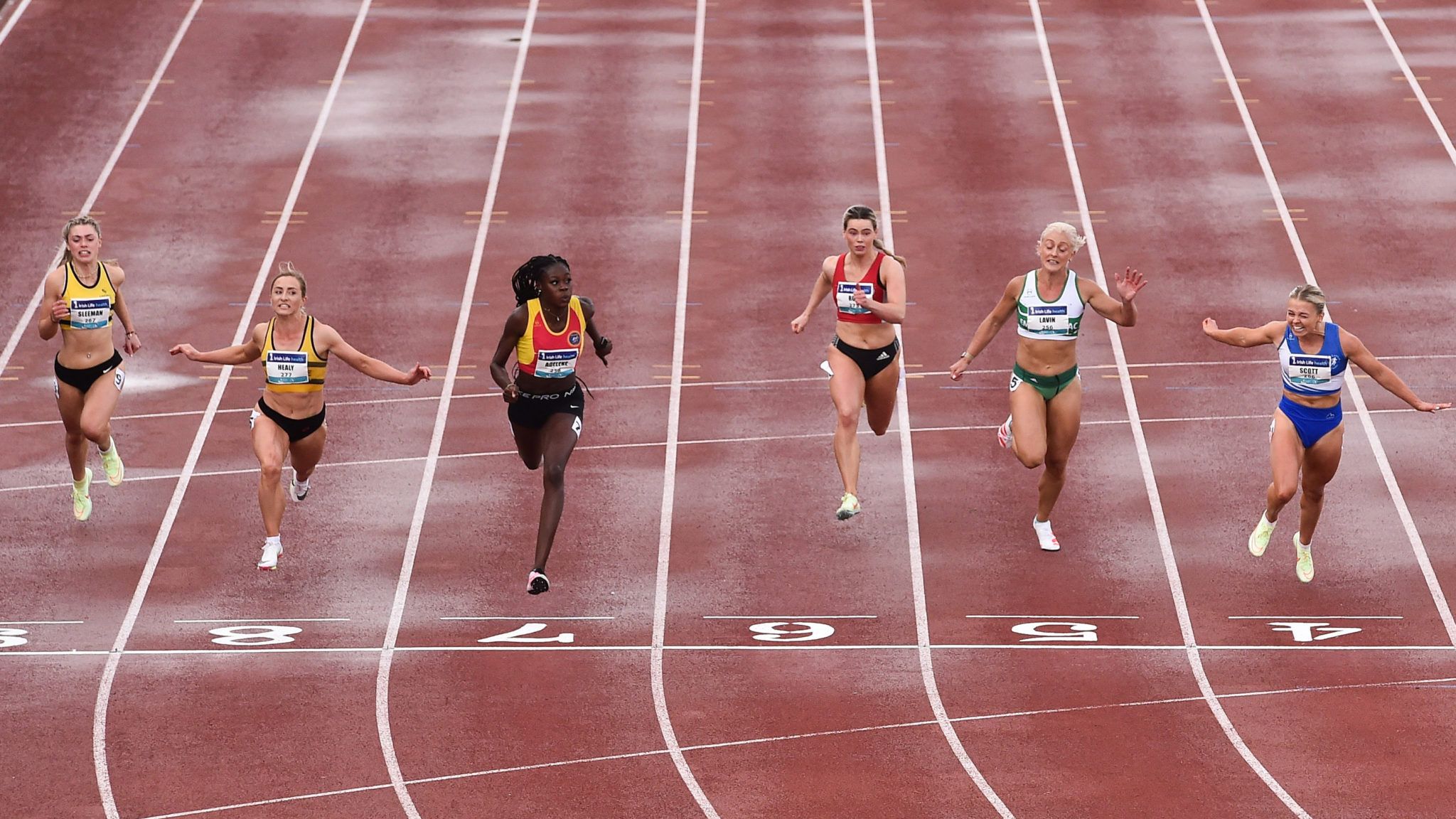 KIERAN: Explain to me  why the order of the runners is so important in a relay?

JOAN: It’s great to get a group of sprinters who are versatile and can slot into any leg but sometimes certain sprinters are just made for a certain leg of the relay. The majority of my international experience has been on the first leg. I’m small and powerful, and I run a really good bend. Being good on the start is also crucial so a team would be looking for a solid starter.

The second leg usually goes to someone who might be that little bit taller and that athlete would usually do 200m as well. You try to make the most out of this athlete by giving them the baton early in the zone from the first leg runner, and then exchanging it to the third leg runner later in the zone. So technically the second leg runner would run around 120 metres.

Third leg is similar to the first leg runner. More suited to a smaller athlete who can work the curve. This is also where the stagger starts to unwind and you can start to see where teams are positioned so this leg needs to be worked really hard. The last leg would go to someone who would be strong at the end of a 100m or maybe a 200m athlete who can really work to the finish line.

JOAN: I would like to think I’m quite versatile when it comes to the relay. I’ve run on every leg at internationals over the years but most of my experience has been on the first leg. Third is often the least liked leg but, being honest, I would love to have a go off it. I really like the bends.

KIERAN: You know the relay inside out and have huge experience, so what’s been your most memorable relay race?

JOAN: That is a tough one because there have been a lot but the relay I’ve gotten the greatest buzz from was at the European Athletics Championships in Berlin in 2018. The stadium was amazing, it was absolutely packed and the crowd was so loud. I ran the first leg there and passed the baton to Phil. 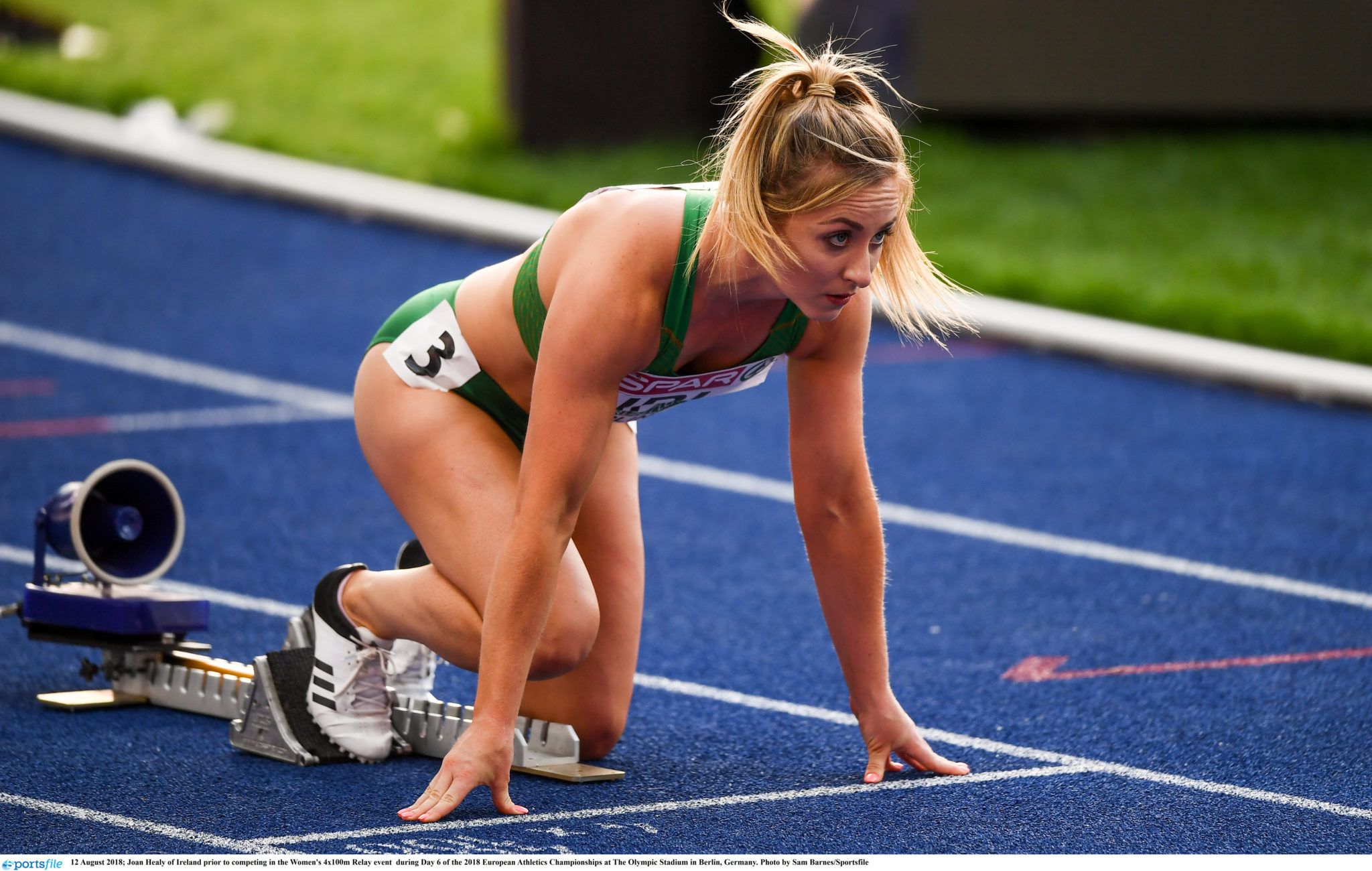 Joan Healy is part of the Irish women's 4x100m relay team at the World Championships.

KIERAN: The baton plays such a key role. How much work goes into perfecting the baton change?

JOAN: Baton changing can get really technical as the aim is to lose as little speed between the incoming and outgoing runners. It can be hard to get a lot of practice in as team members are in different counties and in some cases different countries. The team will be in Oregon ten days prior to the race at these Worlds so hopefully we will get a good amount of practice in.

KIERAN: Explain to us about exchange zones and how they work?

JOAN: Changeovers is where it all happens. The changeover zone is 30 metres. It’s marked with two yellow lines and the baton must be exchanged between the two yellow lines. The outgoing runner would stand just inside the first yellow line but athletes on the second, third and fourth legs put a piece of tape down on the track before this yellow line. This is the most important part.

Where to put that piece of tape is measured out by the outgoing runner’s feet and how many feet is determined by the speed of the incoming runner versus the outgoing runner. You must also factor in things like where exactly you’d like the baton to be exchanged in the zone. We must also keep in mind that if anything were to go wrong, those marks will also ensure a safe changeover (i.e. it's passed between the two yellow lines). That’s where a lot of the practice comes in as we’ve to play around with these marks because they can change a lot depending on whether athletes’ speed improves as the season goes on. You also have to factor in that on the day of the race, the environment and the atmosphere can encourage people to run faster than they may have run in practice so you have to account for that when creating the marks.

KIERAN: Sticking to the track for a moment, which are the best lanes to run in – and why?

JOAN: Lanes really depend on the event. For 60m or 100m it doesn’t really matter as there’s no stagger to consider and everyone is running in a straight line. For events like 200m, 400m or 4x100m relay it’s nice to have middle lanes from three to six as you’re in the middle, you have someone to chase but also trying to get as far away from the person inside you.

KIERAN: Including yourself, pick your dream 4x100m women’s relay team?

JOAN: My dream relay team? It would be myself, Rhasidat Adeleke, Molly Scott and, of course, my sister Phil. We are going to be pretty close to that in Oregon, we just won’t have Phil but hopefully Sarah Lavin will take her place. 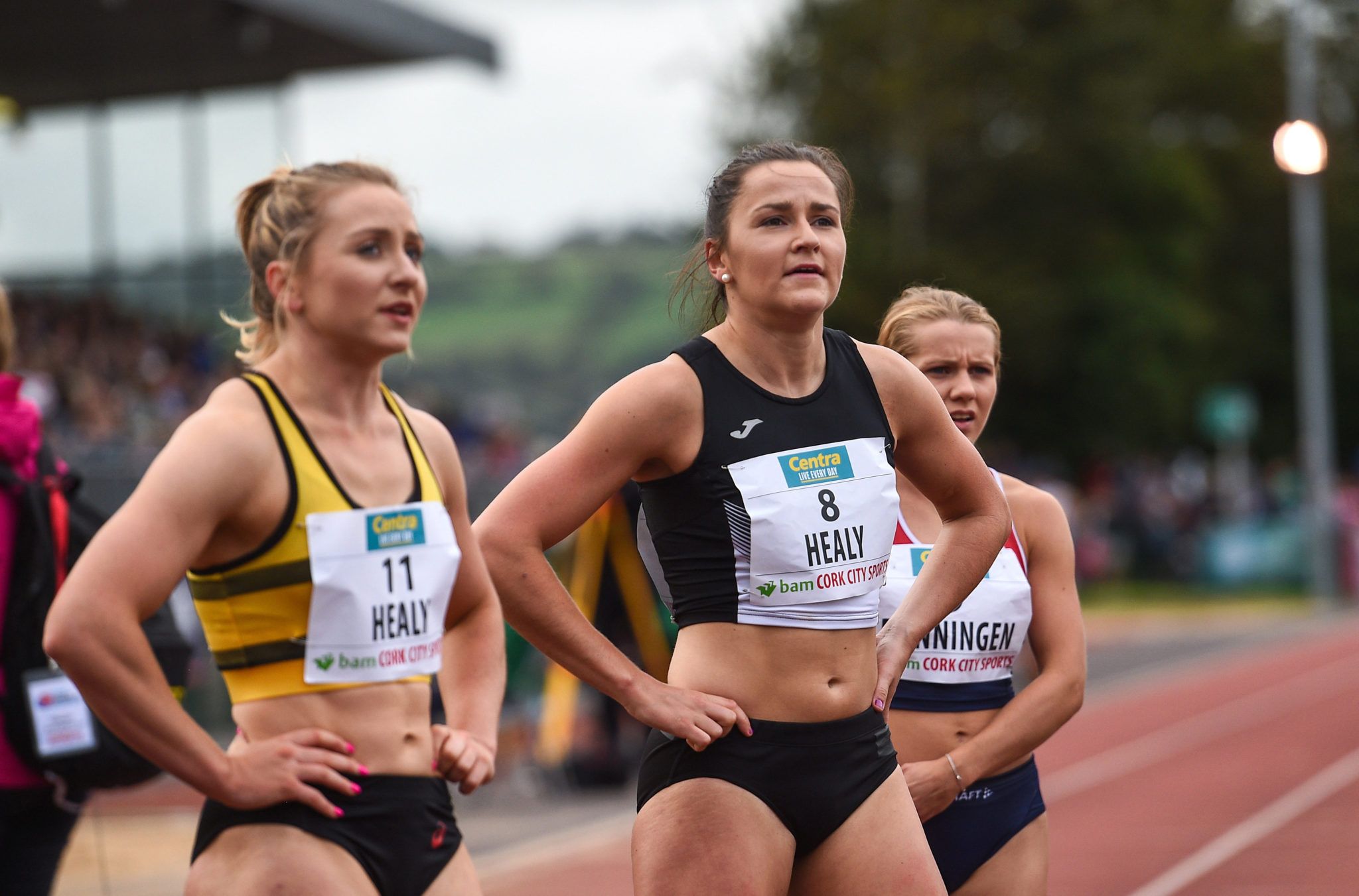 Joan Healy (left) and her sister Phil (right) are the fastest set of sisters in Ireland right now.

JOAN: Watching the USA or Jamaica is always exciting. I love Shelly-Ann Fraser-Pryce so I’m probably drawn a little more to the Jamaican 4x100m. That being said, the women’s 4x400m relay at the Tokyo Olympics was incredible. The USA had an unbelievable team with Allyson Felix, Athing Mu, Sydney McLaughlin and Dalilah Mohammad. They are unbelievably talented athletes in their own events (200m, 400m, 800m, 400m hurdles) and have broken a lot of barriers in women’s track and field, so to see that calibre of athlete on one relay team was always going to be fascinating.

KIERAN: This month's World Athletics Championships are in Oregon, but where is the one place in America you would love to race?

JOAN: One place I would probably like to race outside of Eugene would probably be Florida. Lots of fast times come from there and track and field is so big in America, it would be exciting to experience. I’m really excited to race in Eugene.