Joan Healy in action in the women's 60m during the AIT International Grand Prix 2020 in Athlone.

Ahead of the national senior indoor championships this weekend, KIERAN McCARTHY caught up with the in-form Joan Healy to learn how the Ballineen sprinter has battled back from a frustrating 2019 season that saw her contemplate packing in athletics

JOAN Healy is one of the fastest women in Ireland and she also works a full-time day job.

At the recent AIT Grand Prix in Athlone on a Wednesday night, she raced to third place in the women’s 60m final in 7.34 seconds. Less than two hours earlier, Joan won her heat comfortably in 7.38.

‘I was pleased with the run in Athlone considering I had to do a day’s work beforehand,’ she explains.

Joan is a secondary school teacher at Terence MacSwiney Community College in Knocknaheeny. She hopped into the car after work, drove to Athlone, competed in a world-class event, jumped back into the car and drove home afterwards, and she was back into work on Thursday morning.

There’s not much time for rest and recovery there, yet Joan is still one of the fastest women in Ireland.

She equalled her personal best (PB) set in 2018, the same race Foster ran 7.27, and her 7.31 is also just 0.01 off the qualifying standard for the World Indoor Championships.

That 7.31 also places Joan fourth on the all-time Irish list.

She’s fast. Very fast. And that inevitably leads to one question: how fast could you run if you were a full-time athlete?

That question has done more laps in her head than she can remember, and it was there again 12 months ago when she considered packing in athletics.

‘Last year was a disaster from start to finish,’ the 27-year-old admits.

‘In the weeks that followed the nationals I considered giving it up,’ she says.

‘I found it really hard to juggle everything with a full-time job and the demands of training. There is such depth in women’s sprinting at the moment and there are so many people coming up, I was asking myself, “how am I going to compete with this?”’

It was a frustrating period. Athletics has been her life since she was ten-years-old. She was the trailblazer in the Healy house, her younger sister Phil (now the Irish 100m outdoor and 200m, outdoor and indoor, record holder) was playing catch-up. But Joan’s 2019 indoor season was a struggle.

‘When I wasn’t doing well last year, and I am getting older as well, you do ask yourself, “Are my best days behind me?” and “What do I do now?”,’ she admits.

‘I really found it hard to get my head around the thought that if I did give it up, what would I do with myself?’

This is where Phil stepped in to help her older sister.

‘I really have to credit her, Phil brought me out of that and helped to reset my focus again. She helped me out with the mental side of it, she brought the passion back again,’ Joan explains.

‘Watching her throughout the summer after she broke her foot and seeing what she came back from, she showed everyone that it can be done and that inspired me again to push on for the winter.’

Joan and her coach Alan Mahony made a few changes. They brought strength and conditioning coach Kevin Tattan on board.

‘That’s really what we worked on over the winter, trying to find the balance between work and training so I’m not exhausted all the time.

‘I can’t push my body to the levels that a full-time athlete can because I will break down. We looked at ways that I can recover more and how to get more out of each session instead of training.

‘We focussed a bit more on speed and general fitness, and trying to keep the fitness up so that the injuries stayed away. We kept those niggles away and I was able to focus on my speed. I’ve come into the indoor season running as fast as I have ever run.’ 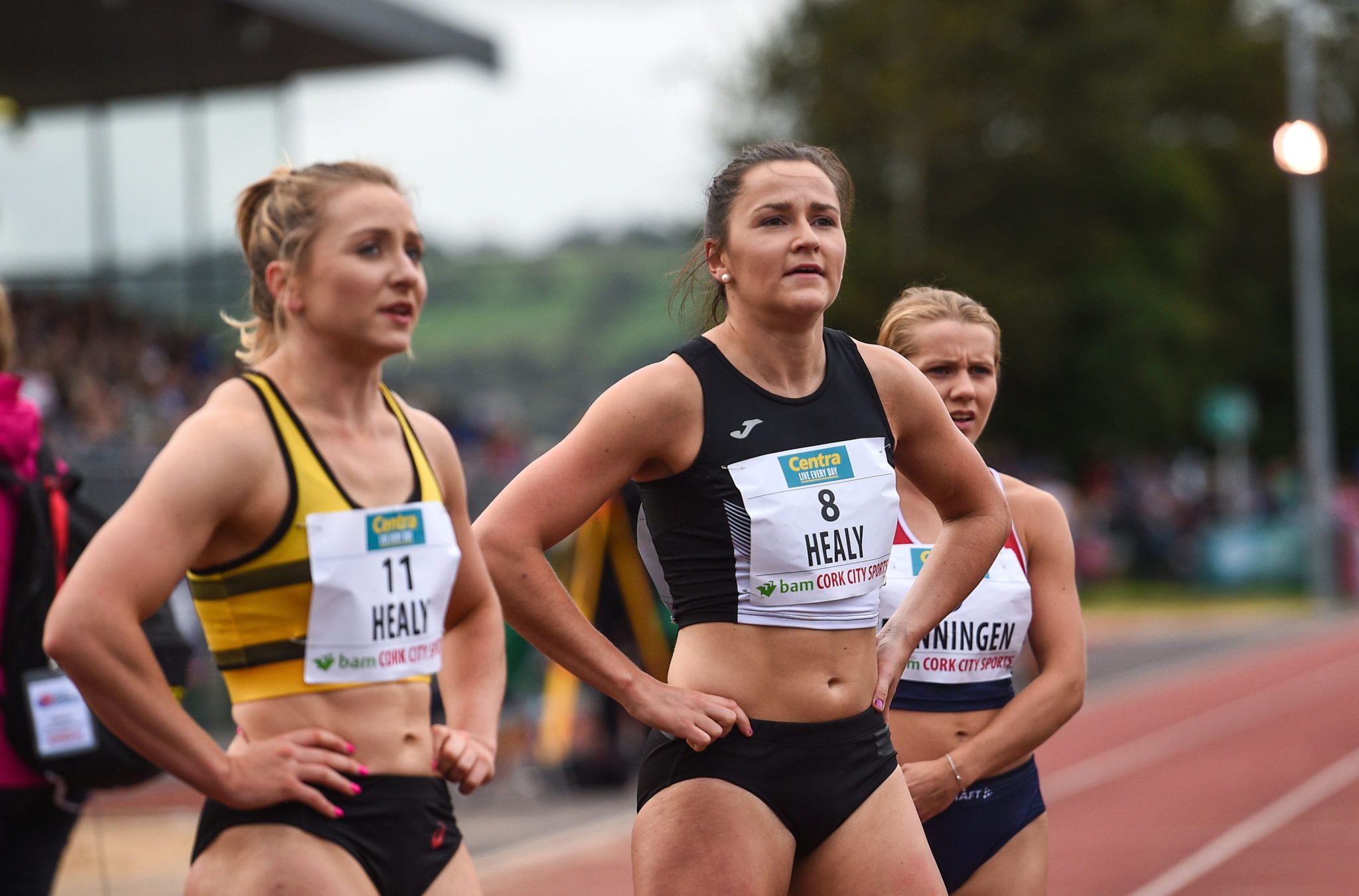 Joan Healy (left) and her younger sister Phil after racing in the 100m at the 2019 Cork City Sports at CIT Athletics Stadium in Bishopstown.

When Joan ran 7.31 in her first race of the season on January 11th, that was a result of an injury-free block of winter training that went really well. She knew she was in good shape and her time confirmed that. It was an equal PB. That was followed by 7.37 in a race in France and then 7.37 and 7.34 in Athlone.

‘They are really consistent races and that is promising because in the past I would have ran a fast race but it would have taken me awhile to back it up. This season I am really consistent, staying within a few hundredths of a second of the 7.31,’ she says ahead of the national senior indoor championships this weekend in Dublin.

The former Bandon AC sprinter, now with Leevale AC, is targeting gold in the women’s 60 metres. It won’t be easy with rising Irish sprint sensations Ciara Neville (who beat Joan by 0.01 of a second in Athlone) and Rhasidat Adeleke also in the mix, but the Ballineen woman is definitely in the reckoning.

‘The national record is certainly within my sights but the main aim for the national championships is to go out and win it,’ she says.

‘You have to forget about the times and just hope they come with the performance.

‘It is definitely within my grasp, if not at nationals it certainly will be my aim throughout the season and it will be  an aim for next season again as we will have World championships and European championships next year.’

Twelve months on from her worst national indoors, she’s confident of better this time around. There’s more to come from her.

Joan does admit that initially the plan was that this would be her last year in athletics.

But those plans have changed.

She’s running too fast to close the door on the sport she loves. Also, she wants to race at world level.

One of her big targets this year was the 2020 World Indoor Championships in China this March, but they have been postponed to March 2021 due to coronavirus fears.

‘The aim for this season was to qualify for the world championships and even though they are cancelled I still hope to get the qualifying time (7.30),’ she explains.

‘It was probably going to be my last year of athletics and I was hoping to finish with a world championships, but since they have been put off for a year I’m going to have to go for one more year.’

With the outdoor season approaching, there are also the European Athletics Championships in Paris to aim for, as well as trying to qualify an Irish women’s 4x100m relay sprint team for this summer’s Olympics.

‘We are probably going to need to get under the 43-second mark which will be a tough task, but we will give it a try,’ Joan says.

But first it’s the national indoors this weekend with the Healy sisters (Phil is racing 200m and 400m) looking to dominate the sprint distances.