Jack Crowley came through the ranks at Bandon RFC and Bandon Grammar School.

WHEN you're assessing a #10, a lot of the conversation boils down to a fairly rudimentary question.

‘Are they any good?’

And the answer is usually – yeah, they are. In some ways, the question itself is pretty self-selecting because most #10s will be, by default, the best player available to the coach. That is to say, backs with the ability to kick, handle the ball off both sides, goal kick (not always, but usually) and, most importantly, direct the play over a series of phases and interject with good decision making and execution when the situation demands.

Finding a player to be your #10 at an age-grade level can literally be as simple as seeing who your best back is and moving them to that pivot position. If you think of the #10 jersey as the ‘pivot’ then the true importance of the position will become clear to you.

What is a pivot? Depending on the dictionary and the exact definition, it can mean ‘the central point, pin, or shaft on which a mechanism turns or oscillates’ or ‘the central or most important person or thing in a situation’. For me, that defines your primary playmaker – everything revolves around them. Your primary playmaker doesn't always have to wear the #10 jersey but they must be someone that directs and guides your attack at all times.

The attack must ‘pivot’ around this player. They must move players into positions and glide between different positions to generate the kind of ‘pictures’ they want. It isn't just about reacting – although that's important – it's about creating situations through your actions that lead to gain line advancement, an improvement in territory and, ultimately, points being scored.

Let’s just say it’s an important position. A very important position. Anyone who manages to create a bit of noise about themselves while playing there at an underage level is a bit of a rarity, especially outside of the usual places. So when I tell you that I've heard Jack Crowley coming from a long way off, believe me. Be it with Bandon RFC or his assured run as captain with Bandon Grammar in the Munster Senior Cup in 2019, you don't have to dig too deep to find people talking about Jack Crowley long before he burst onto the scene with Cork Con and, latterly, the Irish U20 side. 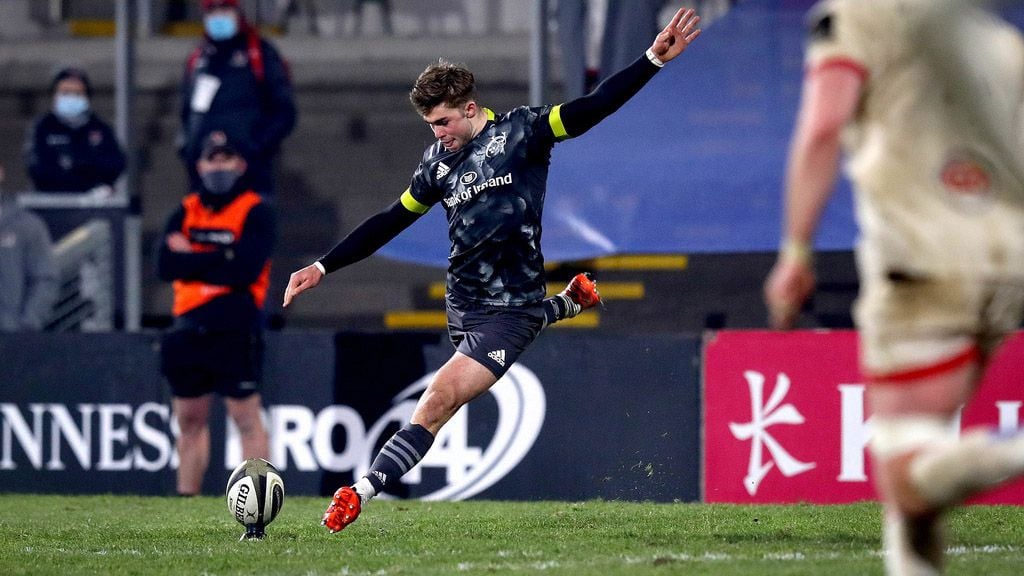 Jack Crowley made his debut for Munster earlier this year.

We’re used to players come through from elsewhere in Munster. Places like Pres with Ronan O’Gara, for example. So a guy dragging a heap of attention with him while playing at #10 for Bandon Grammar is something of a rarity. It’s not that there isn’t talent there, plainly there is, but it’s not usual to see a guy coming through that route. That alone tells you a lot about Jack Crowley and how multifaceted his skillset is.

To start with, Crowley wasn't always a #10. A lot of his underage rugby was played at scrumhalf and in other backline positions. In an interview with this very newspaper last year Crowley’s underage coach at Bandon RFC, Bob Brady, said this of Crowley.

‘You could see from very early on that he can play anywhere across the backline,’ Brady explained.

‘No matter where he played, he shone. He was equally as good as a nine, but he has turned out to be a better out half. If he had continued at nine, he would have made it there too.’

He's got a lot of the qualities you'd look for in a flyhalf prospect. Crowley is a good runner of the ball, has a slick pass off both sides, and really good offensive instincts when it comes to seeing space where it is and where it might be.

So it's clear that Crowley is a talented kid – one look at his Six Nations campaign would tell you that – but that talent was visible from a way back. So much so that a smart coach like Brady moved him from the second most important attacking position on the pitch – scrumhalf – to the most important attacking position and Crowley kept producing the goods.

To put that in perspective, if you've got a good scrumhalf you'd want a very good reason to reduce the number of touches they have on the ball to move them back in the hope you'll see an increase in overall offensive production.

A scrumhalf touches the ball 70-plus times a game. Your flyhalf might interact with the ball 30 times a game but they are the pivot around which your entire attacking game revolves. That kind of responsibility is not for every player, no matter how talented, so Crowley's rise since that point is a testament to how talented he actually is.

So of course he was added to the Munster Academy over the summer of 2020. It was as close to a no-brainer as it gets in the development game and he’s impressed consistently in every A game opportunity he’s gotten this season. Game time has been desperately limited this season – for everyone – but the one consistent has been Crowley impressing in all facets. His performance for Munster A at home to Leinster A earlier in the year was a particular highlight and you only have to go back as far as early March to see Crowley kicking penalties, assisting tries with chicken-wing offloads and running guys over in contact against Ulster A.

He also made his senior debut against Ulster up in Ravenhill and, by all accounts, turned down the advances of Ronan O’Gara’s La Rochelle to stay and establish himself at Munster over the next few months and seasons. It’s telling that when people talk about possible successors to Johnny Sexton, Crowley’s name is thrown into that mix already, such was the heady impact of his performances for the Irish U20s pre-lockdown. There’s a lot of expectation around Crowley but the one constant I’ve seen in him over the games I’ve seen him play is this – he has no fear. That alone will take this Innishannon man a long way.