DARRAGH McElhinney is feeling in the best shape of his life ahead of his biggest race in two years.

The Glengarriff athlete will compete in the men’s 5000m final at the European U23 Athletics Championships in Talinn, Estonia this Saturday night.

This is the race that the 20-year-old UCD student has been targeting since he won a bronze medal in the 5000m at the European U20s in July 2019.

‘It’s the big race of the year and it even goes beyond that, it’s the big one of the last two years,’ McElhinney told The Southern Star.

‘Realistically, I won’t have a race of this magnitude anytime soon again. You have three years at U23 level and these championships run every second year. If you are lucky you get them in your first year and your last year, but I am getting it in my middle year.

‘This is such a good opportunity because you are only racing guys who are your own age or one year older. Since I came third in the European Juniors two years ago I have been targeting this. I want to do better than I did in Sweden.’

The expectations on McElhinney are different than they were for the 2019 European U20s. There, he was the top-ranked 5000m men’s athlete and favourite for gold. The West Cork sports star brought home a brilliant bronze but he has never hid his disappointment with that result. Now, we’re two years on in his development. He’s older, wiser and more experienced. He’s also fitter, faster and stronger. McElhinney is in a good place ahead of the big race.

‘I can pretty confidently say this is the best shape I have ever been in,’ he said.

‘It’s been a very busy summer for Irish athletics with Olympic qualification points up for grabs, but I haven’t been in the thick of it at all. I have been doing my own thing. I’ve been at home training and running a couple of races to get me prepared because I want this weekend to be my best performance.’

The signs he has seen in training are encouraging. Everything has been planned with this Saturday night’s 5000m final in mind. That’s why we haven’t seen him in action too much in recent months. 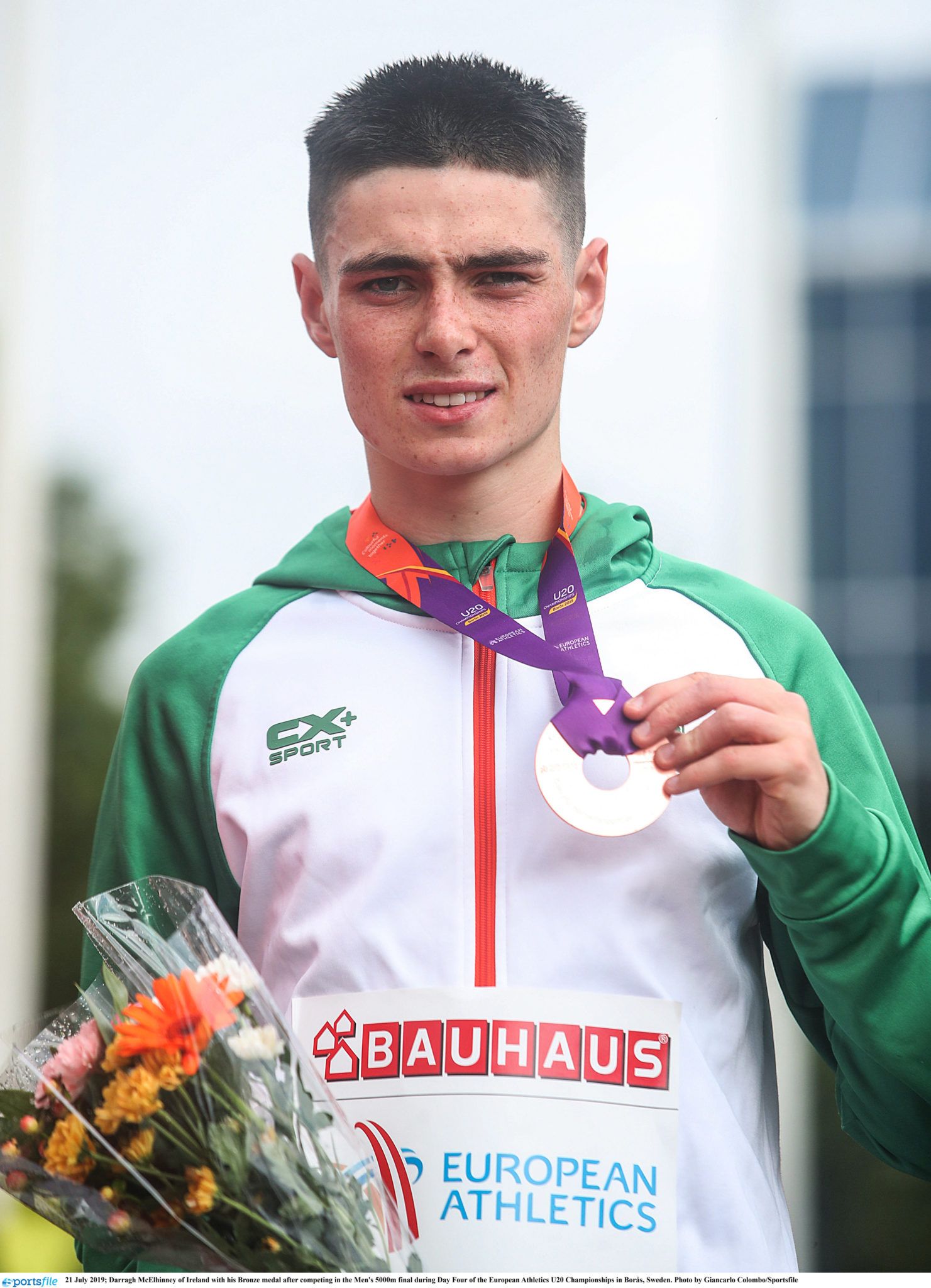 Darragh McElhinney finished third in the men's 5000m final at the 2019 European U20 Championships.

On May 25th, 2019, ahead of the 2019 European U20s, McElhinney ran his 5000m PB, 13:54.10 (the first Irish teenager to ever break the 14-minute barrier), in a meet in Belgium. The European U20s were on in mid July so that summer he was trying to maintain his impressive May form for almost two months, and it didn’t work out. This time around he has sat out a lot of events because he has one race in mind.

‘I have to do what is right for me,’ McElhinney said. ‘I was watching all the races in May and June with envy, and there were a lot of fast times and I would have loved to have been on tour – but my coach and myself are planning for my peak to come in July, not in May.’

At the recent national senior championships McElhinney finished fourth in the men’s 1500m, less than two tenths of a second outside the medals. He didn’t defend the men’s senior 5000m title he had won last year, but instead used the shorter 1500m to sharpen up ahead of the European U23s. Again, there were encouraging signs, though the warrior in him was disappointed not to win.

‘I know more about myself now and I know what I can handle. At the nationals I closed the last 600 metres in one minute and 23 seconds, I had never run that fast before in my life. It’s small things like that, because I did that in a race against top-class guys I know I can do it again,’ he explained.

One of the top talents in Irish athletics, McElhinney has been making headlines since his early secondary school days and he hopes to be back in them again this Saturday night. He’s going into this final under the radar. His 5000m PB was set over two years ago. He’s developed a lot since then.

‘The aim is to be in there and try to win it. I feel I am capable of that,’ McElhinney said.

‘It’s different to two years ago at the Juniors when anything else but a gold was extremely disappointing, as it was when I came third. If I was to come second or third now, I know I would have the initial disappointment that I didn’t win, but it would be a bigger achievement than it was two years ago because a lot of the guys now will be a year older than me.’

Tactically, however the 5000m final unfolds this Saturday night, he is confident he has the tools and experience to react. The podium is within reach.