A FIRST appearance in the semi-finals of the top-tier Cork football championship since 2010 awaits Clonakilty after an amazing comeback saw them past Duhallow at Páirc Uí Chaoimh.

Just after the second water break, this Bons Secours Hospital Cork Premier SFC semi-final looked to be going the way of the north-western division as they led by 1-9 to 0-6. However, they were not to score again – possibly due to fatigue as so many had played for the clubs earlier in the weekend – and Clon reeled them in, point by point, culminating in Seán White’s winning score.

Clon selector Eoin Ryan was delighted with how the team had eaten into the deficit score by score, keeping their composure to book a first semi-final spot since 2010, when they were defending champions.

‘I didn’t think we were beaten,’ he said, ‘but I thought we were in trouble.

‘You’re never beaten until the whistle is gone and that’s what we’re trying to drill into the lads. You just keep going, keep doing your job and, in fairness, they put in a brilliant last 15 minutes.

‘It’s a big step forward for us to get to a semi-final, obviously, not having been there since 2010.

‘We’re delighted with the win, we’ll go back and look at everything and sort ourselves out for the next day.’ 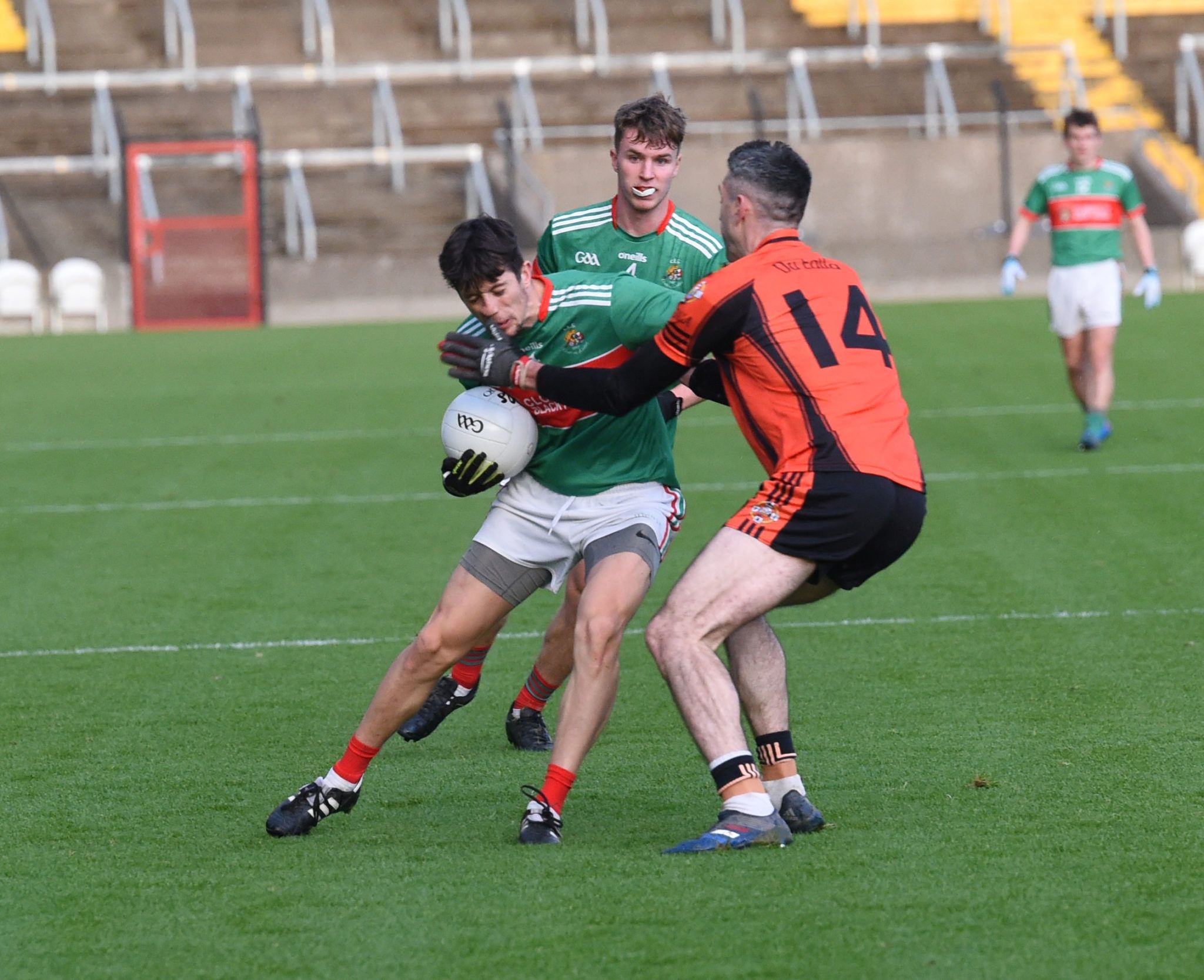 While Clon enjoyed a lot of the early possession, despite playing into the wind, they struggled to make it count until midfielder Joe Grimes – impressive throughout – pointed in the 14th minute.

The lead was fleeting however as Duhallow, who had struggled to make any real attacking foray up to then, replied with a goal. From a direct ball by Séamus Hickey, Jerry O’Connor claimed a mark inside and then fired past Mark White to give them the lead at the first water break.

With veteran Donncha O’Connor in excellent scoring form in the second quarter, Duhallow pushed on and, while Clon had replies from Ross Mannix and Dara Ó Sé, a 1-5 to 0-4 half-time lead had the divisional side in command. Jerry O’Connor extended the advantage further on the restart but Clon refused to give in.

Ó Sé continued to send over frees to ensure that Duhallow couldn’t pull clear and Grimes almost had a goal, just failing to reach Conor Daly’s return pass after good inter-play with the substitute.

Gearóid Barry swept effectively in front of the Clonakilty defence and the massed ranks ensured that Duhallow were never able to ride roughshod through the cover, where Thomas Clancy was strong all afternoon. Nevertheless, Duhallow’s depth of talent looked to be doing enough to keep them in front.

It was 1-8 to 0-6 at the break, with Kevin Crowley extending the lead to six, but it was, in effect, a declaration and Clon kept the target in their sights. Two Dara Ó Sé frees sandwiched a point from Daly and goalkeeper Mark White acted as a quasi-playmaker, getting forward at every opportunity to provide an extra body.

Two in a row from Ó Sé cut the gap to a point before Seán McEvoy – set up by the tireless Liam O’Donovan – levelled and still Clon weren’t don’t as Jack O’Mahony’s delivery broke inside and White was able to point from a tight angle.

They had the lead for the first time since early in the game and Duhallow couldn’t claw their way back to parity, meaning Clon now face Douglas.

It’s a feather in the cap of this young team, showing that they can win when it matters.

‘Once we set to our task, we were good in the last quarter. We did kind of panic a bit, we were trying to create goal chances when there was no need at the start of the second half.’

Next up are Douglas on November 14th, again at Páirc Uí Chaoimh, and Clon will look to cause another shock.

‘We’ll be underdogs but don’t mind that. We were underdogs for the last three games and again against Duhallow, we’re used to that, that won’t bother us!’ Ryan added.