John Cleary has achieved great success as a manager and he also played a starring role in Cork's 1983 Munster final win.

JOHN Cleary was the lightest player on the pitch that day – but he packed a hell of a punch.

The Castlehaven sharp-shooter had only celebrated his 20th birthday the previous month and this was his first Munster senior football final in his first season with the Cork seniors, but he looked at ease on the big stage.

He kicked 1-6 against, possibly, the greatest football team ever seen.

While Tadhgie Murphy ultimately proved to be the hero, Cleary played a starring role in this giant-killing at Páirc Uí Chaoimh.

Even the football gods knew something special was in the offing that day. The weather was almost biblical. The thunder shook the air. Forks of lightening crackled overheard. The rain was incessant.

Travelling up from Castlehaven that morning was an adventure itself for Cleary.

‘I always remember before the game, Joe McGrath said, “lads, I prayed for rain and look what we got”.

‘There was no pressure on us whatsoever.’

Kerry had bossed Munster football for the previous eight seasons, whereas Cork were coming from a low ebb after suffering some heavy hidings along the way.

Cork went into the 1983 Munster football final off the back of an unconvincing display against Clare in the semi-final. The Rebels won 1-11 to 1-5 in Ennis, but that flattered Cork. In the Cork Examiner, Jim O’Sullivan wrote: ‘So bad were Cork that it would be difficult to recall a comparable display in a semi-final over the last decade.’

A bright spot was John Cleary on his senior championship debut. At left corner forward, he kicked eight points, two from frees. He was the reason Cork survived and weren’t embarrassed.

‘We went into the Clare match and there was talk that they could beat us, which was unheard of at that time,’ Cleary recalls.

‘We were lucky enough. It was only in the last six, seven minutes that we pulled away. It meant we weren’t given a hope for the Munster final.’

Cleary had been on the Cork minor team that won the All-Ireland title in ’81. The following year with the U21s, Cork conquered Munster. The West Cork man was called into the senior set-up for the ’82-83 national league that started before Christmas.

‘We didn’t qualify for the semi-final of the league but we had a reasonable league,’ Cleary says.

Among their Division 1 results, Cork beat All-Ireland champions Offaly, who had stunned Kerry in the 1982 final with that famous Seamus Darby goal. Kerry didn’t learn their lesson. In the 1983 Munster final, lightening found its way to strike twice.

There was nothing expected of Cork. It was a no-lose situation. This was a star-studded Kerry team – Jack O’Shea, John Egan, Páidí Ó Sé, Ogie Moran, Mikey Sheehy, Bomber Liston, they were all there.

The crowd was small at Páirc Uí Chaoimh, maybe around 15,000, so there were vast gaps around the terrace though the covered stand – given the weather – was packed.

By the end, this was a classic were-you-there moment.

‘Joe McGrath and Eamonn Ryan were in charge, they brought something different and new. Joe was all bubbly and Eamonn was a great coach. We went in under no pressure. At that time it was knock-out so it was the end of the road if you lost.’

Cleary didn’t feel any pressure either. Cork had lost the previous eight Munster finals to Kerry but there were no battle scars for the Castlehaven man. He was young and chomping at the bit to have a go off this Kerry team of legends.

‘When you’re a young fella, you play with no inhibitions and a sense of freedom, so whether it was Páidi Ó Sé or Ger O’Keeffe marking you, all you wanted to do was go out and play,’ Cleary says.

Ger O’Keeffe was on him that day. Cleary found his feet with two early points before he struck for a goal.

‘The ball came in, Dinny Allen broke it really well, I ran into space and took a chance, and it broke in front of me. I saw Charlie Nelligan coming out, I slipped it along the ground and luckily it went in,’ Cleary recalls.

‘It was a special feeling to score a goal early in your first Munster final against that great Kerry team.’

With Dinny Allen and Cleary purring, Cork led 1-5 to 0-4 after 25 minutes. Jack O’Shea struck for a Kerry goal before the break to level the score, 1-5 apiece.

‘We gave away a couple of soft scores in that first half too, we should have been ahead,’ Cleary laments.

‘There was a small crowd there but the covered stand was full and we got a fierce rousing reception at the break.

‘At half time, Joe and Eamonn were positive as always and told us there were only 35 minutes left, that people thought it would be over at half time but it wasn’t.’

Cork started the second half well and Tadhgie Murphy grabbed the first of his two goals. Kerry, though uncomfortable, worked their way back into the game, again, helped by Jack O’Shea’s penalty. It was 2-8 apiece after 55 minutes.

Kerry sub Sean Walsh then scored what looked like the decisive goal. Mikey Sheehy followed up with a point to open a four-point gap and time was running out for the Rebels. Cleary and Tadhgie Murphy pointed for Cork to make it a two-point match, as the game roared into injury-time. But there was one more twist. 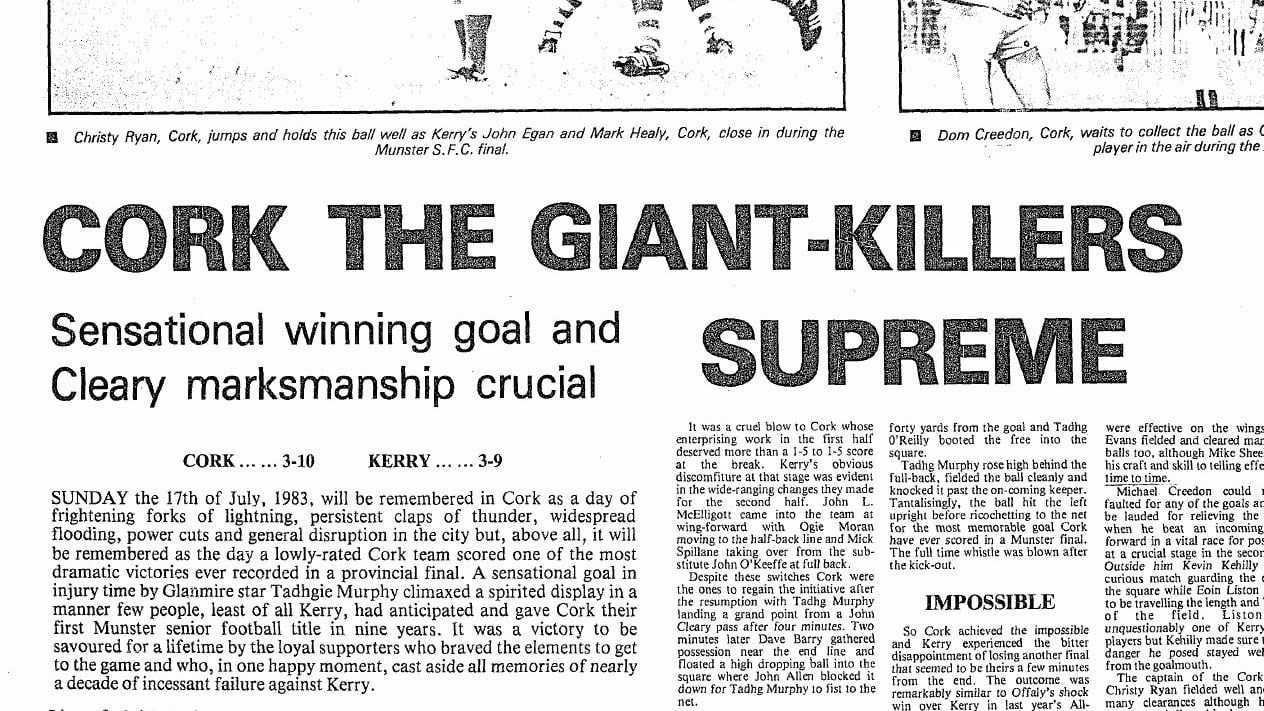 ‘When there is only two points in it, all you need is one bit of luck, one score, one shot to go your way,’ John Cleary says.

In Cork’s last attack, Dinny Allen was fouled – and the rest is history.

‘As Dinny has said himself he picked the ball straight off the ground before the foul so we’d a bit of luck there,’ Cleary recalls.

‘He was standing over the ball and so was I, and then Tadhg O’Reilly, who had caught the kick out, came from nowhere and kicked it straight in.

‘Tadhg Murphy caught a great ball, turned and fired it home. It was unbelievable, we couldn’t believe that we had beaten Kerry, particularly for the guys who had been there all the years and who’d suffered against that Kerry team.

‘You had the likes of Dinny Allen, Christy Ryan, Dominic Creedon, they were there for a number of years, at a time when Cork teams had taken some bad beatings.’

Cork won 3-10 to 3-9. Murphy’s goal is now the stuff of lore – the goal that ended Kerry’s dominance in Munster and shattered their nine-in-a-row bid.

‘It was like the Seamus Darby goal in one respect,’ says Cleary.

‘The big sense of achievement was to beat that great Kerry team. Maybe they took Cork a small bit for granted in 1983, they came back and won the next three Munster titles so it could have been 12 in a row only for that.’

‘We should have beaten Dublin in the first game. When it came back to Cork, it was the first time all year that there was a bit of pressure on us, we had been underdogs in every game before that.’

Cleary went on to achieve great things with Cork and Castlehaven, first as a footballer, and then in management, and up there in his own highlights reel is the 1983 Munster final.