THREE years after losing a final against Charleville by a point, Courcey Rovers went one better in the Co-op Superstores county premier intermediate hurling championship when accounting for Castlelyons in a thriller at Páirc Uí Chaoimh last Saturday.

Their victory bridged a ten-year gap, and, no doubt, it tasted all the sweeter for the reason it didn’t appear to be on the cards early in the second half.

Trailing by 1-13 to 0-8 with 32 minutes gone, the Carrigdhoun side displayed admirable resilience to bag the next four points, but their prospects continued to look bleak until a goal by substitute Olan Crowley cut the deficit to two in the 48th minute.

They never really looked back from there, piling on the punishment to go 1-19 to 1-16 ahead before Castlelyons responded with a late brace of points to ensure a nail-biting finale.

Afterwards Courceys selector Timmy Lordan hailed the players for the manner in which they battled gamely throughout, adding he expected nothing less from them on the day.

‘There’s great self-belief in this team, which is something our coach Sean Guiheen has instilled in them this year, so we always backed them to stick to the task,’ Lordan explained.

‘Having said that, it didn’t look good when we were eight points behind, and we probably needed a goal to be in with a chance of pulling the game out of the fire,’ he admitted.

‘Once we got it, the lads just seemed to throw off the shackles and play exceptionally well. 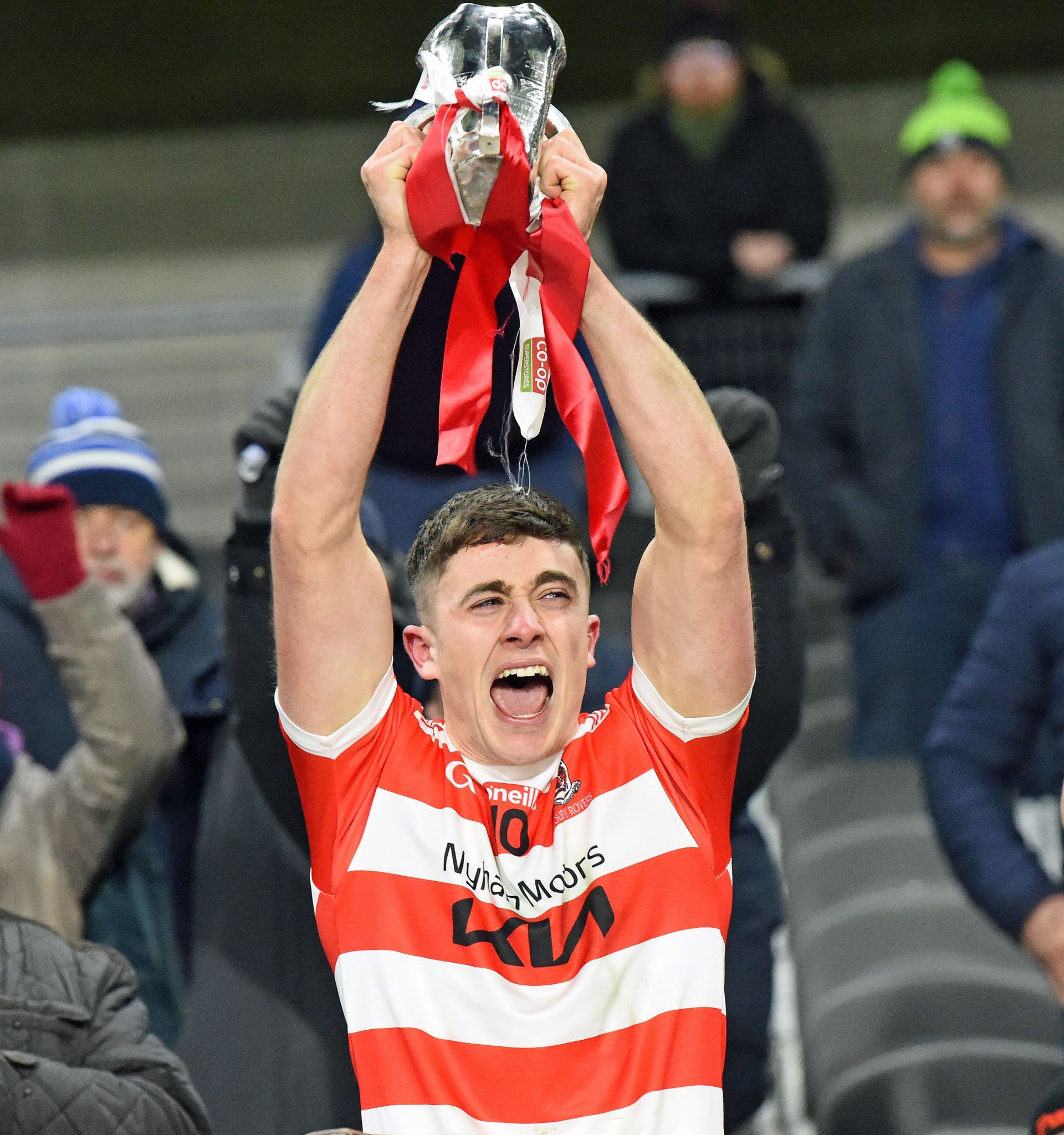 Lordan was a member of the Courceys team that previously lifted the title in 2011 – he won a county junior medal as well in 2001 – and he says he found it much easier to be involved as a player.

‘It’s a lot more nerve-racking on the line, but I suppose it’s equally satisfying when you win the title,’ stated the former key defender, who feels Courceys will have no difficulty holding their own in a higher grade next season.

‘I don’t think it’s a massive jump, to be honest, so I’m convinced we’ll give a good account of ourselves at senior A level.’

Although Courceys hit the ground running, with ace free-taker Richard Sweetnam posting a brace of scores at either side of a Jerry O’Neill point from play, they were 0-5 to 0-4 in arrears after Castlelyons’ wing-back Leon Doocey found the target in the 19th minute.

While O’Neill equalised four minutes later, the resultant puck-out broke kindly for Cork senior Niall O’Leary, who made the most of the gilt-edged opportunity to give the Imokilly side a lead they stretched to six points, 1-11 to 0-8, before the interval.

The scoring sequence that yielded points from Courceys’ Richard Sweetnam (2), Sean Twomey and Jerry O’Neill during the third quarter didn’t appear to be enough to knock Castlelyons off course after impressive midfielder Eoin Maye ended the East-Cork men’s 12-minute barren-spell to leave them 1-14 to 0-12 to the good.

They were still five points up, 1-16 to 0-14, when Sean Twomey set Olan Crowley up for the goal that transformed Courceys and the game. Twomey, O’Neill and Sweetnam, who converted a raft of frees with radar-like precision, sparkled up front in the second half, Martin Collins, ably supported by Liam Collins, prominent at midfield, while Fergus Lordan excelled at the heart of a defence in which Brian Collins and Shane McCarthy were others to shine.

It’s fair to say everyone, including the substitutes introduced, put a shoulder to the wheel at some stage, and the visibly stunned losers had no answers to the power-packed play produced by Courceys when the crunch came.

The result means Castlelyons are forced to endure a traumatic second successive final defeat, having beaten Courceys by six points at the semi-final stage last year before going under to Blarney in the decider.