Ilen Rovers' Peter O'Driscoll is closely marked by Clonakilty's Cian O'Donovan during the Cork PSFC round one game at Rosscarbery.

The West Cork side came out the wrong end of a 3-10 to 0-11 loss to Carbery rivals Clonakilty in their championship opener a fortnight ago. On the same weekend, the Barrs ran out 2-15 to 1-17 winners over Ballincollig.

Rovers manager Jason Whooley is well aware his team requires one victory from their final two group matches if a second consecutive relegation play-off is to be avoided.

Few, if anyone, outside of Ilen’s dressing room expects the West Cork side to defeat serious title contenders St Finbarr’s in Ballinascarthy on Saturday (4pm). So, is the pressure off Rovers heading into this weekend’s second round match?

‘Anyone playing the Barrs or any other Premier senior contender would go in as underdogs,’ Whooley says.

‘The Barrs played very well in their win over Ballincollig even though it was close enough in the end. At one stage, the Barrs were 13 points ahead. They have a very strong backroom team with the likes of Paul O’Keefe and Eric Barrett in there this year.

‘They have had good underage success recently, are a formidable force at senior and always have been in Cork football. A small club like ourselves going up against them will always be underdogs. That’s not the worst thing in the world though.’

In terms of injuries, Rovers are sweating on the availability of two of their most influential players ahead of Saturday’s clash.

‘Our captain Alan Holland got injured in the warm up before the Clonakilty match the last day,’ Whooley says.

‘We also lost our full-back Paddy Minihane after 17 minutes in that same game. Right now, those two players remain big injury doubts ahead of facing the Barrs.’

Whooley took plenty of positives from his side’s gutsy display despite an eight-point loss to Clonakilty. True, Rovers will need to produce a much-improved performance against the Barrs but there is enough raw material within Ilen’s set-up to trouble the city men. 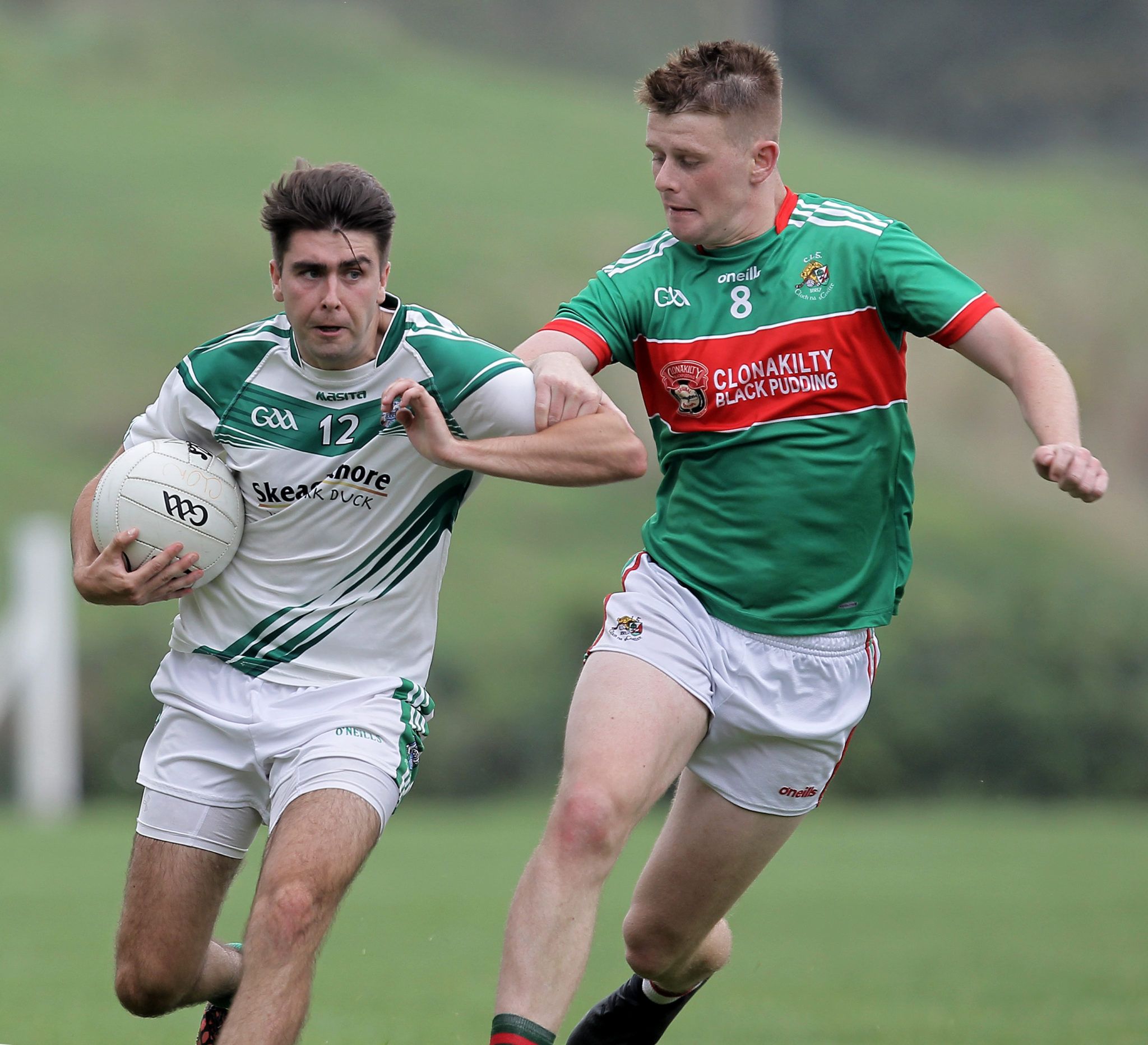 Ilen Rovers' Sean O'Donovan tries to shake off the challenge of Clonakilty's Joe Grimes during their Cork PSFC clash.

‘We kept playing right up until the end against Clonakilty and bounced back each time we conceded a goal,’ the Ilen Rovers manager says.

‘There is never a good time to concede goals but we came back and rattled off a couple of points immediately after which is encouraging. It is that old cliché that says goals win games. Clonakilty got three of them and we didn’t score any. That made it too much of a mountain to climb for us on the particular day.

‘As I said, there were positives from that game but scoring only one point from six attempts immediately after half time hurt us.’

Ilen can be considered a team in transition with plenty of the West Cork club’s minor and U20 graduates still finding their feet at premier senior level. Last year’s relegation play-off victory over Bishopstown was a welcome boost for a side that is not short of attacking weaponry.

Sean O’Donovan, Stephen Leonard and the experienced Dan Mac Eoin, as well as Peter O’Driscoll who scored three points against Clon, are capable of troubling any defence in the top tier of club football in Cork. Staring this weekend, Rovers need to supply their forwards with enough quality possession to ensure their premier senior status is retained.

‘As a group, we are probably lacking a small bit of championship experience,’ Whooley notes.

‘We are also lacking a bit of belief that comes from winning championship games. Ultimately, we have very good footballers within our squad. They are all hugely committed and just need to bring it up another notch in terms of their performance and belief.

‘All that will come, in time, from winning games and that’s something we haven’t done enough of in recent years.’