A FACEBOOK alert on her phone grabbed Phil Healy’s attention as she waited at Doha Airport for her flight back to Ireland.

It was that limbo time between night and morning in Qatar on Saturday, August 7th. Not night, but still not morning either; that thin sliver that exists in between. And an eight-hour flight to Dublin was ahead as she journeyed home from the Olympics, her first, in Tokyo.

Phil’s plan was to land at Dublin Airport around 2pm, meet her family, travel down home to Knockaneady in Ballineen and then rest Ireland’s fastest feet. No fuss, just what she liked.

But that wasn’t the actual plan, as she discovered on a Facebook post she was tagged in.

‘Olympic finalist and hero Phil Healy will drive through the villages starting at the co-op in Enniskeane approximately 6pm. So let us give Phil a heroes' welcome by lining the streets, to show how proud we are for all she has achieved. Please bring flags, buntings in support of this wonderful athlete.’

Her home villages, Ballineen and Enniskeane, had organised a homecoming for their Olympic hero. It was the first Phil had heard of it!

She doesn’t seek out the spotlight. That’s just not her style. It’s not her scene either, preferring normality to fanfare.

Phil screenshotted the message and popped it straight into her family’s WhatsApp group. Ballineen time is three hours behind Doha. All in the Healy household were sleeping, stocking up for their busy Saturday – but then phones noised all over the house. Beep. Beep. Beep.

‘I sent so many messages, asking what is this, that I woke them up!’ Phil smiles.

She might be Ireland’s fastest woman to the masses, the trailblazer and the queen of Irish women’s sprinting, but to her parish, she’s Phil.

That Saturday evening – a few hours later than scheduled after hay bales strewn across the M7 slowed their convoy down – the red carpet was rolled out. So too was a red Opel Astra convertible car driven by Annette Spillane – Phil’s former keyboard teacher – as the returning Olympian was paraded through Ballineen and Enniskeane. It was the homecoming she didn’t look for but the one she richly deserved. 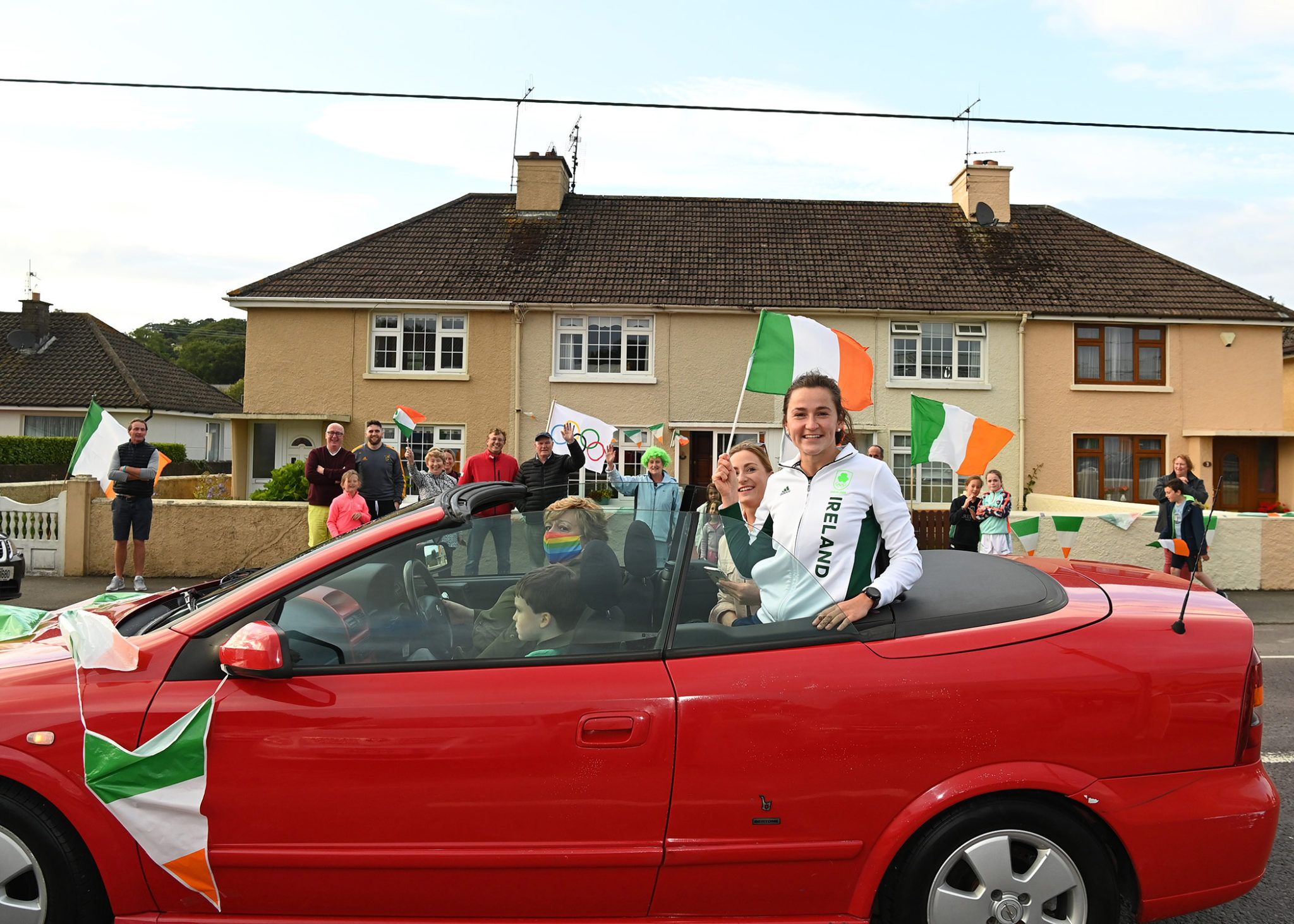 Olympic hero Phil Healy was paraded through Ballineen after landing home from the Tokyo Olympics.

Phil is an Olympian. That’s a title she will have forever. So too are the memories she made in Tokyo in early August. Under the shadow of Covid, the Games were different to its predecessors, especially off the track. She doesn’t have a previous Olympics to compare it to, but she’s competed at enough major international championships to appreciate the differences.

‘It was a great experience but obviously Covid changed everything. Not mixing with anyone. Even having to keep your apartment really tight and not mixing apartments, not to mind sports,’ she explains, but once she got to the Olympic Stadium it was down to business.

Her Tokyo schedule was enough to make you sweat, even without the humidity. First up the relay semi-final on Friday, July 30th. Qualify, and the Olympic final was the following night. Sunday was a rest day. Then the heats of the women’s 200m were on Monday, August 2nd, followed by the heats of the 400m on Tuesday. Phil knew it would be intense – and it was.

The reward of the relay team – including Cillin Greene, Sophie Becker and Chris O’Donnell – running a national record of 3:12.18 in their semi-final was a place in an Olympic final; that’s the stuff of dreams. But, as events transpired, it also hurt Phil’s individual chances days later. In the Olympic final, Phil & Co finished eighth on the Saturday night in Tokyo. Physically and emotionally, the relay took its toll – and as she turn into her individual events she didn’t hit the heights her form coming into the Games suggested she could.

‘I was really disappointed after the 200m because I knew I was in PB shape for the 200 and the 400 based on all my times in the holding camp and prior to when we left for Tokyo,’ Phil says, reflecting on her fifth-place finished in her 200m heat on the Monday. Her time of 23.21 was a season's best, but just not good enough for a semi-final spot. She missed out on a non-automatic qualifying place by just 0.05. Incredibly slim margins. That hit her hard. She was in tears afterwards as she collected her gear. 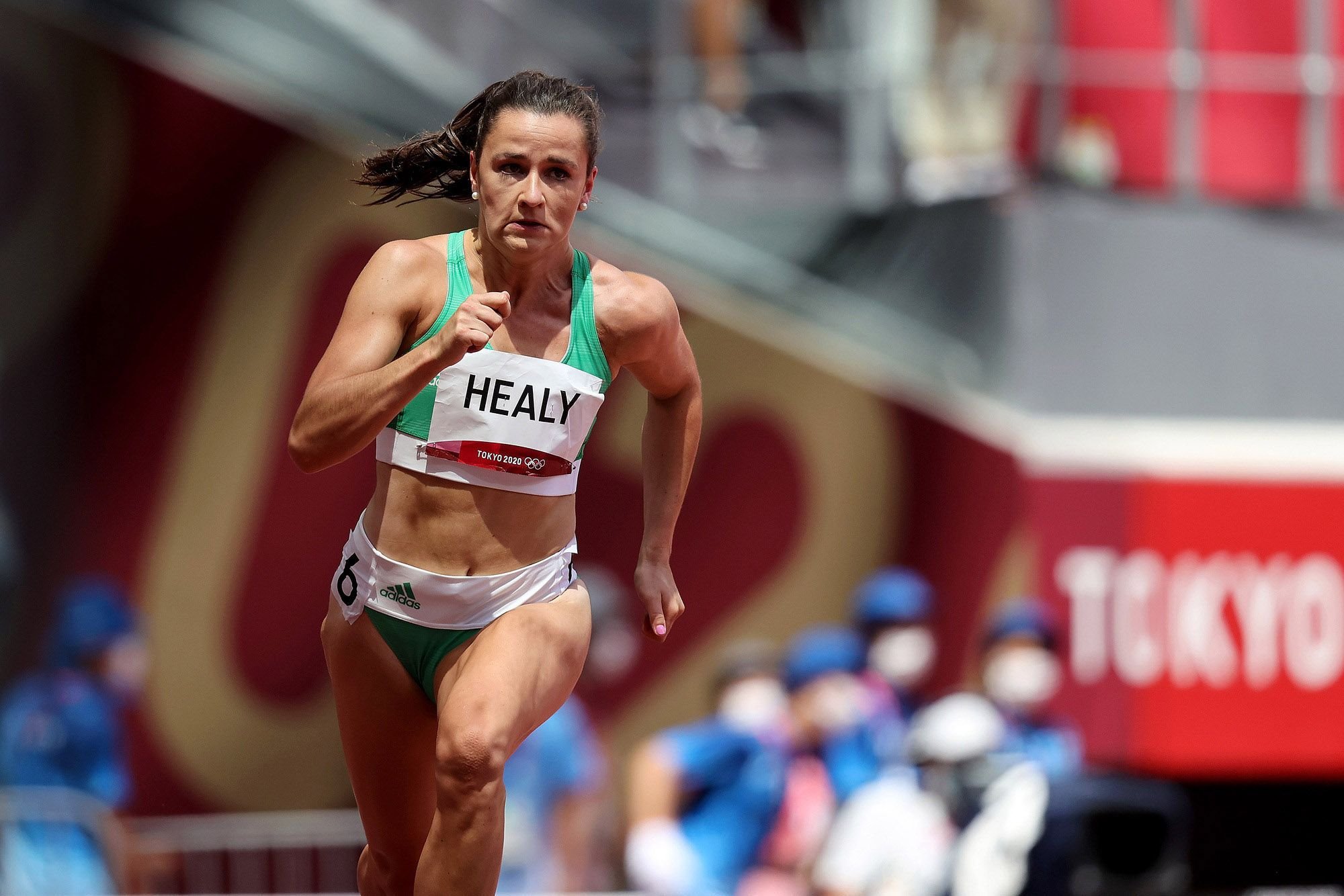 Phil Healy in action in the women's 400m heats at the Tokyo Olympics.

‘Fatigue did have a factor there so I had to turn my focus to the 400,’ Phil explains, ‘and we didn’t make the decision to do the 400 until about 15 minutes before we went into the call room – because it may not have been the best decision to go out there and have a worse performance than the previous day and the 200.

‘Looking at the 200 I was one spot off a semi-final so it wasn’t a disastrous performance, but knowing what I could have done but didn’t do, that’s what made me a little bitter almost – but I channelled that into the 400.’ Those who know Phil know she’s a warrior. There’s a steel to her. She’s resilient – and the watching nation saw that in her women’s 400m heat, just 24 hours after her 200m disappointment.  She broke 52 seconds, again, with 51.98, her second fastest 400m outdoor time ever, and just missed out on a semi-final spot by 0.07 seconds. Again, fractions. But she felt redeemed. And her roller-coaster Games – highs and lows crammed into five Tokyo days – finished on a positive note.

‘I made peace with myself in the 400. I definitely surprised myself with what I did and what time I did, but if the 400 didn’t go well – and, yes, we made an Olympic final – but I wouldn’t have seen the Games as much as a success as it was,’ she says. But these Olympics were a success.

The Bandon AC superstar made history running in three different events at the same Games and also running in an Olympic final. She has put Irish women’s sprinting on the world map. And put Ballineen, too. She’s the ideal ambassador. At the homecoming, her family, friends and neighbours said thanks.

With the Olympic box ticked, Phil has moved on, fast. 2022 is crammed. She has the World Indoor Championships in Belgrade in mid-March, then the outdoor World Championships in Oregon in July followed by the outdoor European Championships in Munich in August. That’s a calendar to focus the mind, and she got back to work in her winter training block – under the guidance of coach Shane McCormack – as the foundation is laid for another big year. Getting back into the trenches for the grunt work of winter training, and getting motivated to go again, wasn’t an issue either.

‘I said to Shane one day that it doesn’t feel like we were at the Olympics. Maybe that’s because it didn’t have the normal spectacle of being at an Olympics. It was even less compared to a pure athletics major championship. There was no massive comedown, as such,’ she says.

‘Obviously your body has to recover, but it was just like a new season. I know they talk about post-Olympic blues but maybe it helped in a way that we didn’t have as much of a comedown as we would have if it was a different Olympic experience.’

But Phil, who turned 27 in November, will take learnings from Tokyo. She doesn’t need to compete in three events at a major championships again. She has already ticked that box. 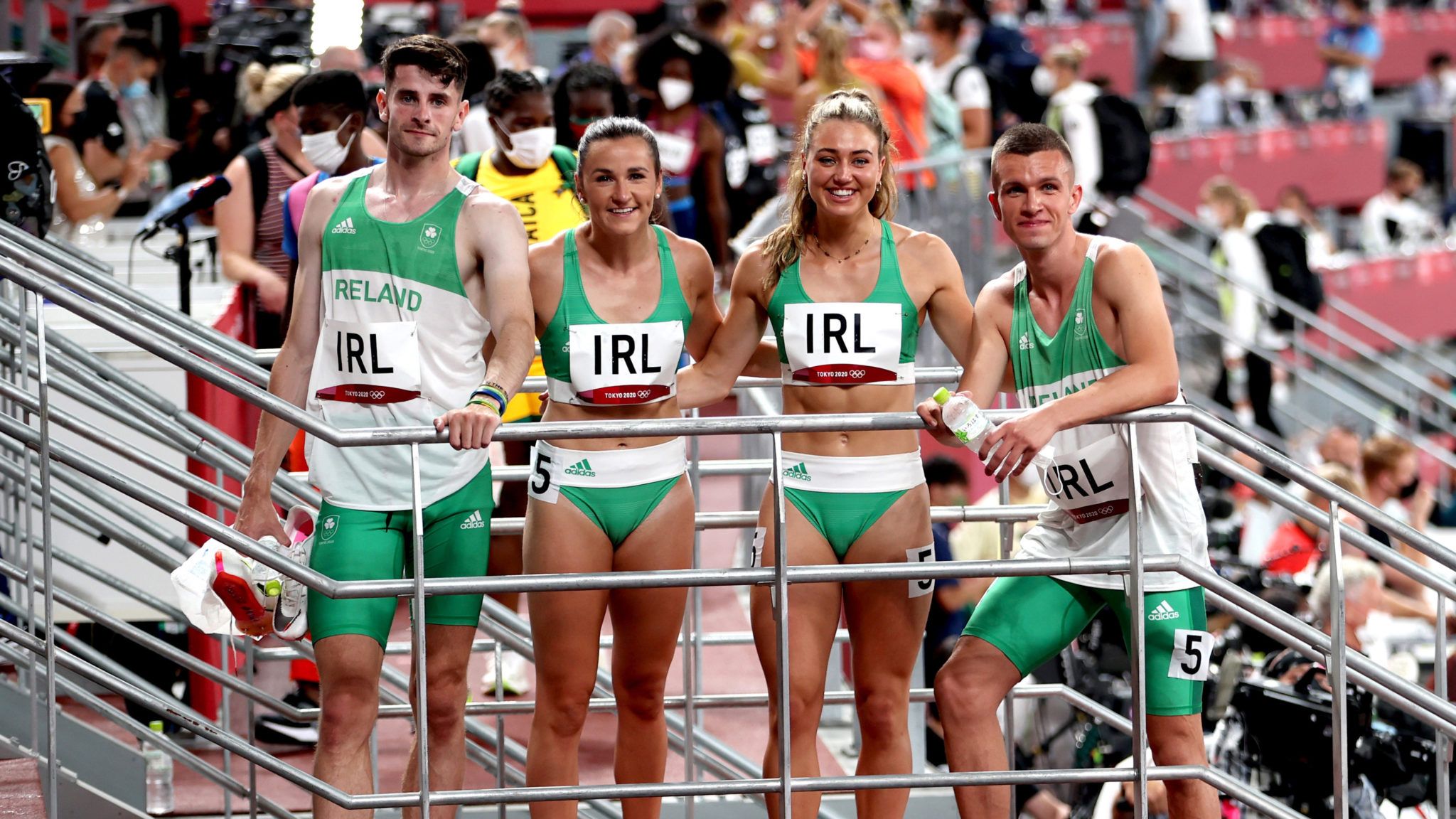 ‘We have the World Indoors and there is only the 400 – so the decision is made for me there,’ explains Phil, who finished a brilliant fourth in the women’s 400m final at the 2021 European Indoors.

‘For the World Championships, the mixed 4x400m relay is there, but it’s not at the Europeans. Again, at the Worlds (and like in Tokyo) it’s at the start of the programme. The heat and the final are on the first day and that’s a lot tougher than it was in Tokyo when there were 24 hours apart. We will have to make a decision as the year plays out, whether I will be part of that squad or not? Will I do the 200? Or will I do the 400? There are a lot of decisions to be made.’

‘When it comes to the Europeans, it will be one event (200m or 400m) over the other. We will have the all-female 4x400m relay too, and that is at the end of the programme so it depends on what I qualify in.

‘It will play out itself as the year goes on, we haven’t made any decisions yet. There could be a year where you don’t make it individually and the relay could be your best bet of getting to those championships. We just have to see.’

And then in the distance are the 2024 Paris Olympics. The shorter three-year cycle means the next Games will come into focus a lot quicker. Paris is in the back of her mind. It’s one of many targets. And – fingers crossed – it will be another chance for the Ballineen and Enniskeane Tidy Towns Association to show that it can throw a homecoming to rival the best of them. At least next time Phil will know what to expect.