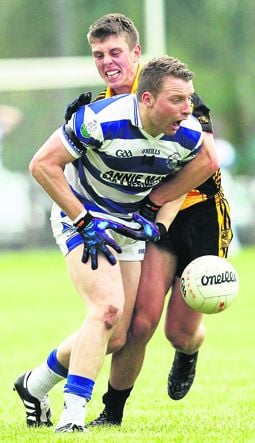 Major loss: Castlehaven’s Brian Hurley was red carded in the first round win against Clyda Rovers.

CASTLEHAVEN go into battle without their main scoring threat this Saturday evening.

Sixteen long weeks after beating Clyda Rovers in the first round of the senior football championship, Castlehaven, champions in 2012 and 2013, are back in action when they play St Finbarr’s in the fourth round in Clonakilty on Saturday evening, but they will do so without the suspended Brian Hurley, who was red carded in that first-round win (2-12 to 0-9).

‘Brian’s sending off was a disaster. No team can afford the loss of a player like him. He will be a huge loss to us on Saturday,’ Haven manager Jim Nolan admitted.

As 2013 champions, Castlehaven found themselves in the very same situation last season having beaten St Vincent’s in the first round but lost a fourth round replay to neighbours Carbery Rangers. It remains to be seen how they have coped with the long gap this season.

The Haven have filled in the 16 weeks with challenge games and a few Kelleher Shield league games. They sit on top of the league, having won six games from nine. One of the wins came against the Barr’s, by seven points, but that was way back in April and will count for little now.

Bar Brian Hurley and a doubt about James Davis, who is nursing a hamstring injury, Castlehaven will field a full-strength side for this game.

Nolan added: ‘Michael Hurley played his first full game in months with the juniors last week against Colum’s and did very well. He will be a big plus on Saturday if fit.’

The Haven will have all their regular stars in action and much will depend on the hunger factor. After one of the longest innings in club senior football, Liam Collins has stepped down to junior this season and fronting reliable goalkeeper Anthony Seymour against Clyda were John O’Regan and the experienced David Limrick and Tomás O’Leary.

The strong half-back line was made up of Damian Cahalane, Roland Whelton and Chris Hayes, while the strong Sean Dineen and the mercurial Mark Collins form a good midfield duo.

Stephen Hurley will probably be joined by his young brother Michael for the first time this season but third brother, Brian, is a huge loss. Other forwards like Seanie Cahalane, Shane Nolan, Stephen Collins and James Davis, if fit, will have to produce the scores on this occasion.

Daniel Hegarty has been in great form with the juniors and may be due a step-up to senior.

Michael Shields is still their spiritual leader and they will look also to Glen O’Connor, Roy Leahy, Cian Madden (their accurate free-taker), Colin Lyons and Eoin Dennehy for inspiration. Cork player Ian Maguire, out with a back injury for most of the season, made a comeback with the juniors last week but had to go off, due to a different injury, after only 20 minutes. He must be a doubtful starter.

‘We are certainly not taking anything for granted with the Barr’s. Their present team is young but starting to peak, and they are always a big, strong side. We will have our hands full to get through this one,’ Nolan said.

Prediction: Were Brian Hurley in action for the Haven, we would have no hesitation in tipping the West Cork side to win this one and to advance to a quarter-final against Ballincollig. However, no team could suffer the loss of such a high-scoring forward without suffering, and the Haven will struggle for scores.

On the plus side, Michael Hurley was in great form for the juniors last weekend. The Barr’s will see an opportunity and will give this one a right good shot but their record in West Cork is none too healthy and the Haven should shade it.