IT was heartbreak for gallant Urhan in Cloughduv when they fell just one point short of hot favourites Boherbue in the semi-final of the county junior A football championship.

The Beara men led only once in the game, immediately after the first water break, but fought back to level the game on four occasions when it seemed the Duhallow men might live up to their favourites’ tag.

In the end, it took a point from ace forward Jerry O’Connor in the 61st minute to put the winners through to a final meeting with Ballinhassig.

Over the hour, Urhan showed tremendous commitment and endeavour. Even when they fell a goal behind in the first minute of the second half, Gerry O’Sullivan setting up O’Connor for the only green flag of the game, they immediately responded by kicking the next three points to level the game again. In the end, heart wasn’t quite enough to take Urhan through as Boherbue called on all their experience in the dying minutes to pull off the win. The loss of the outstanding Joe O’Shea, a former All-Ireland winning Cork minor footballer, to injury in the closing stages was a massive blow to Urhan as the stronger Duhallow champions struck for home.

‘We used every bit of luck we had to get over the line there,’ admitted a relieved Boherbue manager Conor O’Riordan.

‘They really put it up to us, it was a ferocious battle and it took a few great scores by us to just get over the line. Urhan were scoring a lot easier than us in the first half, they were working fierce hard and were breaking us down. They kept turning us over and we couldn’t get a rhythm going.’ 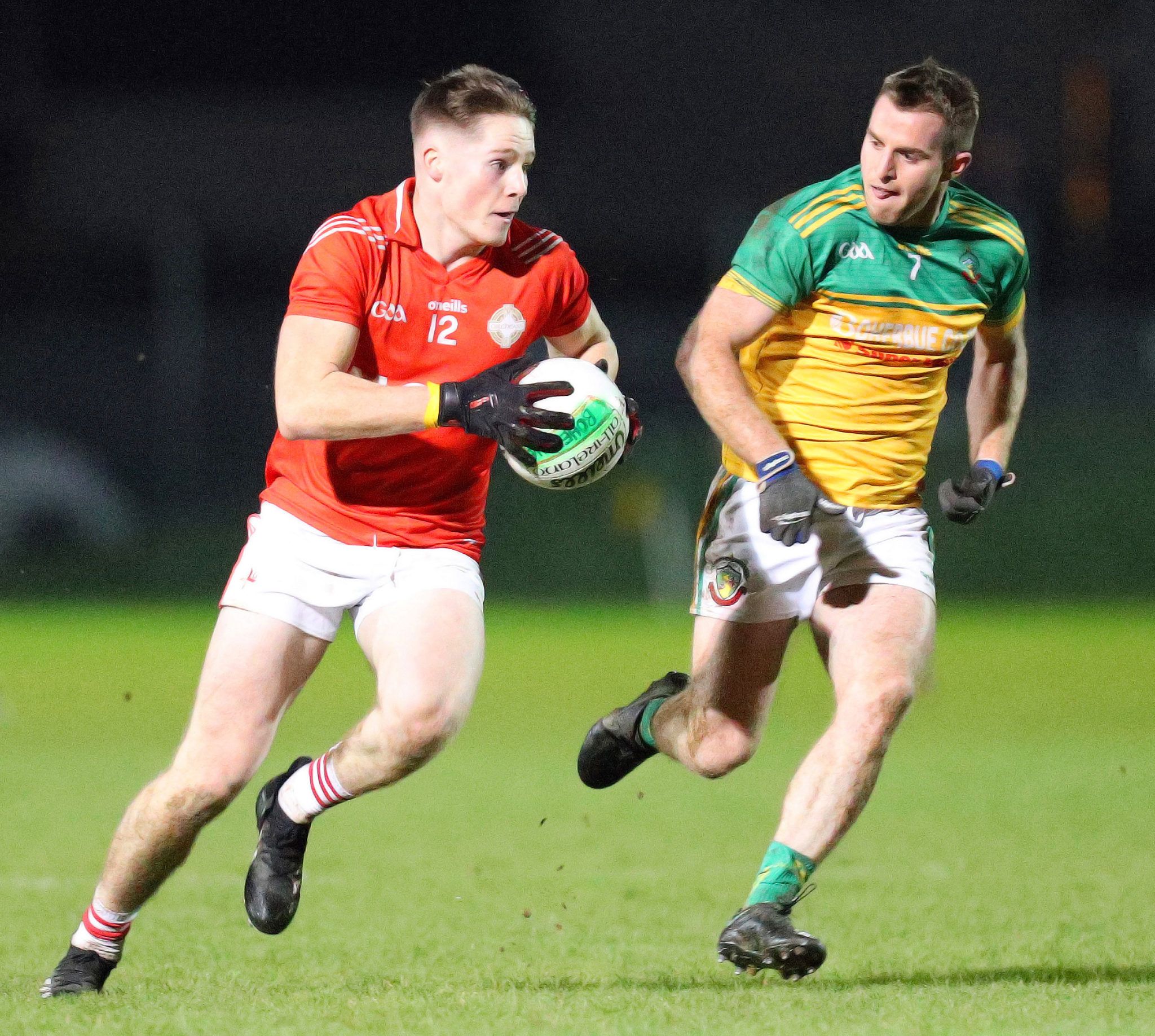 Urhan looked the better side in the opening quarter as they dominated possession but some tigerish defending by the Boherbue backs kept them at bay. The sides swapped points twice with John Corkery and Denis McCarthy (free) hitting Boherbue points and Conor Lowney (free) and the impressive Philip O’Shea replying for Urhan. It was 0-2 each at the water break.

Boherbue got on top in the second quarter, following a point from Philip O’Shea that had the Beara men in front for the only time in the game. Points from Liam Moynihan, the lively Denis McCarthy and Ross O’Connor had Boherbue two in front and threatening a takeover. Courageously, Urhan lifted their game before half time and points from Ciarán O’Sullivan and Conor Lowney (free) had the sides level at the halfway stage, 0-5 each. Both sides had missed great goal chances at that stage, McCarthy for Boherbue and Lowney for Urhan.

When Jerry O’Connor rattled in a goal within a minute of the restart, we waited for the floodgates to open but once more Urhan rallied with Joe O’Shea, Alan Elphick and Mícheál Shea prominent in defence, Conor O’Sullivan working hard at midfield and Philp O’Shea, Ciarán O’Sullivan and Conor Lowney causing problems up front.

Points from impressive sub Conchúr Harrington and the rampaging Joe O’Shea, two superb efforts, had the game all square again in a quarter that had the excitement in the large crowd at a fever pitch. Boherbue were now looking the stronger side. Points from Denis McCarthy (free), Alan O’Connor and Jerry O’Connor, with a single reply from Philip Shea, had the Duhallow men two points to the good at the second water break. Still the gallant Urhan lads refused to give up as the legs began to give out. Amazingly, points from Lowney (45) and Conchúr Harrington had them level for the fourth time in the 54th minute. It was real hell for leather football then but Urhan were hit hard by the loss of Joe O’Shea to injury. 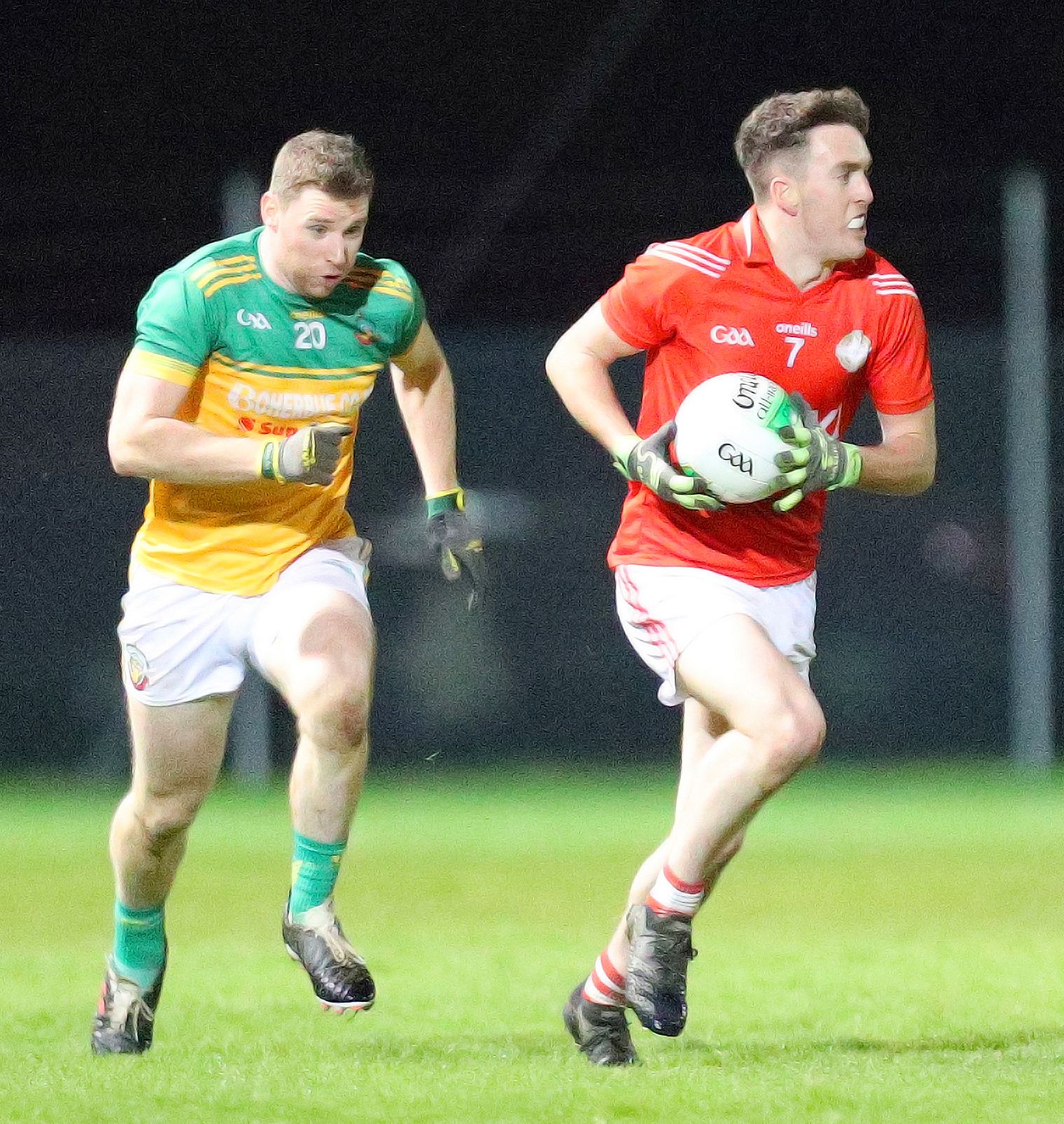 The decisive score came in the 61st minute from a Jerry O’Connor free and the winners played possession football subsequently to deny the Urhan men another chance of an equaliser.

‘Very disappointing to be honest,’ said a shattered Urhan mentor Martin McCarthy. ‘It was a fantastic effort by the lads, we just couldn’t have asked for any more. At the end of the day we lost the game, we came here to win, we lost. No excuses, we came up a bit short tonight. We’ll take our beating and we’ll take it on from here.’