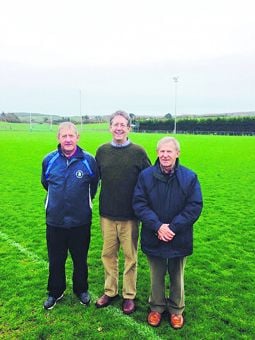 THERE was a lotto luck involved in a sequence of events that resulted in the great grandson of a Castlehaven emigrant visiting the area in April to reconnect with family members.

John Mara, from Boston in the USA, is the great grandson of Mary Hegarty, who left Bluid for Boston in 1892, and 123 years later he tracked down his cousins in Castlehaven – TJ and Donie Hegarty – thanks to Castlehaven GAA Club.

Attempting to trace his Irish roots back to West Cork, John Mara searched online for references of ‘Hegartys in Bluid’, where he spotted that TJ Hegarty had won €100 in a Castlehaven GAA lotto draw.

Mara then contacted club secretary Bernie Hurley, whom he asked to forward an email to TJ Hegarty where he explained his story and their common ancestry – that helped ‘closed the loop’ opened by Mary Hegarty’s emigration in 1892.

Last month, Mara set foot on the same Castlehaven soil as his great grandmother, spent time with his cousins, watched the club’s Kelleher Shield match against local rivals O’Donovan Rossa, and much more. It was an unforgettable journey, as he explains.

‘While I have enjoyed many interesting trips, the trip back to Bluid/Castlehaven is by far the most meaningful. I genuinely feel like a different person, having seen my great grandmother’s farm, church, school, and points of departure,’ he said.

‘The trip to Castlehaven creates a new context for our family history – where we started, ended up, progressed, and why. Of course, getting to know all of the present day Hegartys, including GAA’s Donie Hegarty, was the highlight.

‘They were all genuinely interested in learning about the Hegarty diaspora to Boston, sharing the family history, and it was gratifying in return that I was able to shed even more light on it for them.’

The story of Mary Hegarty’s emigration is an interesting one. She left Irish shores in 1892, along with two siblings, when she was only 21 years old, as she went in search of a new life and new opportunities. John Mara takes up the story.

‘She arrived in Charlestown (Boston) harbour and, along with other Irish emigrants, lived and worked her entire life within walking distance of the dock where she landed,’ he said.

‘In 1897 she married my great-grandfather, John Mara, from county Waterford. The Irish faced discrimination in Boston (as in New York City), with limited opportunity – she would’ve seen many “Irish need not apply” signs. Mary worked as a houseworker, and her husband as a teamster.

‘Mary lived in crowded tenements in Boston at a time when tuberculosis was common in such surroundings. She lost two of five children and her husband to TB by 1910, and then she died of TB as well in 1915 at age 45, leaving a son (my grandfather) orphaned at age 12.’

That orphan – John Mara’s grandfather – became a ward of the state, who paid a farm to take him on as a labourer.

‘Through a strong work ethic and positive attitude, he ultimately lived a good life as a truck driver. He provided a strong upbringing in a middle class community for Philip Mara, my father, who played American football in his youth, fought in the Korean War and received a medal, drove a truck, and later worked as an insurance agent. His four children, including me, were all able to attend college, with good jobs, families and prosperous lives,’ John Mara explained.

When John was a kid his grandfather told him that his great grandmother was ‘Mary Hegarty from County Cork’, and that set the wheels in motion that once day would see him retrace her footsteps to Castlehaven – with a GAA lotto win playing its part as well.