Still in contention: Emma Fitzpatrick qualified for the women's senior semi-finals after her win at Derrinasafa last week. 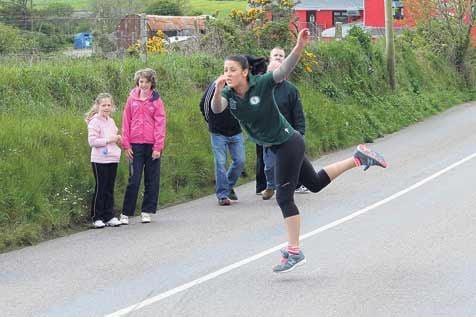 Still in contention: Emma Fitzpatrick qualified for the women’s senior semi-finals after her win at Derrinasafa last week.

ON a weekend bereft of senior or intermediate championship action the corresponding ladies’ competitions provided well-contested encounters around the county as contenders vie for qualifying places.

The Ross girl, an unlucky runner-up to Carmel Ryan in last year’s dramatic county final at Lyre, needed the point with one win from her previous two outings in Pool A, but she struggled in the opening phase as Murphy dominated proceedings, particularly from ‘Daly’s gate’ onwards.

A bowl of odds separated them in Murphy’s favour at ‘Nattie’s’ and that margin was extended as the Ballinagree girl continued to hold sway around ‘Cotter’s cross’.

Fitzpatrick lined a magnificent effort up from ‘darkwood’ and followed with another to ‘Walsh’s lane’. The margin narrowed and a thrilling contest unfolded as Murphy doggedly sought to maintain her lead.

There was nothing she could do with two further excellent efforts by the Carbery girl that brought her ahead eventually at ‘O’Neill’s cross’.

That was the turning point and Fitzpatrick took the verdict and in doing so booked a place in the semi-final.

Denise Murphy has another chance as she completes the group-stage scores in a contest with Catriona Kidney at Templemichael. This is a winner-take-all score as Claire O’Sullivan was awarded the winning point from her non-played fixture with the Carrigtwohill girl, which was down for decision at Jagoe’s Mills last week.

Defending champion Carmel Ryan and Louise Collins have qualified from Pool B.

Ciara went a shot up back of the ‘Bell Inn’ but Mairead levelled with two outstanding efforts to ‘Geoff’s lane’. Shot for shot it went before the Ballyclough girl took the point in the final throw.

In the same grouping, Emer O’Donovan won by a shot from Elaine Collins at Ballinacarriga after a good contest on Saturday.

There is plenty to play for in this grouping. Ciara Buckley and Emer O’Donovan lead the way closely followed by Emma Hickey and Mairead O’Driscoll.

Bernadette Murphy and Rose Twohig duelled in a Pool B contest at Macroom and produced bowling of a high standard. North Cork girl Twohig twice rallied after Murphy went a bowl up but could not quite force her way into the ascendancy.

Bernadette Murphy put in a solid finish and won by a big last shot. The Brinny girl stays strongly in contention in a group that has Aileen Murphy on top with Lisa Hegarty and Nicola O’Sullivan also in the running. The top two from each pool go forward to the semi-finals.