ADRIGOLE v GABRIEL RANGERS: What a game in late July for both clubs to kick off their Group A Intermediate A Football Championship campaign with, as Beara side Adrigole take on Carbery’s Gabriel Rangers. A winning start is important on a number of levels, and provides a platform ahead of the next two games against the top two seeds, Kilshannig and Ballydesmond. Given the games that lie in wait after, both Adrigole and Gabriels will target an opening-round win. Last season, both failed to get past the group stages as both finished third in their respective groups. Both teams also won their first games but came unstuck after. The clubs did meet in round one of the old Cork Intermediate FC in 2019, and Gabriels won, on their way to the county final.

BANDON v VALLEY ROVERS: This is a match we’re looking forward to. Bandon, relegated from Senior A hurling last season, up against a Valleys team, from neighbouring Innishannon, who lost last season’s Cork Premier Intermediate Hurling Championship semi-final to eventual champions Courcey Rovers. Given how Bandon slumped last season – losing all four SAHC games including the relegation play-off – Valleys will be keen to add to their woes. This is an important campaign for Bandon, the chance to point the ship in the right direction, and the right result in their opening Group B PIHC game against Valleys would set them up for the remaining games against Youghal and Inniscarra.

BANTRY BLUES v CASTLETOWNBERE: This is a derby with a difference, as Bantry Blues, one of the furthest west Carbery clubs in the division, lock horns with Castletownbere, the top Beara football team. Only 50 kilometres separate the two towns, but there’s no separating them in football now, as both campaign at Premier Intermediate grade and both are in Group B this season (joined by Aghada and Na Piarsaigh). St Mary’s David O’Donovan is the new manager of Bantry and the man tasked with reviving the fortunes of this fallen giant who was relegated from the SAFC ranks last season. It’s an important season for Bantry to reset and get back on track, and their second Group B game (in mid August) is against a Castletown team well used to the rigours of Premier Intermediate football. Castletown haven’t advanced from the group stage in the past two seasons, but a win against Bantry would be a massive boost and a huge scalp. 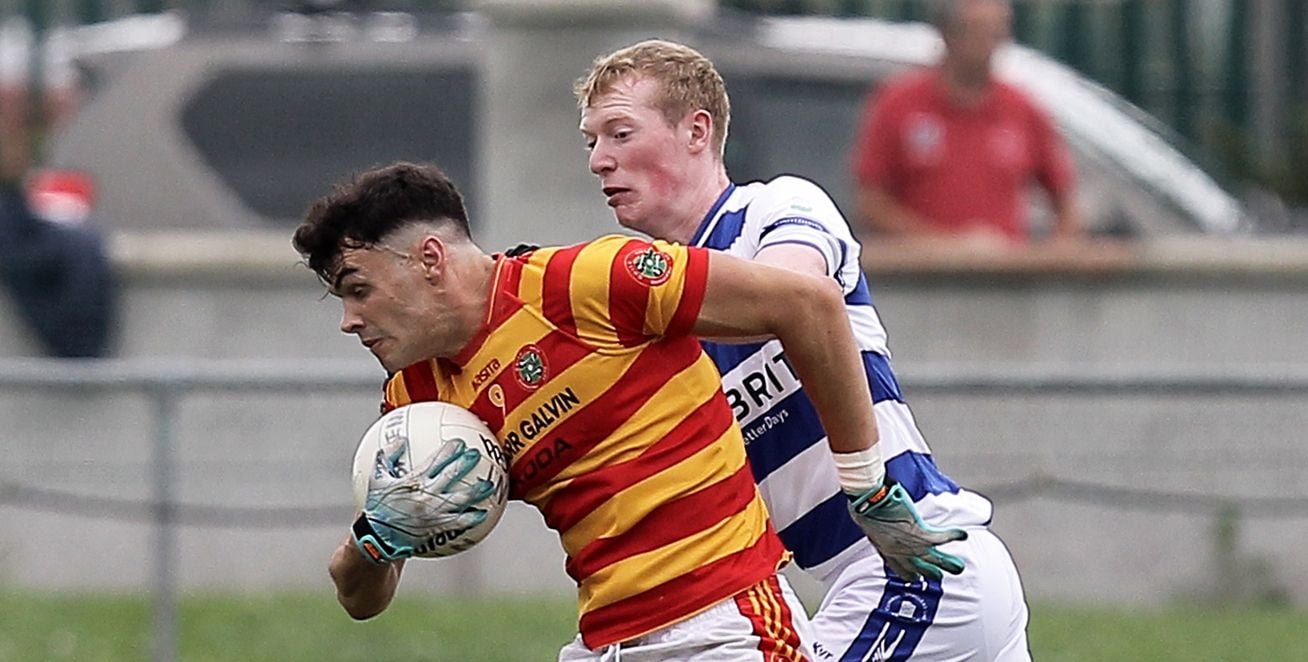 Newcestown's Sean O'Donovan is challenged by Castlehaven's Conor Cahalane during the 2020 Cork PSFC round two game.

CASTLEHAVEN V NEWCESTOWN: Two teams that know each other well, having battled it out in the Premier SFC group stages the past two seasons. Both times, Castlehaven won (1-12 to 0-9 in 2020, 2-12 to 1-10 in 2021), but they won’t underestimate a Newcestown team that was quarter-finalists two seasons ago. As a dual senior club, the schedule is unrelenting and that may be a factor when they play the Haven in their final Group C Premier SFC game in early September. By then, Newcestown will have played Nemo Rangers and then Clonakilty, another local derby, so both they and Castlehaven will know what’s on the line when they face off. Newcestown never lie down and they’re capable of beating any team. So while the attention in this stacked Group C is on Castlehaven, Nemo and Clon, that might suit Newcestown.

CLONAKILTY v CASTLEHAVEN: The ground in West Cork will shudder when these two heavyweights enter the arena to battle in their opening Premier SFC Group C game in late July. 2021 surprise packets Clon were the story of last year’s championship, though they eventually came up short in the county final, while Castlehaven have been West Cork’s top senior football team in recent years. Both will target a winning start in the Group of Death that also includes a hurting Nemo Rangers and a dogged Newcestown. Lose the opener here, and it’s a dangerous game of catch-up. This derby will also see the Castlehaven attack, spearheaded by the Hurley brothers, attempt to breach the mean Clon defence led by Thomas Clancy. It also pits two of the best football brains in West Cork against each other on the sideline – Clonakilty’s legendary Haulie O’Neill versus Haven’s astute James McCarthy. Bring it on.

DOHENYS v BANDON: Déjà vu in one sense as these two meet in the group stage of the Cork Senior A FC for the third season in a row, but the previous games haven’t disappointed. It was honours even with a draw in 2020 before Dohenys beat Bandon (and leapfrogged them in the table) in their final group game last season. The end result: Dohenys advanced to the knock-out stages while Bandon missed out. They will meet in their second Group B game this year, with Dohenys coming off the back of an opener against Béal Áthan Ghaorthaidh while Bandon will have played Kiskeam. Depending on opening-round results, this local derby is likely to have a huge say in their title bids. Both managers (Dohenys’ Declan O’Dwyer and Bandon’s Colm Aherne) know each other well, too, as they work in the same Garda unit.

KILBRITTAIN v BARRYROE: Two local rivals that know each other quite well and who have a history against one another, including three divisional finals in the 1980s. Barryroe won that series 2-1, but it’s Kilbrittain in the ascendancy these days. Last season, in the Lower Intermediate Hurling Championship, Jamie Wall’s Kilbrittain powered to the county final before losing to Lisgoold. Still, they’re a team to watch in this year’s rebranded Premier Junior. Barryroe, however, have struggled in the old LIHC grade these past two seasons – but the only point they have picked up in their six group games in 2020 and ’21 came against Kilbrittain (0-12 apiece in 2020). It’s that derby element when form, to a degree, is superseded by local bragging rights and pride of the parish. And now they meet again in their second game in Premier Junior Group A this summer. Milford and St Finbarr’s are in the same group. Important to note as well that the 2022 Premier Junior champions will represent Cork in the Munster club junior championship. 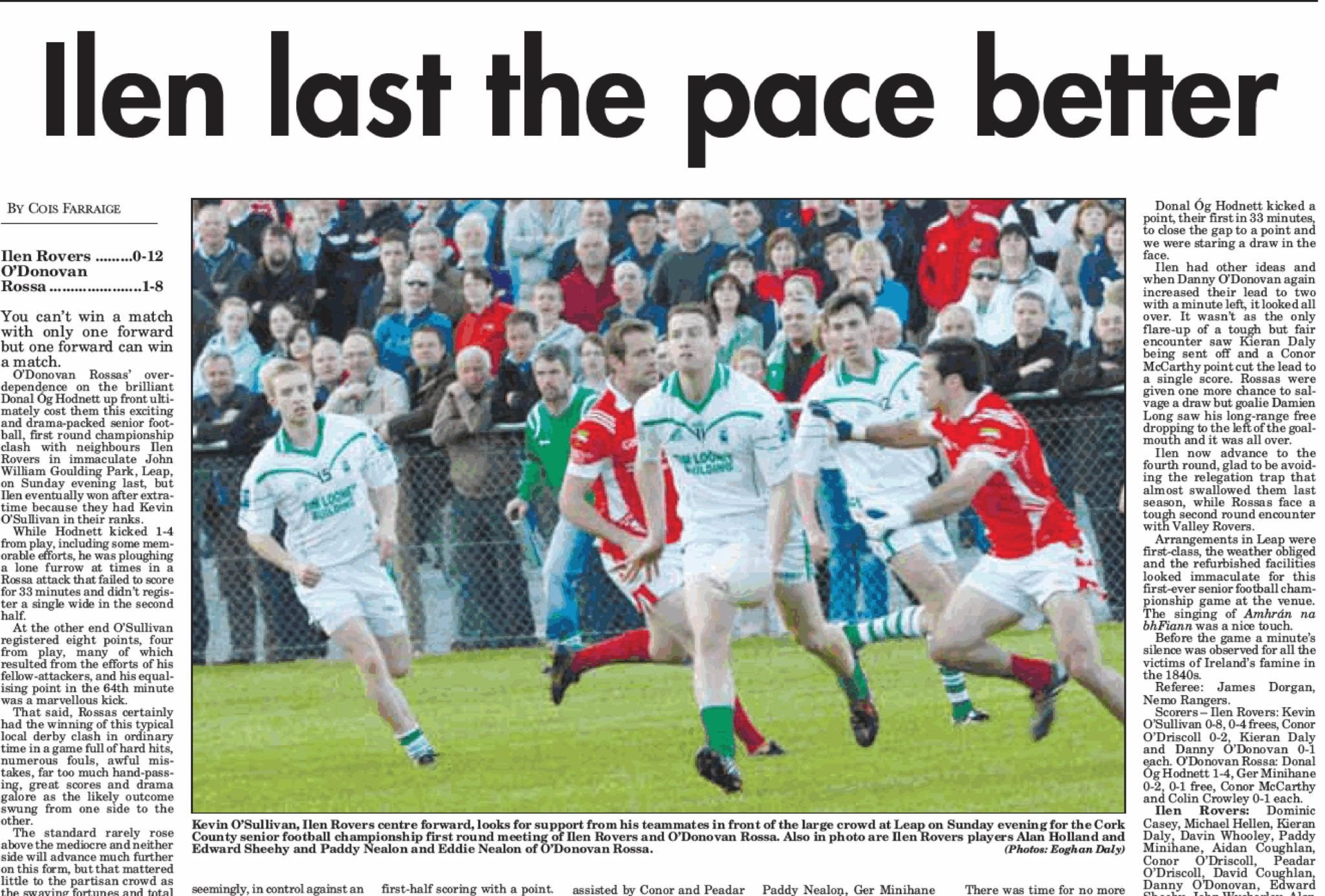 The match report in The Southern Star when Ilen Rovers beat O'Donovan Rossa in the 2010 Cork SFC.

O’DONOVAN ROSSA v ILEN ROVERS: The El Skibbico will pit two local neighbours against one another – and there will be more than two points in Group A of the 2022 Cork Senior A Football Championship up for grabs when these two collide. The bragging rights here will last through next winter. These teams last met in the Cork SFC back in 2010 when Ilen won 0-12 to 1-8 after extra time, Kevin O’Sullivan with 0-8 for the winners. It’s been a long wait for their next championship battle and both teams need a good SAFC campaign after disappointing 2021 seasons. Ilen were relegated from Premier Senior while Rossas, SAFC semi-finalists in 2020, didn’t even make it out of their group last year. They’ll meet in their second Group A match in mid August so it will already have a make-of-break edge, adding to the tension.