Celebration time for Belgooly after their victory in the Cork JBHC final at Páirc Uí Rinn. (Photo: George Hatchell)

IT was a case of the chickens coming home to roost in the recent Co-op Superstores county junior B hurling championship final at Páirc Uí Rinn, according to Randal Óg manager Ger Collins.

The Carbery team, chasing a double after winning the county junior B football title last month, remained well in the hunt until Barry Dwyer fired in Belgooly’s third goal to make it 3-6 to 0-12 in the 43rd minute – a score that set the scene for a lop-sided last quarter.

During it the winners stretched their advantage to ten points before Peter Collins bagged a consolation goal from a free for Randal Óg in stoppage time.

Making the point that the players have had a long season due to hurling and football commitments, Ger Collins suggested Randal Óg’s late fade-out showed their arduous schedule is beginning to take its toll. 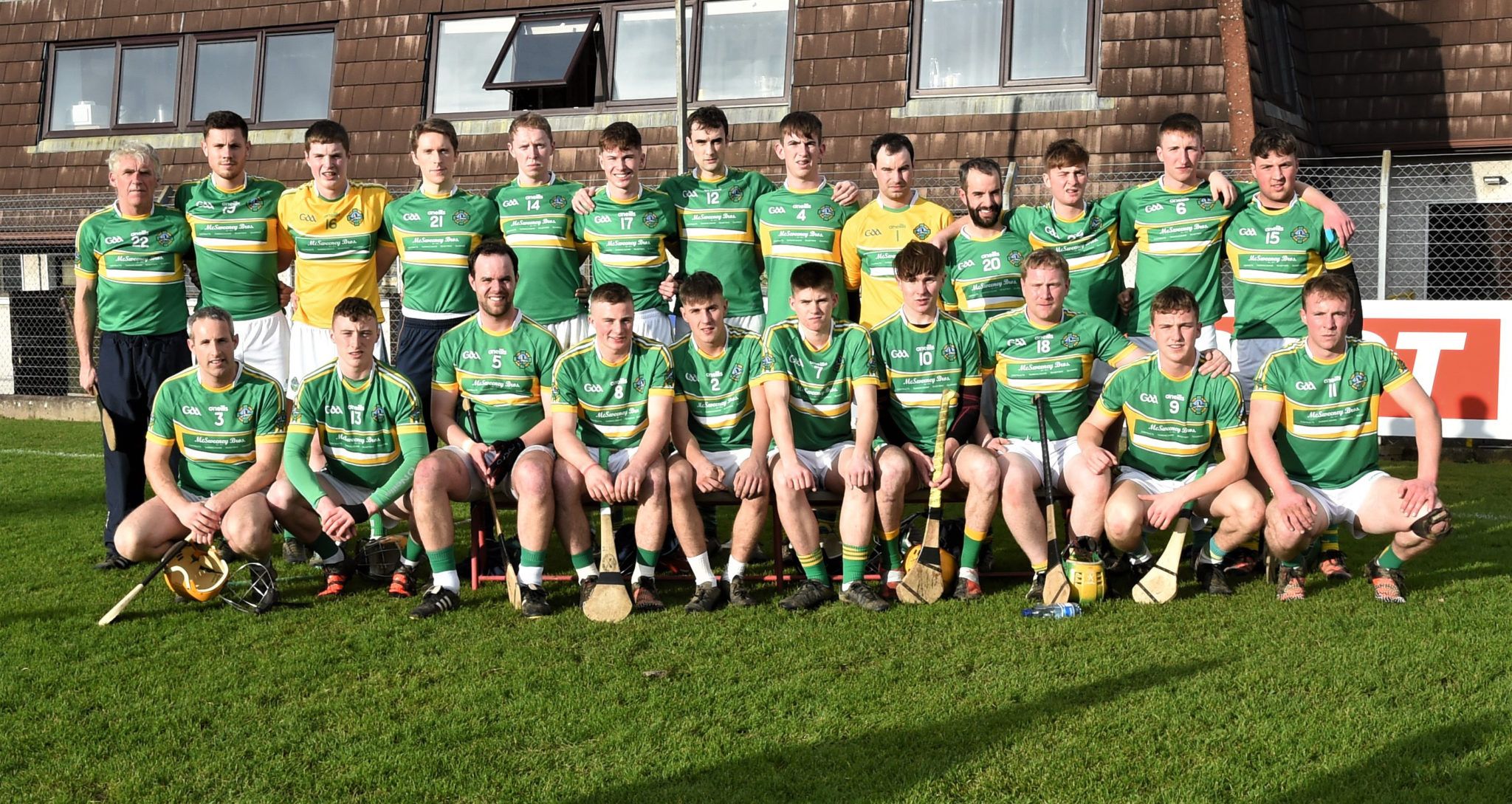 The Randal Óg team defeated by Belgooly in the Co-op Superstores Junior B Hurling Championship final at Páirc Uí Rinn.

‘The lads are running on almost empty at this stage, the batteries are flat, they’ve been playing a lot of football, and I think that definitely cost us a bit this time,’ he stated. ‘We’ve done our best to keep the hurling going, but we’re not playing it all the time, so when we got half-chances in the game, we weren’t sharp enough to take them.’

Collins stressed he was very proud of the players, revealing that ten or 11 of them are U21, which meant it was a big ask to expect them to get the better of what he felt was a physically powerful Belgooly outfit.

‘I’m not taking anything away from Belgooly, they played good hurling as well, but their physical strength was certainly a factor, and I thought they also got the breaks when it mattered most today,’ he added.

That was fair comment by Collins considering all three Belgooly goals were scored at stages of the game when they weren’t exactly motoring smoothly.

The first, a fine individual effort by full-forward Ryan Long, came in the 12th minute after Randal Óg had made the early running. Aided by points from impressive full-forward Seadhna Crowley (2) and ace free-taker Sean Daly (3) they led by 0-5 to 0-2 before Long rattled the net for Belgooly.

After Long quickly tacked on a point to nudge Belgooly ahead, Randal Óg regained their composure to go two up before being stung sharply again when Ruairi Dwyer bagged Belgooly’s second goal after a probing delivery by Eoin O’Donovan created the opening.

Making light of that set-back, Randal Óg finished the first-half with late points from Seadhna Crowley and Sean Daly to turn over 0-11 to 2-4 in front.

Had Belgooly goalkeeper Ger Quinlan not made a splendid save to foil an effort for a goal by Randal Óg wing-forward Kevin Dullea during the early exchanges, the Ballinacarriga men would have been more favourably positioned at the interval. 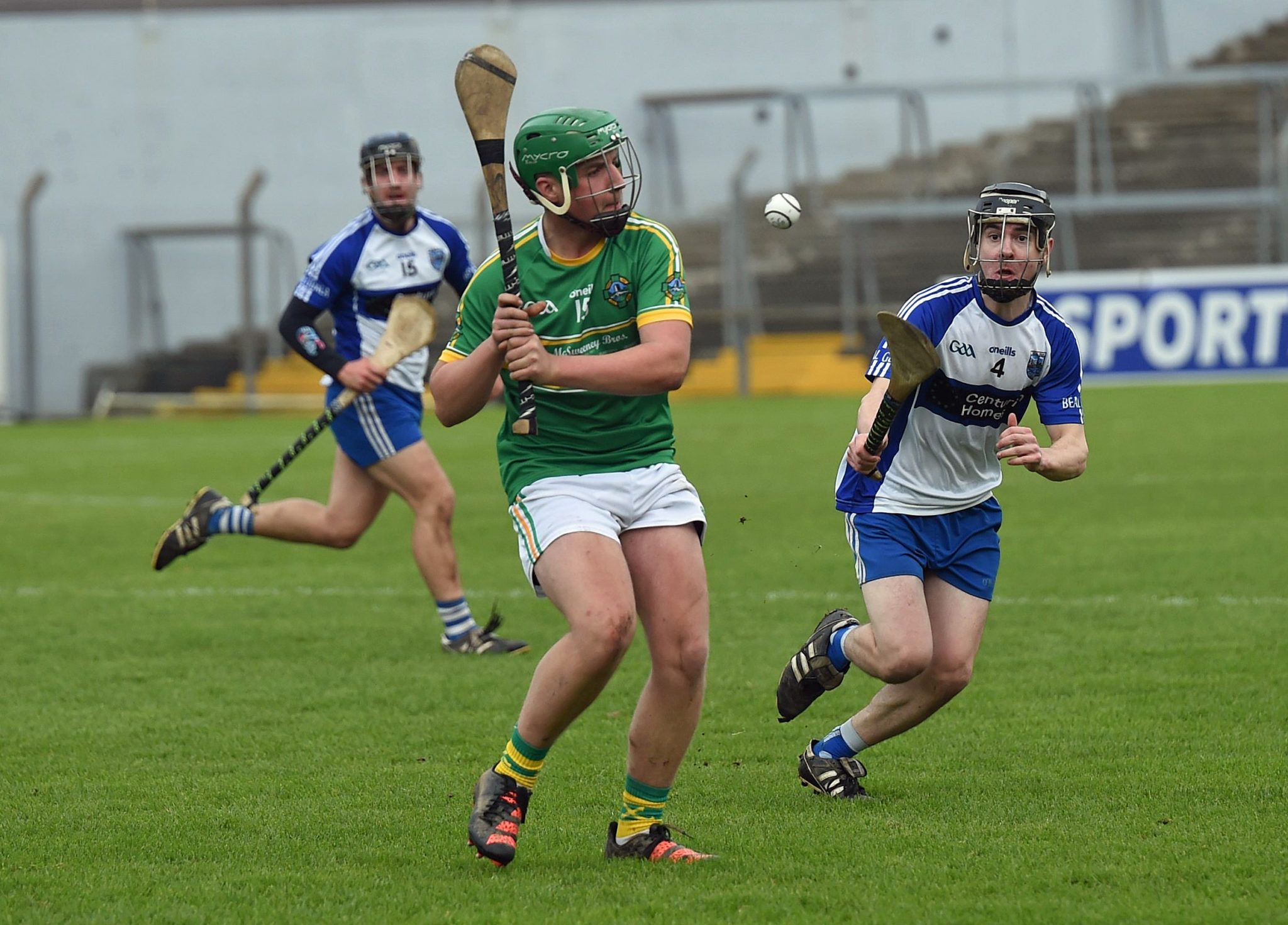 Randal Óg's Cathal Duggan gets in his shot as Belgooly's Joe O'Sullivan attempts a block.

As it was, they continued to compete well until Barry Dwyer delivered what amounted to the killer-blow for Belgooly nearing the three-quarter mark. A precision cross from the left corner by substitute Matthew Collins presented Dwyer with the opportunity to pounce for the goal that left the gutsy losers visibly deflated and paved the way for Belgooly’s convincing triumph.

Barry Dwyer dished out the bulk of the punishment from frees as the Carrigdhoun side proceeded to outscore Randal Óg by ten points to three before Peter Collins put a more respectable appearance on the scoreboard with his late goal from a free.

There could be no disputing Belgooly were well on top in the last quarter when, along with Barry Dwyer, Eoin O’Donovan and the highly impressive Ryan Long made their presence felt in attack.

Midfielders Kevin Fitzgerald and Rhys Reynolds also did well, while their defence ruled with a firm hand especially after corner-back Joe O’Sullivan was entrusted with the task of policing Randal Óg’s most menacing attacker Seadhna Crowley.

To be fair to Crowley, the service to Randal Og’s inside line of attack, in which Donncha Collins shaped up promisingly at times, was limited enough in the second half as Belgooly established control in the half-back line. They gained an edge too at midfield, notwithstanding the efforts of Randal Óg’s Sean Daly, who performed most creditably overall.

That Randal Óg were forced to rely primarily on Daly’s free-taking for penetration serves to underline their shortcomings on a day when their six starting forwards registered just five points from play – shared by Seadhna Collins, Seamus Collins and Donncha Collins – between them.

By contrast, the threat from the Belgooly attack was widespread, and, in the final analysis, there could be no quibbling about the merit of their victory.