Back home: Daniel O'Regan flew back from Boston to line out for the Drinagh Legends this Saturday against the Liverpool Legends. 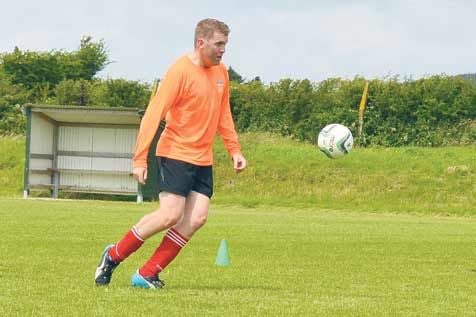 Back home: Daniel O’Regan flew back from Boston to line out for the Drinagh Legends this Saturday against the Liverpool Legends.

HE was only eight years old at the time but Daniel O’Regan can still remember Ronnie Whelan’s spectacular (and acrobatic) volley against USSR in the 1988 European Championships. One of the greatest goals scored by a Republic of Ireland player, it earned Jack’s Army a draw against the mighty Soviets, and it also left an impression on a soccer-mad West Cork kid.

Fast forward 27 years later and O’Regan, now 35, gets the chance to share a pitch with Ireland and Liverpool legend Whelan, and a host of other Pool greats, at Canon Crowley Park, Drinagh this Saturday (3pm kick-off) in the biggest soccer match in West Cork this year.

‘I was only eight when Ronnie Whelan scored that goal against USSR, and myself and Mike Doolan (who will captain the Drinagh Legends) would spend hours as kids trying to practice it and recreate it. To think we will share a pitch with Whelan, Aldridge, Houghton and the rest of them is surreal,’ O’Regan said.

The former Drinagh Rangers midfielder from the noughties – he won five West Cork Leagues, a Beamish Cup and other silverware during that decade – has also gone to extra lengths to ensure he wouldn’t miss out on the biggest day in the club’s history this Saturday.

Having lived in Boston for the past 18 months with his wife Caitlin and one year-old daughter Bridget, O’Regan has flown his family almost 3,000 miles from the States back to West Cork for the big event before heading back across the Atlantic early next week. It’s a once-in-a-lifetime opportunity for this Liverpool fan.

‘When I heard the Liverpool Legends were coming to Drinagh I didn’t believe it at first. I thought it was a joke, but as soon as I heard it was happening I knew I had to come home,’ the bio-technology engineer explained.

‘It’s amazing to think the likes of Aldridge, Whelan, Houghton McAteer are coming over to us, these are the fellas that I grew up watching on TV. It’s still hard to believe that these players are coming to play Drinagh. It’s insane.

‘There is no way that I could miss this, and especially the chance to be able to put the Drinagh jersey on one more time – that’s important. Our team has moved on so this is a great chance to catch up with old teammates, have some fun and meet our heroes.’

From a family of Liverpool supporters, along with his brothers, Robert (who is also part of the Drinagh squad for Saturday) and James, Daniel is counting down the hours to Saturday and a day that he, and his Drinagh teammates, will never forget.

‘It’s great that everyone in West Cork is buying into this event as this is a sporting occasion for everyone, not just Drinagh. It’s great that West Cork can host an event like this,’ he said.

‘The game itself should be good too because once we put on the jersey, it doesn’t matter who we play, we go out to win. But it will be surreal to be facing up against Whelan, Aldridge and all the Liverpool Legends, players I have been watching on TV since I was a kid.’

What a weekend it promises to be, as it starts this Friday with a number of the Liverpool Legends’ squad swinging into action at a golf classic in Skibbereen Golf Club, while there is a road bowling exhibition on the morning of the game, hosted by Drinagh Bowling Club. Former Liverpool first team coach Mike Marsh is also hosting a coaching exhibition, so there really is something here for everyone, including penalty competitions, bouncy castles and music at the Gaelic Bar.

Tickets are priced at €20 per adult and €5 per child (under 16), and will be on sale in shops up until Saturday morning while a limited number of tickets will be available at the gate. Turnstiles open at 1.30pm for the 3pm kick-off. The designated charity on the day is Cancer Connect.