Jerry McCarthy of Dohenys, in possession, is challenged by Aghada's Colm Power in the first round of the County Senior Football Championship. 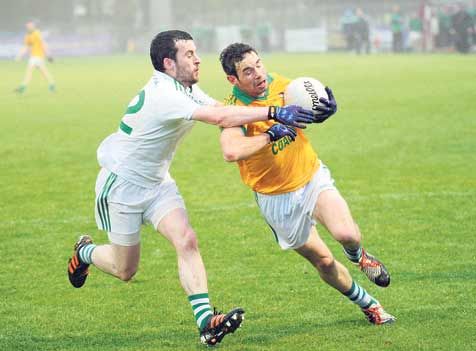 Jerry McCarthy of Dohenys, in possession, is challenged by Aghada’s Colm Power in the first round of the County Senior Football Championship.

AFTER the trials and tribulations of avoiding relegation last season, Dohenys are, no doubt, delighted to be straight into round 4 of the senior football championship this season following their first round win over Aghada.

Stephen Mohan, one of the best forwards ever produced by the club, is the man who took on the responsibility of running the team this season when few others wanted to get involved and he roped in Brian Herlihy, Mike O’Donovan and Cathal Crowley to help.

‘We were lucky to escape relegation last season,’ said Stephen, ‘and were actually beaten by St. Nick’s, so we have a good idea what to expect from them this time around. We have lost a few of that team, Alan Sheehan to Australia and Pat Collins to America, and they are big losses to us but the younger lads are filling in well.’ Operating in division 2 of the league and fancied by many to take the dreaded drop this season, Dohenys met Aghada in the first round and looked in serious trouble when trailing by 0-6 to 0-2 after twenty minutes, on a night of poor conditions which suited the stronger Aghada side. However, three good points before half time closed the gap to a single point, 0-6 to 0-5.

A goal by Daniel O’Donovan in the 45th minute proved to be the vital score as it shoved Dohenys into a lead of 1-8 to 0-8 and they went on to win by 1-11 to 0-10. That win was greeted with delight by all involved.

The younger brigade of Mark Quinn, Eoin Lavers, Jamie Carroll and Donal Rice were all impressive with the experienced hands like Patrick and Jerry McCarthy, the Collinses, Daniel O’Donovan and Denis Healy leading by example.

‘We were doing okay in the league until last week when Macroom beat us,’ said Stephen. ‘That was a disappointing result for us, but the lads have been playing a lot of hurling and it’s hard to fit both in at the same time. There’s been a big gap since the first round and keeping fellas sharp isn’t easy.

‘As well as that some have been away on holidays and we’ve been missing players for almost every game. We will be depending on the Collins brothers and the McCarthys to backbone the team again for this game. Brian McCarthy has switched to wing back and is playing great stuff. Young Eoin Lavers is playing great football and will be vital.’

In the league to date Dohenys, operating in Division 2, have played ten games, winning six and drawing one. They are in equal second place with Kiskeam, with county senior champions, Ballincollig, leading the Division.

‘We know we’re going to be in for a real tough game on Saturday,’ Stephen stressed. ‘Nick’s are a hard crowd to beat and play a tough, physical game. We’ll be hoping for a fine evening to suit our lighter players and the big pitch in Bandon should suit us.

‘We know it won’t be easy but, to tell the truth, I’ll be fierce disappointed if we don’t get through and advance in the championship. The players will have to believe in themselves and we’ll just have to turn it on for an hour.’

St Nick’s in recent years have become the great survivors in senior ranks, flirting with relegation regularly. Last season, they were beaten by Clonakilty in the first round, but beat Dohenys by a single point in the losers’ group. They were heavily defeated by Muskerry in the fourth round.

This season they had an amazing game with Douglas in the first round, looking fantastic as they raced into a big early lead, but eventually losing by 2-9 to 1-7. In round 2, losers’ group, they were well beaten by Ilen Rovers, 1-19 to 1-11, but in round 3 they surprised Clonakilty, winning by 1-8 to 0-7.

Nicks’ league form is nothing to write home about. Operating in Division 3, they have played eight games and won only one, but they will fancy their chances in this game, having beaten Dohenys in last year’s championship. In that game Dohenys found it very difficult to deal with the physique of the city side, especially around the middle of the pitch.

Trailing by 1-7 to 0-5 at the break, Dohenys closed the gap to a single point in the second half following a Denis Healy goal, but couldn’t draw level, losing by 1-9 to 1-8. Dohenys fielded twelve of the sixteen who played that day in this year’s first round against Aghada, the newcomers being Jamie Carroll, Johnny Kelly, Daniel O’Donovan and Mark Buckley.

While Nick’s looked far from impressive in their defeat by Ilen, they did everything right against Clonakilty, their physical strength making it hard for the Clonakilty forwards to score.

Prediction – This game features two of the teams many thought might be fighting out relegation but one of them will now end up in the quarter final of the county, a fine achievement. On league form, one would have to side with Dohenys, but Nick’s are a different proposition in tough championship games.

Dohenys will have to come up with a solution to Nicks’ physical advantage, which they didn’t do last season but there seems to be a better balance about the Dunmanway side this season. If they can keep the game open and use their speed to good effect, they might just scrape through by a couple of points.