FULL FORWARD Alan Brickley was the hero for Dohenys when he kicked a superb winning point in the 62nd minute of a cracking Clona Milk U21A football final in Skibbereen.

This was the final of the 2020 championship, which had been put on hold by the Covid pandemic but it was definitely worth the long wait as two utterly committed sides served up a humdinger.

The Haven entered this game as slight favourites on the heels of a fine semi-final win over Carbery Rangers. If one were to follow the old saying that goals win games, then the lads in blue and white should have taken home the Liam Farr Cup, having raised two vital green flags during the game. However, they came up against a hugely determined Doheny outfit, who just refused to lie down and responded to both goals by scoring the next three points each time to nullify the effects of the green flags.

Dohenys never veered from their game plan of moving the ball quickly and even though their top forward, Keith White, was well-marshalled by the tenacious Haven defenders, they still found a way to put scores on the board, They had reason to be grateful to free-taker Culann Barry, who clinically punished the Haven for any foul within kicking distance. 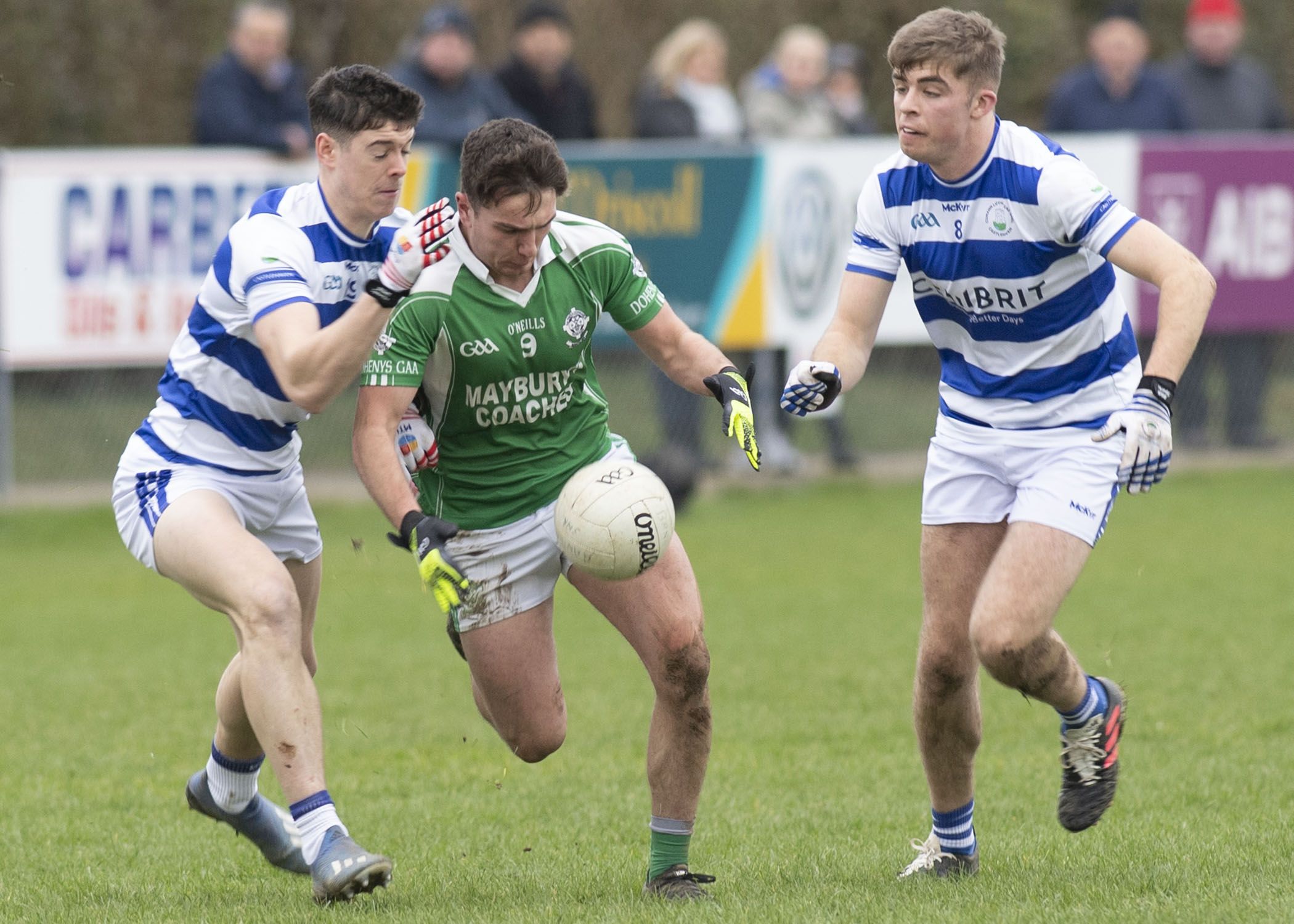 ‘We began this championship two years ago and we had a great win over Newcestown back then, that gave the team great belief in themselves,’ manager Cathal Kelleher told The Southern Star.

‘We really thought the competition was gone because of Covid but full marks to the Carbery Board who decided to finish it off now. We had a good win in the semi-final against Clonakilty last week and this group of lads have shown great enthusiasm. We knew we would be underdogs today but when they got the two goals, we responded very well each time. When they brought on their big guns in the closing quarter, it actually made our lads more determined and they really showed that in the closing ten minutes.’

The Haven certainly looked like favourites in the opening minutes as they hit the ground running and had four points on the board inside six minutes. Midfielder Andrew Whelton kicked three, two from frees, after the lively Alex Minihane had opened the scoring.

With midfielders, Bill Murphy and Culann Barry, gaining a strong foothold in the middle of the park, Dohenys began to get their running game going and responded with the next four points to level the scores. Ace forward Keith White, well held by a tigerish Tiernan Collins in the first half, opened the Dohenys’ tally, followed by strong full-forward Alan Brickley, Cathal Daly and Culann Barry (free).

The pace of the game was really picking up as Kevin O’Donovan, winning a lot of ball at full-forward for the Haven, and Barry (free) swapped points. It was Dohenys in front at the first water break, 0-7 to 0-6, when corner-back Ciarán Kelleher, a relative of the Liverpool goalkeeper Caoimhín Kelleher, swept forward to kick a good point.

The Haven started the second quarter well and when Kevin O’Donovan and Andrew Whelton (free) pointed, they looked to be getting on top. Better came in the 32nd minute when Minihane set up Donncha Maguire for a superb goal. Dohenys responded with their only point of the quarter from a Barry free and it was Castlehaven in front by 1-7 to 0-7 at half time.

It was a much more fired-up Doheny side that emerged for the second half. With Jerry Farrell commanding a lively defence, Keith White getting much more involved and the strong Rhys Coakley thundering into the game on the 40, the Dunmanway lads were soon level with points from White, Coakley and the hard-working Bill Murphy. But just when they looked down and out, the Haven struck for their second goal from impressive sub Robbie Minihane. Dohenys refused to wilt and back they came with scores from Barry and Brickley to cut the deficit to a single point, 2-7 to 0-12, at the second water break. 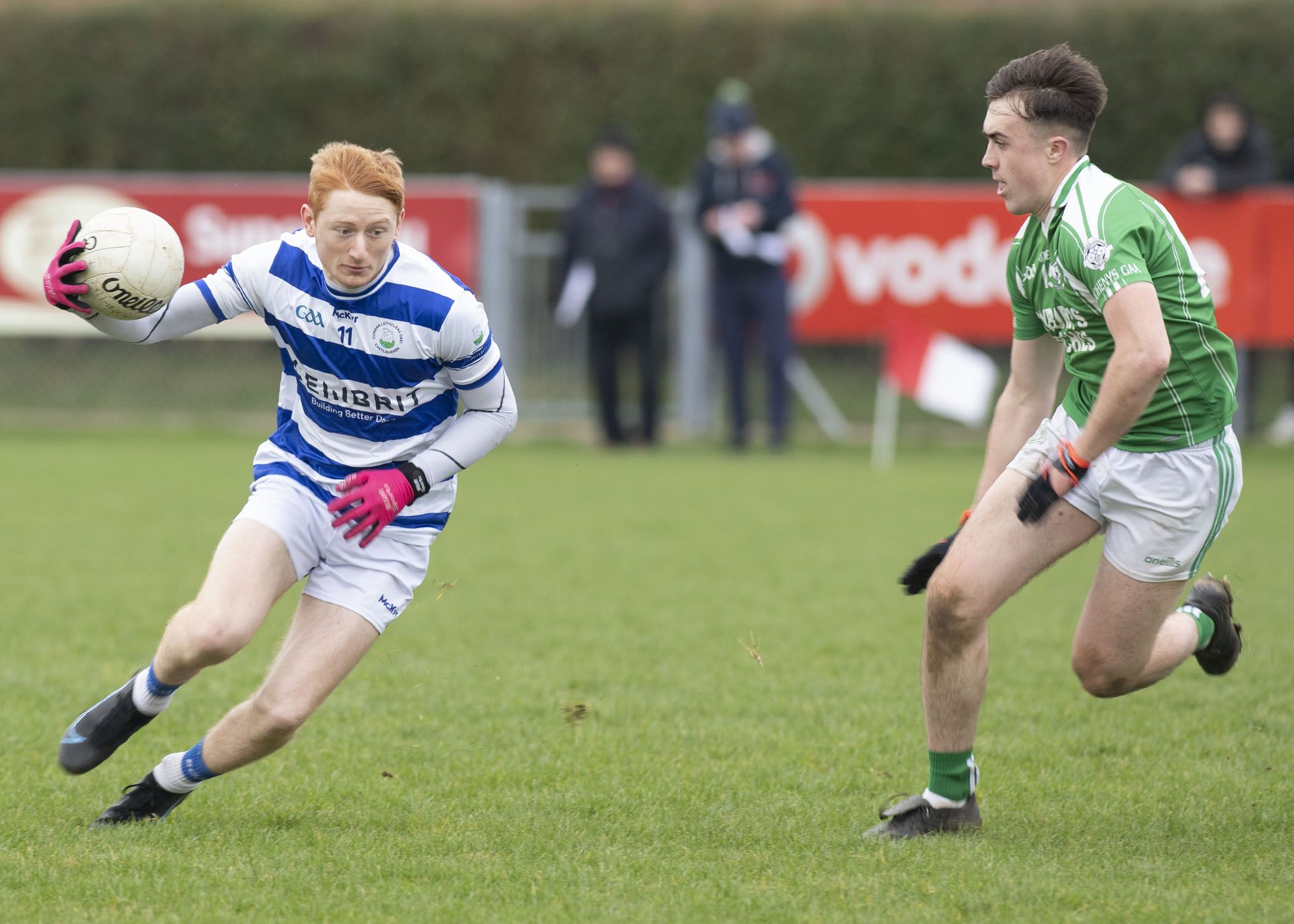 Castlehaven’s Jack Cahalane, who came on as a substitute, about to be tackled by Daragh Collins (Dohenys).

What a last quarter we had as The Haven introduced their county stars, Jack Cahalane and Rory Maguire, in an attempt to slow the Doheny momentum but there was no stopping the lads in green. An equalising point from White (free) had the Doheny supporters singing, but then it was the Haven’s turn as Kevin O’Donovan shoved them back in front in the 59th minute.

It was hectic, end-to-end stuff now as the Doheny defenders snuffed out the threat from Cahalane. When Barry equalised from a free in the 61st minute we were staring extra time in the face. Both sides tore into the fray in search of a late winner and it was Dohenys who came up trumps in the 62nd minute with a marvellous point from Alan Brickley.

The winners, who had to field without injured county player Fionn Herlihy, had to survive another five minutes of injury time as a gallant Haven side threw everything at them. Little wonder there was great excitement as captain Keith White received the Liam Farr Cup from legendary Doheny, Michael Farr, after whose brother the cup was named.

He pointed out that the 2020 championship was the 50th anniversary of the cup and that it was Dohenys who had won it in 1970. Little wonder then that this generation of Dohenys were so fired up to win it on this special occasion.

‘This is a tremendous boost for the club to begin the 2022 season,’ added a delighted Cathal Kelleher.