All for one and one for all: Former Cork camogie star Jennifer O'Leary believes the young players on this year's Cork panel are good enough to meet all the challenges that this year's championship will bring with it. 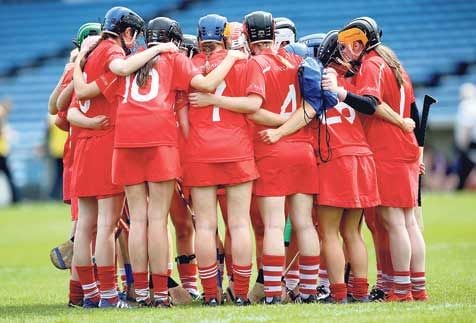 All for one and one for all: Former Cork camogie star Jennifer O’Leary believes the young players on this year’s Cork panel are good enough to meet all the challenges that this year’s championship will bring with it.

WITH the championship kicking into life later this month (June 20th to be exact), the Cork senior camogie team is heading towards the business part of the season.

It’s a new-look Cork squad this season following a number of retirements. Joanne O’Callaghan, Sara Hayes, Anna Geary and myself have moved onto new exciting ventures and it’s now time for the budding youth to have their time in the summer.

I still remember when I first got the call to join the Cork senior squad. I was in my fifth year of secondary school at Sacred Heart in Clonakilty, just 17 years old.

My mother answered the home phone, as she used to do religiously, and proceeded to have a little chat with a member of the management. With a smug smile on her face she happily handed me the phone. And that was the start of the adventure.

However, attending my first training session with an experienced squad, I did feel nervous and a little intimidated.

I found myself in a whole new camogie amphitheatre, playing and training alongside legends such as Mary O’Connor (who I have the utmost respect for), Linda Mellerick (a fitness guru), Fiona O’Driscoll (the name just says it all) and Cora Keohane (my local hero).

The word ‘overwhelmed’ certainly comes to mind when I reflect back on these memories.

I remember many stories from the dressing room – one where Linda Mellerick announced for all to hear that she was double my age! Queue a room full of laughing at the time, but as the years progressed I found myself drawing closer to the age she was talking about.

I could relate to what she spoke of during last year’s campaign when many of my teammates were falling into that youthful category and I was clocking up the many miles, pardon the pun.

It was an exciting time in those first few years to try and establish my place on the team. Competition for positions was immense and many girls in the current senior camogie squad will be able to identify with this.

I’m sure they will be enduring that rise in intensity at training as each session draws closer to June 20th against Galway. They will be welcoming an ease off the slog of endurance running but will probably find themselves cursing the endless sprints that, undoubtedly, cause an overwhelming surge of nausea in the stomach.

They may also be feeling a little tired from the elevated push at training, the first touch drills performed at the speed of sound, the gym sessions piling up and the challenge games that work on those areas they need to improve on from the hard-earned one-point win over Tipperary in the Munster final.

They may have a few muscle niggles here and there but will be quickly allowing themselves the time to recover. Yes, it’s ok to feel fatigue, girls, and yes, you are fit. It’s mind over matter at this stage.

There are those dedicated stalwarts of the game – Aoife Murray, Gemma O’Connor, Briege Corkery and Rena Buckley, to name but a few – who are tirelessly acting as the driving force for the team.

They are the encouraging voices and the leaders both on and off the field, playing their own game but also riling up the squad in those few hours where you are totally focused on the game at hand.

Orla Cotter, with her ability to change a game in a second, will be building on her already impressive scoring record from league and championship, and her comrade Eimear O’Sullivan will be solid and strong in defence, as she always is.

The new kids on the block – Amy O’Connor, Orla Cronin and Hannah Looney – will be eager to impress; their fresh legs and their desire to make this team will drive them on even more.

The youth of the squad should count themselves very lucky (as I know they do) to be able to put that coveted and special red jersey on each time they take to the field.

Making the most of every training session, every match and every opportunity is so important to drive forward with this team of exceptional players. There’s no better feeling than representing your county and it would be untrue of me to say that you won’t miss it when it comes to an end.

At times it’s like losing a limb, a vital part of your existence.

Cork are the reigning All-Ireland champions. But with success comes much expectation. They will be expected to dominate in the championship as they face Galway, league champions, in the first round.

For some that weight and pressure of performing will be a massive motivation, a driving force to attack when the opportunity presents itself.

There will be outsiders who do not see the enormous work these girls put in on a daily basis. They will look to some of Cork’s performances, just based on score-lines, and say that Cork are depleted and understrength. It happens every year. I know. It’s infuriating. I have been there.

However, they underestimate the power of a collective goal and overwhelming motivation to prove the less-than-positive wrong.

It seems that for every title a team wins, there always remains a question about their ability to win again. Look at Cork’s record, we have 25 All-Ireland titles in our arsenal – we should be confident and not questioning our ability.

After a brilliant win in 2005 against Tipp, in 2006 a lot of questions were again asked of the Cork team. Can Cork do the double? Was last year just a fluke? It was a period in time where Tipp were the kingpins and were dominating the championship.

I remember many of the players were very annoyed but passionate and vocal about how we constantly have to prove ourselves, prove our worth in each game we play. I guess that is why we are and have been so successful.

We won again in 2006 because Cork continues to treat each game as if it was their last. Cork play to prove that, yes, we are good enough, and, yes, hard work does pay off. People don’t look at your impressive CV when it comes to playing the fastest field game in the world, it’s all about the here and now. Make something happen. Don’t wait for it.

The girls don’t expect praise and they also don’t expect each game to go as they have planned. There is no pressure; the only pressure is the weight you put on yourself.

Cork are a rejuvenated side, they don’t have anything to prove but you can be sure they will try their very best to prove they are deserving champions. I’m excited about their championship campaign with Galway, Limerick, Offaly and Wexford gearing up to face a hardworking side.

I wish Cork all the best for the season ahead. Let the games begin.