He's back: St Colum's returning Cork star Alan O'Connor in action against Bandon in the Rowa/Rowex Pharma JAFC round one game at Castletown-Kinneigh on Saturday evening. 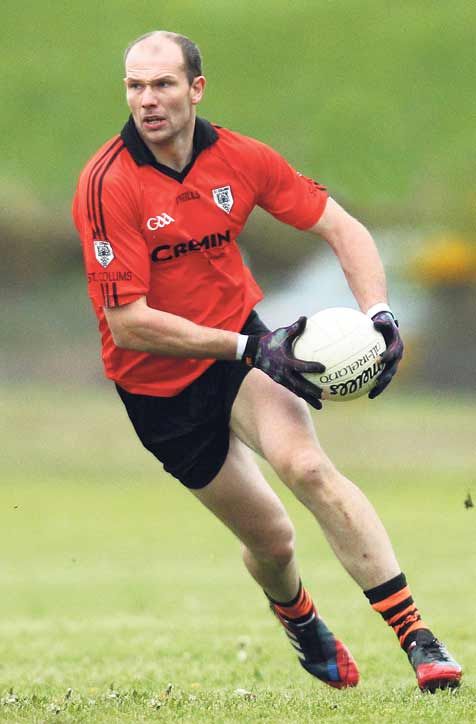 He’s back: St Colum’s returning Cork star Alan O’Connor in action against Bandon in the Rowa/Rowex Pharma JAFC round one game at Castletown-Kinneigh on Saturday evening.

RETURNING Cork midfielder Alan O’Connor will add a physical presence to the Rebels that has been missing, insists his former inter-county teammate Nicholas Murphy.

St Colum’s clubman O’Connor (29) was back in Cork training this week following the surprise announcement that he was making his inter-county comeback, 18 months after retiring.

It’s no secret that Cork have struggled in midfield the past two seasons, and their shortcomings were painfully obvious in last Sunday’s league final hammering (1-21 to 2-7) against Dublin, so O’Connor’s comeback couldn’t be more timely.

‘He’ll definitely bolster the whole set up there because he is a natural midfielder,’ Murphy told The Southern Star.

‘To be fair, the Cork midfield options have been changed a lot because they have been trying different combinations. Fintan (Goold) seems to be there as the regular midfielder and there are different guys coming in with him.

‘It’s very hard to get a pattern working when there is no consistency. Guys need to know what the other fella is doing, and that only comes through game time. Alan would have played enough times there himself whereas other guys were being put into a position that they are not naturally accustomed to, like (Eoin) Cadogan and (Conor) Dorman.

‘Alan will be a big addition because of the work rate and the physicality that he brings plus the experience of being a midfielder as well.’

Having won an All-Ireland with O’Connor back in 2010, Murphy is better placed than most to judge what the Carbery footballer will add to Brian Cuthbert’s set-up.

‘One game that really stands out was when he came on at half time below in Killarney a few years back and he changed the game on his own. It was his pure power, energy and enthusiasm that blew Kerry away that day – they had no answer to him. That’s the kind of attitude he brings to a team,’ Murphy said.

‘For fellas who have never trained with him before, the guys who have come in since he left, wait until they see him train. He travels the furthest and he puts everything into it.

‘I remember at the height of it Alan bursting a gut in training, setting the tempo, and it gave everyone else a lift because he sets the bar for effort and work rate. He would definitely bring on the guys next to him.

‘His return will be a massive boost to the set-up. From playing and training with him before, his attitude will give a fierce buzz to the set-up.’

Carrigaline footballer Murphy, who retired from Cork in late 2012, firmly believes the Rebels will be boosted, and become a better team, by O’Connor’s return.

‘What he brings to the table is complete honest work rate and physicality,’ Murphy said.

‘It will take time. He needs a month or two to get back up to pace, to get back into the regime, but once he is back it won’t take him long to get up to speed. It’s a huge boost for Cork football to see him back because he has a lot to offer.’