LIBBY Coppinger is experienced enough to be able to treat All-Ireland final week like any other week.

She’s been here before. Plenty of times between camogie and football since she made her debuts for both teams in 2016. The 25-year-old knows the pitfalls these last few days before an All-Ireland final can bring, the distractions that can sidetrack a player, so she’s not changing her routine this week.

‘I’m working away as normal and that’s a great way to keep your mind off the game,’ says Coppinger, who works as a depository officer with Alter Domus Ireland. There, the Cork camogie full back, similar to her role on the pitch, protects investors.

‘I’m sure they would have no problem if I wanted to take a day or two off work but I think you’d only be going stir crazy in your head, overthinking things. It’s better to keep the week as normal as you can.’

Coppinger is working from home in Kealkill. She’s taken over the granny flat, that’s her office space and it works. The dual star’s commute from West Cork to the city for training is a two-hour round trip and since the footballers lost their All-Ireland semi-final to Meath on August 15th, her mileage has halved. A silver lining to that loss – even though she would have much preferred to advance to the football final, too – is that it has allowed the St Colum’s star to focus fully on camogie these past four weeks.

‘I was looking back at the last few years and I’ve never actually had this much time to focus on the one sport. That has to help. It’s great to be there for all the camogie sessions the last few weeks. The management teams in football and camogie have always been great to make sure we don’t overload when the two are running side by side, but these weeks I don’t feel like I am playing catch-up all the time and that’s nice too.’

It also means that Coppinger has more time for rest and recovery, and all that helps.

‘With the football finished, I’m only going up three days a week to Cork now so it’s not as taxing on the body as it is when you are driving up and down for both. It’s a lot more doable now,’ she says, days out from the biggest camogie game of the year.

This will be her fourth All-Ireland senior camogie final. In her debut season, 2016, Coppinger came on as a sub as Cork lost to Kilkenny. The following campaign she started at corner back in the final as the Rebels beat the Cats by a point. In 2018 she started again, this time at centre back, and Cork defended their title. It’s no secret she’ll start this Sunday’s final against Galway in Croke Park (4pm throw-in) and in a different position, again. She’s manning the full back slot these days.

‘There is a bit more pressure back there. You can fumble a ball out the field and it’s not the end of the world, but if you fumble back there it’s a lot more dangerous. You want to stay as close to your goal, too.

‘Amy Lee in goal has been phenomenal. She has really led us. It’s definitely reassuring when you have Amy back there, telling us “if you mess up a ball then I have you covered”. That’s a great support to have. If you make a mistake no-one will give out to you, we are all human and we are all trying our best.’ 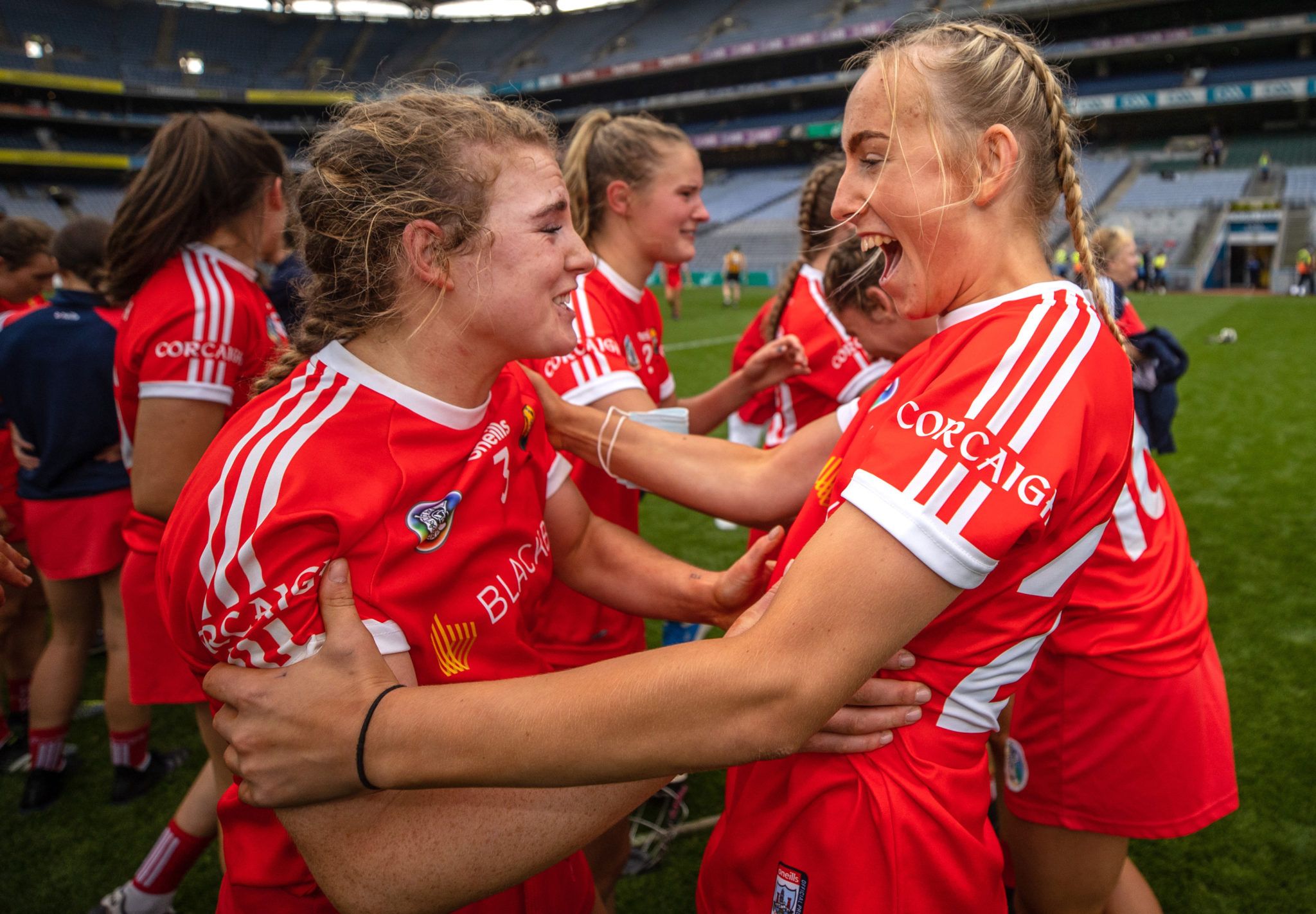 Mistakes have been few and far between for Cork in this run to the All-Ireland final. The Rebels topped their group that also included Waterford, Dublin and Down, keeping two clean sheets. Then came the dramatic 0-15 to 1-11 All-Ireland semi-final win against Kilkenny at Croke Park on August 29th, as Linda Collins scored the injury-time point to dethrone the champions and catapult the Rebels back into a first senior championship final since 2018. That was a huge result for a Cork team that had watched on as Kilkenny and Galway contested the last two finals. The Rebels showed great character to battle back from two points down in the final minutes.

‘We still have plenty to work on but that was a massive result for us,’ Coppinger says.

‘It was like we had a block getting over the semi-finals the last few years, losing in 2019 and in 2020. For other counties that doesn’t seem like too long at all, but for us those two semi-final losses were so close, only a puck of a ball in both years, so it was huge to get over the line this time.

‘It’s always close with Kilkenny and it was great to be back on the right side of the result. It was a huge relief, but we know the job isn’t done. We need to put in a performance against Galway on Sunday but we have taken a huge boost.’

Coppinger knows the threat the Galway attack carries. Their inside forward line is lethal, she says, so the West Cork woman will have to be on her toes. Cork boss Paudie Murray has no fears though.

‘Libby has played very well this season and you can see how she has matured as a player. She is playing with far more composure than she had before but she is 25 years old now and in that age bracket where you expect players to step it up – and she has. She is a better player now than she was last season,’ Murray explains.

Coppinger feels ready, too. She’s been here before. All-Ireland finals in Croke Park. Big occasions. The Colum’s woman is at home on the big stage. That experience is priceless as we move closer to throw-in. She will have time to herself, too, as she drives from home to training this week.

Coppinger is the farthest Cork player west and makes the journey to the city on her own. She likes that, too. It’s a bit of time to herself.

‘I like having the time up and down on my own, to get you feeling right. I stayed in Cork one night for a morning session and I felt like I was nearly half asleep the next day because I didn’t have the drive up on the morning to wake me up!’ she says.

There’s a long drive for the Cork team on Sunday morning when they set out for Dublin and Croke Park, but it’s a similar routine to the semi-final against Kilkenny, so nothing new there.

Coppinger will take it all in her stride. She knows the heavy lifting is done now and it’s about fine tuning before Cork take centre stage, determined to wrestle back a crown they haven’t worn since 2018. Full back Coppinger is key to this mission.

She’s been here before and has the medals to prove it.