Conor Hourihane has impressed with his form since joining Swansea on loan in January.

THE Bandon boy who honed his talent in the Town Park with his local club will strut his stuff at Wembley for a SEVENTH time in six seasons this Saturday afternoon.

A man not fazed by the big stage, Conor Hourihane (30) wants to make his experience count and inspire Swansea City to Championship play-off final glory – and promotion to next season’s Premier League.

‘I hope I can make my experience of playing at Wembley count,’ he told The Southern Star.

‘I have been very fortunate that I have played there six times already. My record is okay – I have won three and lost three so I have experienced both sides. I don’t have to tell you which I prefer.

‘Hopefully I can use that experience to my advantage, to the team’s advantage and for anyone who needs a little bit of help or advice.

‘Whatever I can do to help the team along, whether it’s an inch or a mile, I’ll do it. Hopefully that will help us get the result that we want on Saturday.’

In April 2016 Hourihane captained Barnsley to Johnstone’s Paint Trophy glory. That was his first time playing at Wembley and he has played there five times since. There were the highs of play-off glory with Barnsley (League One final win in 2016) and Aston Villa (Championship final victory in 2019). Then there were the lows of three defeats there – twice in Villa’s colours (2017-18 Championship play-off final and 2020 Carabao Cup decider) and once for the Republic of Ireland (2020 international friendly).

‘The Villa win in 2019 is my best memory there,’ Hourihane said, ‘because I worked so hard to get to the Premier League and that’s the game that got me there. We had lost to Fulham 12 months earlier in the play-off final so to come back and win there against Derby was extra special. 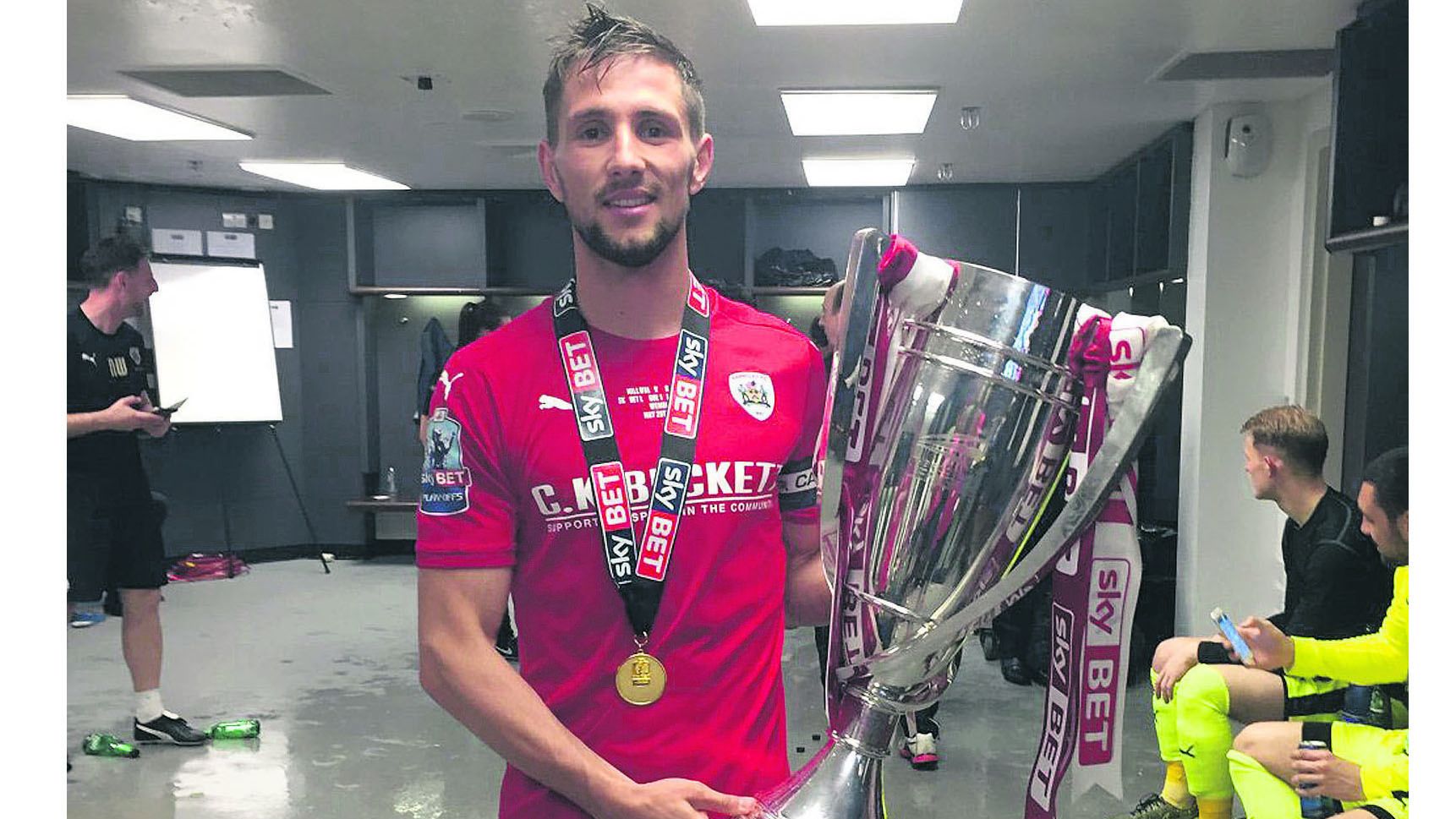 Conor Hourihane captained Barnsley to a 3-1 victory against Millwall in the 2016 EFL League 1 play-off final at Wembley.

His on-loan club can take a huge step forward with victory against Brentford on Saturday, and get back into the Premier League, and this is exactly the challenge he wanted when he left Villa in January to join the Swans on loan.

‘I’ve had a few promotions in my career so hopefully I can bring that little bit of experience,’ the Bandon man said in his first interview in Swansea colours, and five months on he has helped the club to the cusp of the Premier League.

‘I said when I joined that the club ticks all the boxes, and it does. This is a big club with a great fan base and they deserve to be in the Premier League – and I want to help get them there on Saturday,’ Hourihane said.

His own future is up in the air as he is set to return to Villa after his loan spell with Swansea expires at the end of this season. Hourihane has one year left on his Villa contract and the expectation is that he will move on. He turned 30 in February and he’s desperate for regular playing time, but he’s not thinking about his next move yet.

‘Saturday is the only goal in my head right now,’ he said.

‘We’ll see after that about what’s next but it would be very selfish of me to talk about my future. We’ll see what happens afterwards, but right now the goal is to get Swansea over the line and get them to the Premier League.

‘That was my goal when I came here and we are very close to achieving that. We’ll give it everything to get there.’

The Irish midfielder with the magical left foot is determined to make his mark at Wembley this Saturday. In his previous six games there he hasn’t scored. The goals have dried up too in recent times after an explosive start to his loan spell with Swansea when he netted four goals in his first five games. In total, he has five goals in 21 games, as well as two assists and 19 key passes. With his last strike coming in a 1-0 win against Luton on March 13th, he’s due a goal.

‘That’s the dream, isn’t it? A winning goal in a final at Wembley, but I would take not scoring for the next ten games if it meant that we win this weekend,’ he said.

‘I scored five goals in eight at the start when I joined, and it would have been some serious goal-scoring to keep up that ratio. It has dried up a little bit and I would have liked to have got one or two more after getting so many early on.

‘But whatever I can contribute, whether it’s a goal or an assist or just play my part, once we win that will be good enough for me.’

So, what’s the key to winning a play-off final at Wembley?

‘It’s a bit of everything, really. You need to perform, play well, stay calm, everyone has to play their part and you need a bit of luck too.

‘You need a bit of momentum going in and I think we have that, we’re coming off the back of a tough semi-final against Barnsley where we played well and had to battle too, so we know we can win whatever way the game pans out.’

Hourihane wants to get back in the Premier League. He can lead Swansea there this Saturday. Do that, there will be no shortage of suitors queuing up for the Bandon man.