ÁINE and Clare O’Leary rolled back the years in 2020 to guide Clonakilty to a Cork county intermediate title 11 years after winning an All-Ireland LGFA championship with the same club.

The O’Leary sisters have been a mainstay in the Brewery Town’s ladies’ football set-up since first gaining brief success with Kilmeen. Attending Sacred Heart Secondary in Clonakilty saw the Rossmore natives win an All-Ireland senior B schools’ title in 2007.

2009 proved a magical year as Áine, Clare and a host of other former Kilmeen players joined forces with additional Ballinascarthy imports on a talented Clonakilty panel. Amazingly, league, county, Munster and All-Ireland glory followed during the following 12 unforgettable months.

‘We played football with Kilmeen and won a county title with them up until around the time we entered our second year of secondary in Clonakilty,’ Clare said.

‘I made friends with the likes of Juanita Brennan and Ciara O’Mahony there. So, in the very beginning, we got a load of those Clon girls to come out and play for Kilmeen as they had no ladies club. Kevin O’Donovan trained us and we won a junior B football county title. Then, over a period of time, the Kilmeen team was disbanded.’

Áine takes up the story: ‘Not long after that, we won a secondary school All-Ireland title before the Clonakilty ladies football team really took off. The two of us, and Marie O’Donovan who had previously played with Kilmeen, ended up joining Clon thanks to Siobhan Lyons (now Daly) and a few others getting things going there. Things really took off in 2009 when a great Clonakilty team won the (junior club) county, Munster and All-Ireland inside 12 months!’

Those were unforgettable days for the O’Leary sisters, growing up in Rossmore, attending secondary school and attaining All-Ireland glory with Clonakilty.

Throughout their playing careers, the sisters’ triumphs were witnessed by their father Jerry, older sister Marie, younger brother Daniel plus an army of close friends and relatives.

Sadly, Áine and Clare’s mother, Anne, passed away when the girls were still in primary school and never got to witness her daughters’ on-field heroics.

Clare added to her personal medal haul by claiming U14, U16 (two) and minor (two) Munster and All-Ireland titles as a centre-back with Cork. Áine enjoyed similar inter-county success, picking up an U14, U16 (two) plus a Munster U14 Player of the Year award.

Plenty of highs and lows were experienced until this past year when the Covid pandemic meant none of the Brewery Town’s squad were able to travel abroad or get involved with their Cork LGFA inter-county set-ups during the club calendar.

That resulted in manager JJ Deasy and his backroom team having their strongest available panel ahead of the 2020 county intermediate championship.

‘Covid-19 meant none of the girls were able to take up their J1’s to America and Martina O’Brien and Moira Barrett were around as well,’ Clare explained.

‘That was the difficult thing during the previous championships, girls going off at different times of the summer and never having a solid 20 players at every training session.

‘The commitment we got from every single player on the panel was huge last season. There were no pubs or clubs open at the weekends so everyone got stuck into the training and everything clicked. Over time, a great bond built within the squad and we really gelled. Our confidence grew with every victory and the spirit was really good.’

Áine echoed her sister’s sentiments and pointed to the addition of Iain O’Driscoll to the Clon coaching team as an important moment.

‘Iain coming in to coach the Clonakilty senior team made a huge difference,’ Áine explained.

‘Iain pushed the standards up from day one and everyone bought into it. We were lucky to have such a brilliant coaching team with JJ, Joe, Iain, Yvonne and all the others.

‘Then we got (former Clonakilty county champion) Casey O’Donovan to come in and help us and he took everything up another level again. The main difference between this and last year were our trainers, no doubt about it.’

‘The big thing for me was how our training was of such a high standard and got better with every session,’ Clare added.

‘It was like being back training with Cork where you dreaded who you would be marking as everyone was trying to get on the starting fifteen. Training was ultra-competitive but, looking back, we needed that. Previous years, we would be sauntering into training whereas this season, there were punishments of laps for anyone who was late.’

Clon took their time to find their feet in the county championship, losing at home to Glanmire in their opening game before putting up a big score to defeat Araglen Desmonds Buí.

That set up an intriguing county semi-final clash against a Rosscarbery side Clonakilty knew well. What followed was one of the games of the season at Cork LGFA club level. An intense, physical local derby became a battle of wills before Clonakilty emerged 2-10 to 2-3 winners. 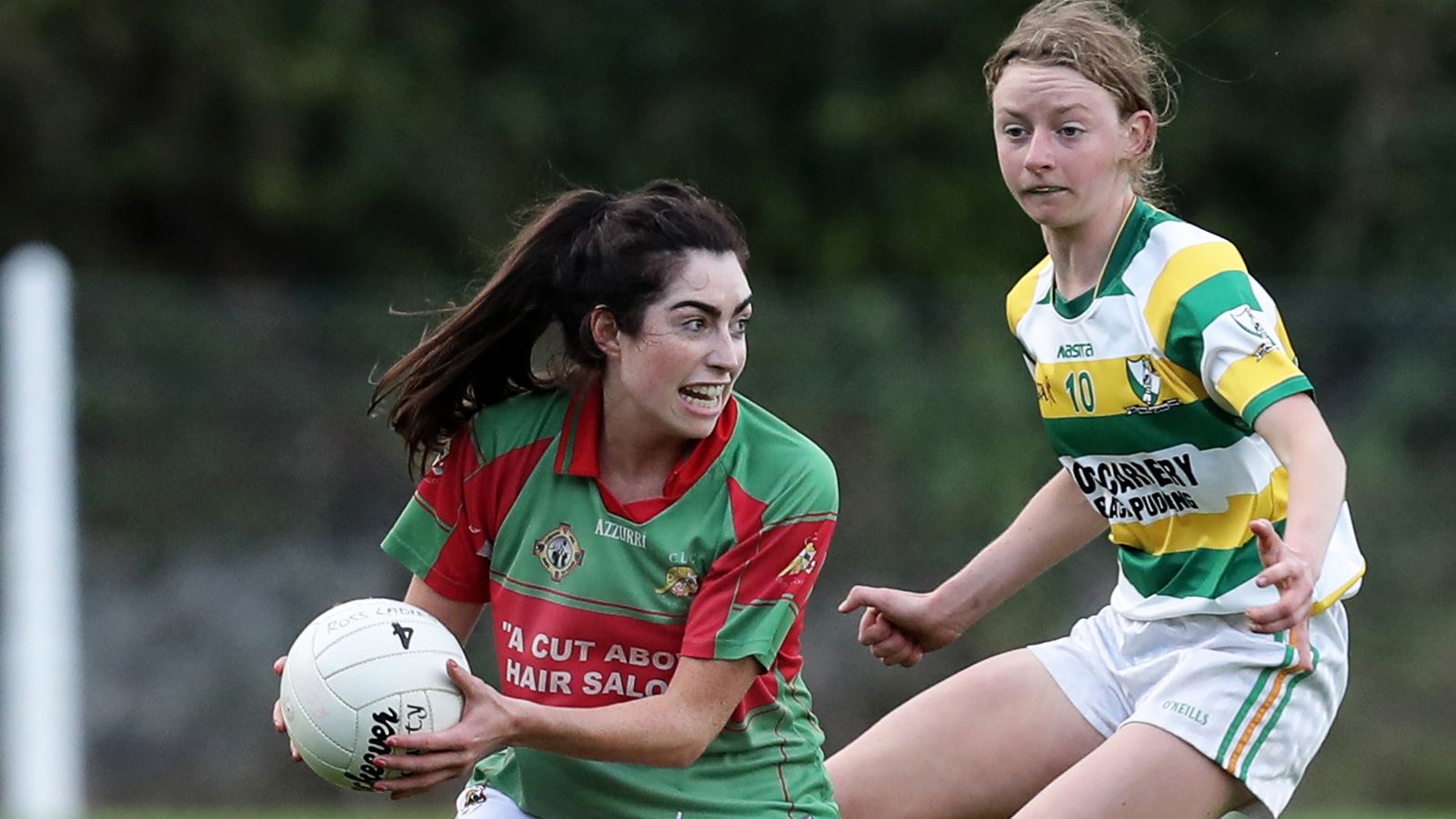 ‘We had lost to Rosscarbery in the previous year’s county championship by a point and I never in my life felt so bad after a game,’ Áine recalled.

‘That drove us on more than anything that night. It was a great win considering how well Ross were going in the championship at the time. We were underdogs heading into it but with nothing to lose. Everyone was dying to win that game and we managed to do it which was brilliant.’

‘I remember that was one very tough game,’ Claire commented.

‘They had Sarah Hayes and Fiona O’Callaghan in the middle of the field. They were such a strong pairing so we were kept busy and it was a battle right up until the end.

‘There was a huge sense of relief at the final whistle because it was such an intense game. There was a real sense of ‘let’s go the final and finish it off now’. We got such a boost and a sense of belief from winning in Rosscarbery.’

A hotly-tipped Glanmire were expected to repeat their earlier championship victory over the Brewery Town in the 2020 Cork LGFA intermediate county final at Kilmichael.

Clonakilty had other ideas however, producing their most complete performance of the year to stun the favourites 2-8 to 0-11 and capture the intermediate trophy.

‘Everyone was buzzing for the final and up for it more than being nervous,’ Clare remembered.

‘I remember thinking to myself during the game, we had so much possession, so if we lose this it will be our own fault.

‘There is always something different about a final though, it is different to every other game. We felt good on the day but it was a hard game to get into.

‘Thankfully, we defended brilliantly and took our scores in the second half. We won it in the end, anyway, thank God!’

And a Munster championship beckons in the new year where Áine and Clare are expected to feature prominently once again.