THEY came from nowhere to become All-Ireland junior A ladies football champions and 11 years on, Clonakilty have nothing but fond memories of that unforgettable season.

It reads like a Hollywood movie script, but the people involved and those that supported the Brewery Town’s ladies footballers know 2009 was all too real. From zero trophies to league, county, Munster and All-Ireland LGFA glory in twelve crazy, unforgettable months.

Their junior team, in existence a mere five years, made little impact during early campaigns. A few hammerings were suffered but, over time, results slowly began to improve. It wasn’t until 2008 and reaching a county junior C semi-final that Clon finally looked capable of challenging for a trophy.

True, many of the squad had already experienced provincial camogie and All-Ireland secondary school successes. Yet, the arrival of players from neighbouring club Kilmeen (after they temporarily disbanded), Ballinascarthy recruits plus a host of Clonakilty underage graduates saw the Ahamilla club’s fortunes dramatically improve. Add in dedicated coaches Denis Enright and Rob Lowery and Clonakilty were ready to make their presence felt.

Beulah McManus was the team captain in 2009, a year the talented defender would experience the thrill of lifting four trophies in front of her team’s supporters.

‘We lost the majority of our junior games up to about 2008 before everything came together over the next 12 months,’ McManus recalled.

‘A lot of our players had already achieved success at schools’ level. We won the 2007 All-Ireland senior B schools’ title with Sacred Heart Secondary in Clonakilty. A lot of the Killmeen girls that joined the Clon junior squad were part of that success and many of that panel had also won Munster Camogie titles as well.’

Some context is needed at this stage of the story. 2009 was also the year Clonakilty opened their state-of-the-art complex in Ahamilla and the men’s senior team claimed Cork SFC glory at the expense of St Finbarr’s. It is to the Clon ladies footballers credit that they made their mark during such momentous times for the Carbery club.

Rewind five years to 2004 and a dedicated committee managed to set up and successfully run Clonakilty’s underage ladies football programme. A junior team had yet to materialise. Enter Siobhán Lyons (now Daly) and a group of friends who, in conjunction with their committee, got the ball rolling.

‘We were lucky to have such a fantastic ladies football committee in place at the time otherwise we would never have got going,’ Daly said.

‘We had no senior team back then. I wanted to play football but there was nothing for girls my age or for older individuals who wanted to keep playing GAA. Look, it took time, but we got it going and within five years we had a really talented bunch thanks to the Kilmeen and Ballinascarthy girls that joined up with us.’

Beulah McManus added: ‘Siobhán did an awful lot of work both on and off the pitch and was as much a captain as I ever was of that team.

‘Without Siobhán, and all her dedication, we never would have achieved the success that we did. Looking back, it is sad that three other individuals who were hugely influential in getting the team up and running have since passed away. Fr. Eddie Collins, Paul Harte and Kevin Crowley gave so much to our club, especially in those early days.’ 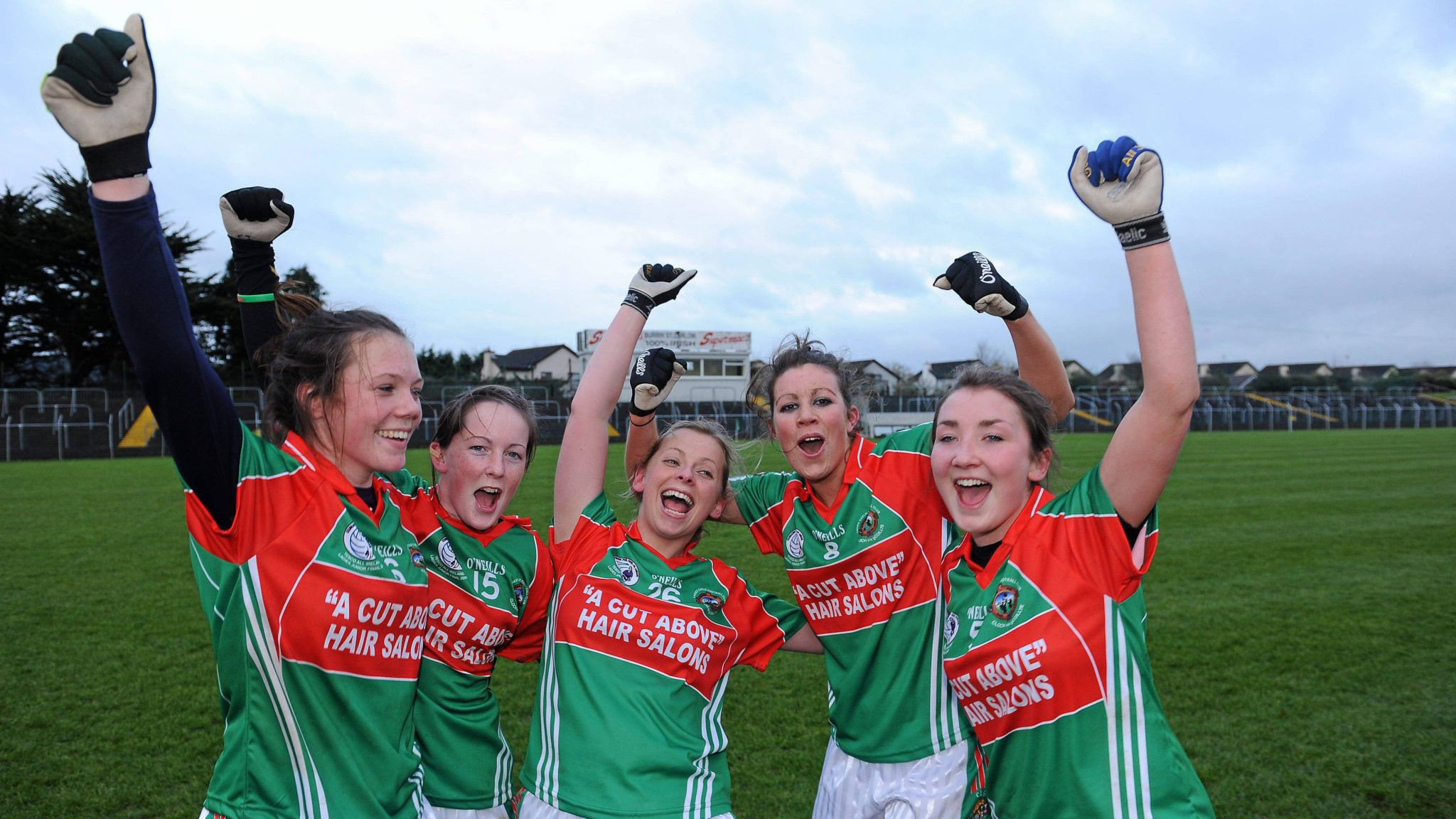 Clonakilty’s pathway to glory began with weekly training sessions and 30 players dedicating themselves to the cause. An undefeated junior B league campaign and first trophy success saw Denis Enright and Rob Lowery’s panel immediately upgraded to the county junior A championship.

Played in round-robin format, the Brewery Town laid down an early marker by holding highly-fancied Nemo Rangers to a draw before overcoming local rivals Carbery Rangers and remaining undefeated against Naomh Abán, Kildorrery and Valley Rovers. Clon would meet old friends Nemo once again in the decider.

The momentum and confidence gained from an undefeated championship run saw Clonakilty defeat Nemo 2-9 to 0-7 to become county champions despite awful conditions. It was a marvellous achievement and celebrated wildly but the best was yet to come for an improving squad.

‘I think the turning point for me, and possibly a lot of the other girls was when we beat Carbery Rangers,’ Beulah McManus said.

‘There was a huge buzz around that local derby. They were a very good team, but we played really well on the day. It was a brilliant game, but we won it. From that moment on, we knew we were a good side and our self-belief grew. No one thought we would go on to achieve what we did though.’

The newly crowned county champions had little time to bask in the glow of their success before the 2009 Munster JAFC campaign began. Stepping into the unknown, the West Cork club weren’t sure of what to expect but taking it one game at a time, underlined their quality with a string of superb results. Limerick’s Dromcollogher/Broadford were swept aside 3-22 to 4-4 in the opening round before Clonakilty obliterated Waterford’s Dungarvan to set up a Munster final against Dr. Crokes from Kerry.

‘We all felt getting out of Cork was actually harder than the Munster championship, but no one was thinking too far down the line,’ McManus admitted.

‘Dr Crokes were very tough opposition in the Munster final at Carrigdrohid. We won handy enough in the end, 3-11 to 1-6, but it was only in the second half that we pulled away. It was the most physical game that we played up to that point but what a great win’.

Amazingly, Clonakilty had become provincial champions in their first season at junior A level. That unheralded achievement secured an All-Ireland semi-final berth and, to this day, one of the most memorable games ever played at the Ahamilla Complex.

Corduff Gaels from Monaghan made the long trek south to face Clonakilty for a place in the 2009 All-Ireland final. It would be a hugely important moment for ladies football in West Cork as it was the first competitive game played in front of the new stand at Ahamilla.

In front of a bumper attendance, the first All-Ireland semi-final ever to be held in Clonakilty didn’t disappoint. Goals from Marie O’Donovan (2), Sharon Whelton and Erica Jennings cemented a 4-8 to 2-7 victory for the hosts and their ecstatic supporters.

‘That was an amazing day and actually more memorable than the All-Ireland final,’ Siobhán Daly stated.

‘It was just an incredible day because we got so much support from the local community. The new stand was packed, and it was a tough, challenging game. God, what a great one to win. We were glad when the final whistle blew!’

‘We definitely felt the importance of that occasion,’ recalled Beulah McManus.

‘The week leading up to playing Corduff was intense and there was a lot of talk about whether the main pitch and new stand was going to be an option for us.

‘It was a relief to know that the semi-final was finally going ahead in Ahamilla and on the main pitch too. I think a lot depended on the men’s senior team’s progression in the Munster championship, but they got knocked out by Kerins O’Rahillys.

‘That brought a new sense of expectation and pressure however, but it was an amazing feeling to run out in front of the new stand and in front of your whole town supporting us. I’m not sure if it is a personal thing but I don’t think we performed as well as we should have even though, thankfully, we got the win in the end. It felt like we won the All-Ireland that day.’

And so, unbelievably, and unexpectedly, Clonakilty found themselves preparing for an All-Ireland final appearance against Sligo’s Drumcliffe-Rosses Point. The build-up was hampered by bad weather and repeated venue changes until Dr Cullen Park in county Carlow was decided upon.

In the end, Clonakilty completely overwhelmed their Sligo opponents and ran out comfortable 4-12 to 0-1 winners thanks to player-of-the-match Beulah McManus and a terrific team effort.

‘Oh my God, we had such phenomenal support for the All-Ireland final,’ Siobhán Daly recalled.

‘Our community was being dragged from pillar to post supporting all the men’s and ladies matches that year. To get the amount of support that we did was brilliant. The ladies football committee were brilliant to us in the build-up and in fairness to Rob and Denis, they had us so well prepared.

‘We were cool as cucumbers on the day. We got to keep the jerseys provided on All-Ireland day and I still have mine hung on the wall at home. There are a lot of red and green men’s and women’s jerseys still hanging in Clonakilty houses and all over the world from that year!

‘I will always remember Rob playing the Saw Doctors song ‘To Win Just Once’ on the bus to the final. I hadn’t paid much attention to the lyrics but “to win just once, that would be enough” were perfect.’

‘I remember it being bitterly cold and the weather was awful,’ McManus said.

‘Changing the venue for the final didn’t affect us at all. Maybe that was us being so young and naive, I’m not sure. We were just completely focused on winning thanks to Denis and Rob’s preparation. Travelling to Carlow as a squad and staying in a hotel the night before was a novelty alright. We had great craic though!

‘The game itself was anti-climactic because we thoroughly outplayed Drumcliffe-Rosses Point right from the opening whistle. It was a one-sided final and we knew after about 15 minutes that we were going to win it.

‘It was still an amazing day for the entire squad and the bus loads of supporters who made the long journey all the way up to Carlow. The homecoming back in Clonakilty was something I’ll never forget. What a year and what a team.’ 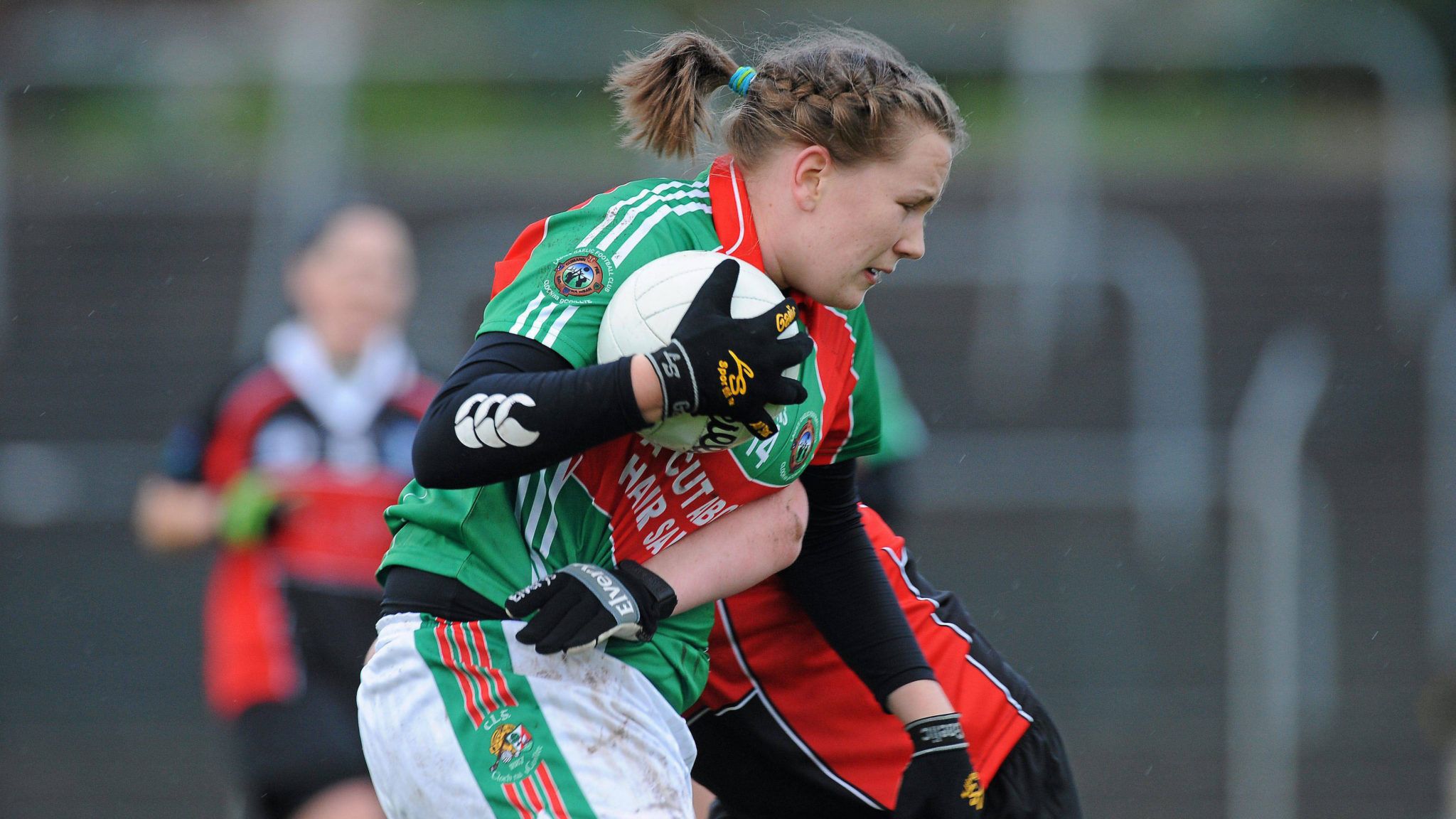 There is little doubt that this was the most talented Clonakilty ladies football squad to wear the red and green jersey. Martina O’Brien kept goal and would go on to achieve All-Ireland senior honours with Cork. A full-back line comprising of Clare O’Mahony, Carol-Anne O’Donovan and Susan Forristal gave little away and were ferocious tacklers.

In front of that trio stood an equally imposing half-back line made up of Beulah McManus (captain), Sinéad O’Neill (Cork minor) and Niamh Deasy. In midfield, the hard-working Clare and Áine O’Leary were the foundation Clonakilty built their championship triumphs on.

Half-forwards, Erica Jennings, Marie O’Donovan and Juanita Brennan weighed in with important scores throughout the year while Mary O’Donovan, Aoife Deasy and top scorer Sharon Whelton were the most potent full-forward line in the country.

By their own admission, the 2009 All-Ireland champions wouldn’t have won anything without the strength of their bench and being able to call upon another 15 quality players.

Clonakilty would add a county senior ladies football B title to the new Ahamilla trophy cabinet before the break up of that all-conquering squad.

Unfortunately, success in LGFA county senior competitions has been harder to come by since those heady days 11 years ago. Thankfully, in 2020, a thriving underage set-up means a new generation of Clonakilty footballers can dream of one day emulating Beulah McManus, Siobhán Daly and the club’s famous 2009 All-Ireland winning heroes.

To win just once, that would be enough.