BY the time John Cleary ventured outside the Cork dressing-room at Páirc Uí Rinn to chat to the gaggle of waiting media, most of the lights at the Ballintemple venue had been switched off.

The Cork boss stuck to that theme, nudging the spotlight off his side despite an early-season 12-point trimming of Kerry in their McGrath Cup Group A opener.

The Castlehaven man’s feet were firmly on the ground.

Yes, the Rebels went goal crazy against the All-Ireland champions, but context is important: this was a January 4th contest, under-cooked Kerry had just two training sessions done and a Cork team with a point to prove are further down the road in their preparation.

The home side’s starting 15 was impressively strong for this season opener. Ten of the Rebels that began last summer’s All-Ireland quarter-final loss to Dublin lined out, while the other five starters are no strangers either – returning defender Daniel O’Mahony, vice-captain Sean Meehan, Brian O’Driscoll back in Cork colours for first time since 2018, and the talented young duo of Conor Corbett and Chris Óg Jones. In contrast, Kerry started just three of their All-Ireland winning team.

The reason behind such a strong team for the first run-out of the year on the opening Wednesday night in January? Momentum, as Cleary targets the league that throws in at home to Meath at the end of the month.

‘Cork hasn’t had an awful lot of success over the years,’ the Cork boss pointed out.

‘You get success if you have confidence. You get confidence if you are winning games. If you go home beaten, you are always doubting and looking behind you and wondering what is going wrong. The day you win, there is more going right than wrong, and that is what happened tonight.

‘Definitely we wanted to hit the ground running this year. We went down to Kerry last year in the McGrath Cup final, they put out a full team and hammered us off the field. They built momentum from there. We are learning from that, and hopefully we might be able to do the same and build a bit of momentum over the next few weeks and see where it takes us.’

Cleary will be pleased that Cork raced out of the traps. The first half is more revealing than the second period that was punctured by 21 substitutions and lost its shape. Still, at one stage Cork led 5-10 to 0-7, as Kerry fans were calculating how fast the new Macroom bypass could help them escape back across the county bounds. 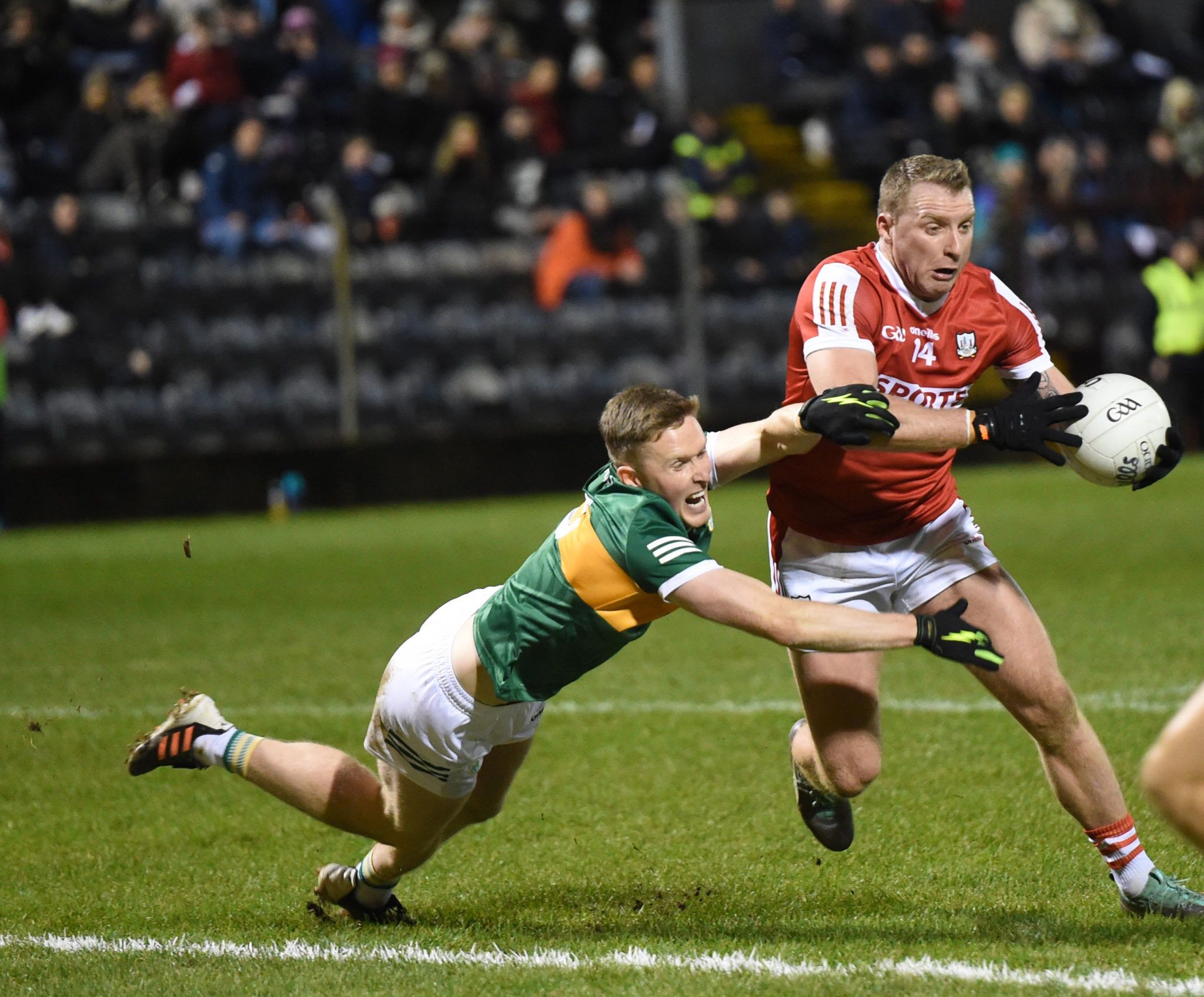 The opening first-half exchanges were somewhat misleading, considering what followed. Captain Brian Hurley rippled the Kerry net after just five minutes, scoring a rebound from a Sean Powter effort after the Douglas man morphed into the Road Runner and scorched a hole in the Kerry defence. Points from Kerry either side of the goal – Tony Brosnan (free), goalkeeper Shane Murphy (45) and Killian Spillane – left the rivals tied, 1-0 to 0-3, after 11 minutes. But energetic Cork hassled and harried Kerry, and outscored them by 2-7 to 0-3 in the remainder of the half.

By the time midfielder Colm O’Callaghan, set up by Ian Maguire, struck for Cork’s third goal in the 24th minute, to push the home side 3-3 to 0-4 clear, returning Tadhg MacCarthaigh clubman Brian O’Driscoll had chipped in with two points from wing forward. This was his first Cork appearance since 2018, a forgettable chastening by Tyrone that summer. Older and wiser, and coming off the back of a strong campaign with Carbery in 2022, O’Driscoll is keen to make his presence felt – and he set the tone against Kerry.

‘The reality is I am 28. Time waits for nobody. An inter-county player now goes to 32 or 33 before the body starts to slow down a little, but we are playing in the now and let’s see what happens,’ he said.

‘It was a long four years. I was aspiring to get back in with a little while and thankfully John has taken a chance with me. We’ll put the best foot forward and see how we get on. It’s early doors. It’s only January. Teams have little to nothing done so you can't read anything into this, but lads are just happy to get out there on the field to play.’

Dara Roche, with his second fine point, responded for Kerry. But the relentless Rebels hit back, with points from the free-scoring midfielder O’Callaghan (3), who brought his shooting boots to Páirc Uí Rinn, and Hurley. At the break Cork were full value for their 3-7 to 0-6 lead.

Kerry boss Jack O’Connor made seven half-time subs in the hope of shaking his team into life, but it was sharper Cork that maintained their first-half momentum. Brian O’Driscoll, set up by a Corbett pass, unleashed a thunderous drive for Cork’s fourth goal on 40 minutes. Top scorer O’Callaghan smashed home goal number five eight minutes later, and it was 5-10 to 0-7. Game over. Even though Kerry rallied, it mattered little, though there was still time for sub John O’Rourke, who got married on New Year’s Eve, to add the Rebels’ last point. Plenty of reasons for optimism, but no one will get carried away either. Truthfully, the result mattered little, but it has started the season on a winning note. Next up is Clare, who lost to Kerry last weekend, on Sunday in Kilmurry-lbrickane GAA Club in Quilty and a chance to build more momentum before the battles that matter.