CASTLEHAVEN ladies football club was ten years old in 2022 – and they marked that anniversary in style, with their adult team hitting the senior ranks after a fourth consecutive county title triumph.

There have been bumps along the road, but how a new LGFA start-up rose from nothing to become a senior club in less than a decade is startling.

That’s because year after year, at each grade in Cork LGFA’s ever-growing list of competitions, equally talented clubs fail to gain promotion.

Castlehaven LGFA are different. They have always been different.

Manager Dinny Cahalane has patrolled the side-lines since day one. He remembers the good old days as well as a couple of not so good ones, especially some of the club’s early outings.

‘We played St Peter’s in a league game back in 2015 even though we had very few players available at that time,’ Cahalane reminisced.

‘We ended up going down there with the bare 15 players as we had to fulfill the fixture. Tina (Browne), one of our selectors, was in goal that day.

Let’s just say we were well beaten and it was half 12 that night before we got back.

‘Another one was one of our first challenge games against Dohenys in Union Hall. We lost by 40 points. We got absolutely pulverised, physically, that day.

‘Those early days, everyone was asking what exactly have we gotten ourselves into here?

‘Look, we stuck at it. Everyone we got together came back to us. The commitment of the players has always been unreal. It was when we won our first junior D county title in 2017 that things changed.

‘After that, we said we can go places here. Again, it is down to the girls and the commitment they keep giving us.’

Castlehaven certainly went places after that initial success – Cork LGFA Junior C (2019), Junior B (2020), Junior A (2021) and intermediate (2022) titles during a glorious period in the club’s history.

Every club needs a talisman and someone to turn to when things aren’t going well. Joint-captain Siobhán Courtney is that Castlehaven player.

Right from the start, she has set the tone, on and off the pitch, for her club’s success.

‘Our goal was always to move up through the ranks but getting to senior in such a short space of time was a huge success,’ Courtney admitted.

‘I had only just moved home from Dubai and was used to the fine weather, warm conditions and the ball hopping properly in training while I was over there.

‘My first Castlehaven training session was at the end of January. Pre-season, a lot of sprinting and very different to what I’d been used to. Enjoyable all the same.

‘Games were ten minutes per half in Dubai because of the weather so my first 60-minute game for Castlehaven was a shock to the system! It has always been enjoyable putting on the Castlehaven jersey though and everyone is looking forward to next year.’ 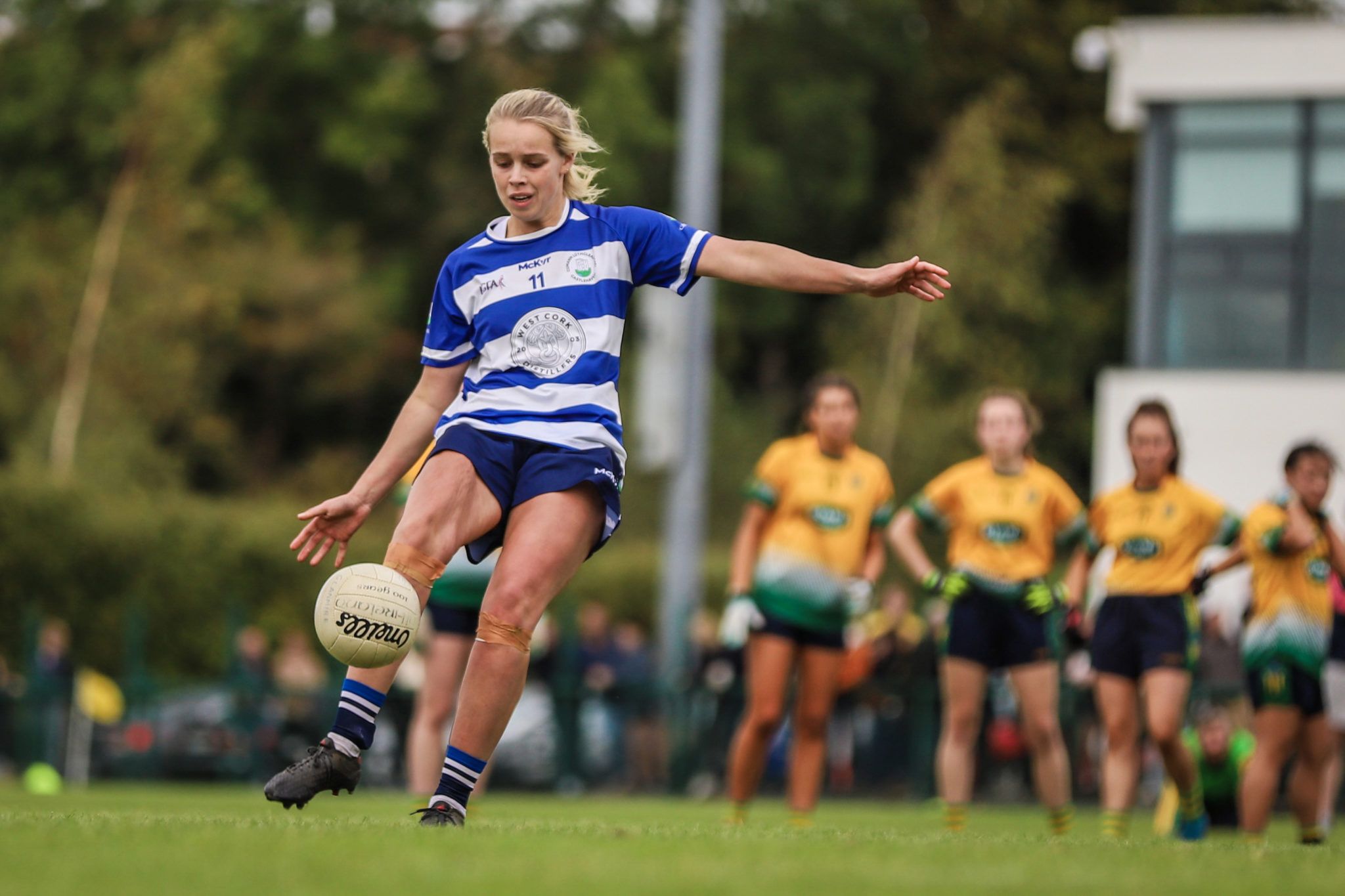 ‘We took a fair amount of hammerings that first year with Castlehaven,’ Whelton said.

‘I had moved back from Clann na nGael, and a lot of the other girls did the same when Castlehaven first started up. ‘At one stage we did question, “what are we after doing?”

Leaving successful clubs and starting from scratch again. Is this what things are going to be like? We were used to winning.

‘Ultimately, all we wanted to do was play for the blue and white.

To come back together and play with the girls you went to school and grew up with in the parish has made it all worthwhile.

‘I remember the first couple of training sessions in the back pitch which was new at the time. It was dark and there were no lights either. It was lashing rain too. Training is a lot more enjoyable nowadays!

‘Having that winning feeling makes training a lot easier but this group of players has grown together. Grown as friends as well as our relationships out on the pitch.’

It is one thing to develop a bond within a panel, quite another to sustain it. As Rachel Whelton alluded to, winning trophies makes training, matches and everything that bit easier.

Castlehaven’s senior squad’s hunger for success and strengthened friendships have not diminished even though the West Cork side has reached senior level.

‘Sometimes Finbarr Santry has to turn off the lights to get us off the pitch after training because so many of us are still chatting away’, Rachel Whelton laughed.

‘The bond and friendships we have are unbreakable. That’s so important when you are involved in tight games. We know how to motivate one another at this stage.

‘Winning has brought us together. Those nights out after you win, there is no beating them. There have been a fair few team bonding sessions during the years as well!’

Castlehaven have enjoyed plenty of nights out in recent times and deservedly so. Those aforementioned team bonding sessions elicited a rye smile from the club captain when asked to elaborate.

‘I don’t know, I must have missed all those team bonding sessions?,’ Siobhán Courney laughed. ‘I was probably training over at the pitch; I’m not sure what Rachel is talking about! I think everyone that’s been involved has enjoyed lining out and just kept on going.

‘Once we got a taste of success, it just drove us on. The one year we didn’t win a junior county was very important as we learned big lessons, learned a lot and moved forward. We now have younger players coming through the underage ranks who want to be part of our success. That is hugely important. Success breeds success.’

‘I will have to check on these team bonding sessions because management knew nothing about them!’ Dinny Cahalane laughed.

‘When we were beaten (by O’Donovan Rossa) in the 2018 county final, after a replay, we were hurt leaving Dunmanway that night. We never wanted to feel like that again. It was a case of a clean slate the following January, all down to the girls’ commitment, we have not looked back since.

‘Bringing in a new (coaching) voice like John McGuckin from Derry was hugely important too. Another massive thing for Castlehaven ladies football has been the unreal buy-in, since day one, from our GAA club.

‘As for next year, football has gone very tactical but if the girls keep putting the effort in during training, we will compete at senior level. We are not going there to make up the numbers so you never know’.