Castlehaven's Jack Cahalane lays off the ball before Jacob O'Driscoll, Valley Rovers, can get in a challenge during their Bon Secours Premier Senior Football Championship semi-final at Páirc Uí Chaoimh. (Photos: George Hatchell)

CASTLEHAVEN are building up a head of steam at the right time of the season.

Mark Collins’ first-half goal proved crucial as the Haven surged into another Premier SFC semi-final after they saw off Valley Rovers at a windswept Páirc Uí Chaoimh last Sunday.

This was a workmanlike rather than spectacular performance, but Castlehaven got the job done in this quarter-final.

Playing into the teeth of a gale wind and driving rain, Valley Rovers were well in the game and 0-6 to 0-4 behind in first-half injury-time. Then, a moment of magic from Brian Hurley. The Cork footballer produced a pin-point pass to release another inter-county star, Mark Collins, who coolly fired into the back of the net. Rovers changed ends five, rather than two, points behind.

A terrific restart yielded four unanswered scores and brought Valleys right back into contention. But the Brinny side would only muster two additional points however, as Castlehaven assumed control and scored eight more times to rubber-stamp a convincing seven-point victory.

‘A lot of it (loss) is because we ran out of legs halfway through the second half,’ Valley Rovers manager Paul Holland rued.

‘There was that initial burst after the half-time break where we kicked four points in a row. We were watching from the side-line and, almost at the same time, four or five of our fellas were in trouble with their legs. I think that was the biggest factor, to be honest.

‘Valley Rovers are a good team. We lost a county quarter-final last year by a point, a game we should have won. We beat Nemo this year. We lost to Douglas by a point having played poorly. Valley Rovers belong in the quarter-finals of the senior county. I feel sorry for the players as that was their eighth championship (football and hurling) game in nine weeks.’ 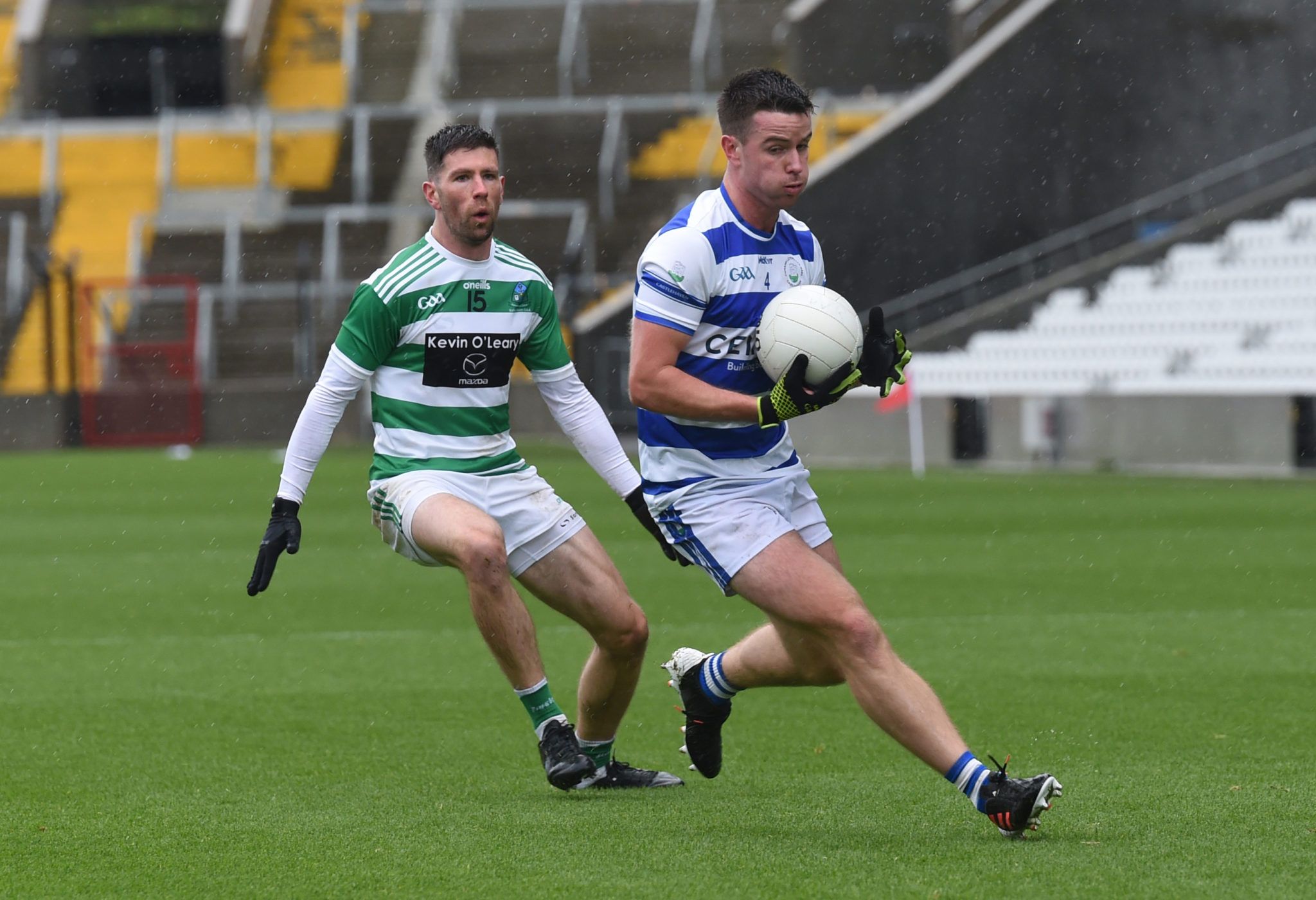 As for Castlehaven, this performance represented the best possible test ahead of facing St Finbarr’s in a heavyweight semi-final on November 14th. Brian Hurley and Mark Collins were to the fore but Michael Hurley, Conor O’Driscoll and Jamie Walsh plus an impressive defensive effort enabled the West Cork club gain a merited win.

‘A game like this will stand to us,’ Castlehaven manager James McCarthy surmised.

‘The more times our young lads play at Páirc Uí Chaoimh, the better. We were delighted to play here today and the pitch was immaculate. It helps good football and I think we played outstanding football in the second half.

‘One hundred percent, we had to alter our tactics when we saw the weather. We did not think it would be as bad as it was today. Even with a gale wind at your back, it is very hard to play with that as well as a massed defence. It was the same for Valleys. We changed our tactics again at half-time. Thank God, they worked.’

Rarely have weather conditions been as poor as last weekend’s quarter-final at Cork GAA HQ. Incessant rain and a gale wind made life difficult for both teams. Valley Rovers coped better against the wind during the opening half and were tied 0-3 apiece thanks to two Billy Crowley frees and a Fiachra Lynch effort after ten minutes.

Mark Collins edged Castlehaven back in front after the first water break prior to Conor O’Driscoll and Michael Hurley extending the Carbery club’s advantage. A superb Billy Crowley point preceded Brian Hurley and Mark Collins linking up to make it 1-6 to 0-4 at the interval.

That score was an undeniable body blow but Valleys responded magnificently. Billy Crowley (free), Jack Walsh, Barry O’Sullivan and Darragh Murphy hit four unanswered points during a five-minute spell to make it 1-6 to 0-8 immediately after the restart.

Castlehaven refused to panic and used all their experience to retake control. This was the West Cork club at their swashbuckling best. Backs to the wall and facing down a resurgent opponent, the Haven went to work. Brian Hurley (two), Michael Hurley and Jack Cahalane found their range and in the blink of an eye it was 1-11 to 0-9 at the second water break.

The weather remained as intolerable as ever but Castlehaven pressed on relentlessly. The final quarter may have been disjointed but Brian Hurley was at his best and would have had a hat-trick of goals but for Rovers goalkeeper Cormac Desmond’s heroics. Those missed opportunities mattered little as Robbie Minihane, Conor O’Driscoll and Hurley put the seal on a 1-14 to 0-10 victory.

‘I think we are a team longer on the road and more trusting our players,’ Haven boss James McCarthy said.

‘Maybe last year, we would have made changes but maybe we are a bit more steady on the sideline now as well. We trusted the players and it worked. We have a panel now and everybody has to be on their toes. Nobody’s place is safe.’