On the big stage: Bandon's Carmel Crowley will compete at the World Masters' Track and Field Championships in Lyon, France next week. 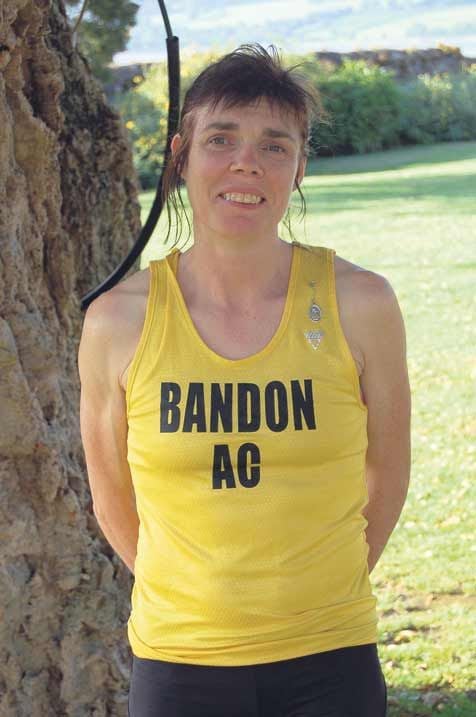 On the big stage: Bandon’s Carmel Crowley will compete at the World Masters’ Track and Field Championships in Lyon, France next week.

THERE can’t be many women athletes out there who can say they beat Sonia O’Sullivan during their schooldays and, if they met up again today, would in all probability be still ahead of the Olympic silver-medallist.

Bandon athlete Carmel Crowley heads off to the World Masters’ Track and Field Championships which commence in Lyon, France, on Tuesday next after a string of impressive performance on the local road circuit which bodes well for her forthcoming races against the world’s best in the F45 age category.

While the aforementioned Sonia is happy nowadays to run 10km under 40 minutes, Carmel has already this summer set a course record of 37:46 for that distance in Dunmanway, won the Courtmacsherry race in 39:11 and finished third overall of both sexes in the tough Ballinascarthy 10km in a time of 38:54.

‘I was kind of playing around with going and I suppose when I’m running well I said “it’s now or never”. Also France is close so it will be nice to try it,’ said Crowley of her decision to compete in the Lyon extravaganza which sees over 8,000 athletes from 98 countries taking part.

It all began for the young Carmel McCarthy, a farmer’s daughter from Tullyland (between Bandon and Ballindee), back in the 1980s when she was first introduced to athletics while attending Bandon Convent.

‘I ran the school sports when I was in second year and I came second to Fiona Begley who was a good runner at the time so they asked me to join Bandon Athletic Club,’ she recalls.

During that decade, she made rapid progress through the ranks and achieved success all the way to All-Ireland level with club, school and county. At the Five Nations Women’s International Cross-Country at Bexley in Kent on January 30th, 1985, she achieved one of her most memorable performances.

In a competition normally dominated by the English, the Irish intermediate girls’ team famously took the team award on a score of 16 points, eight ahead of England with the other three nations nowhere in sight.

In a very close finish, Wendy Wright of England took first in 15:02, Anita Philpott from Kanturk (who would go on to Providence College on scholarship) was second in 15:12 with Carmel McCarthy third in 15:15. Christine Lynch of Ireland finished fifth, one place ahead of the future Olympic medallist and world champion, Sonia O’Sullivan.

‘I was running all my school years from 13 to 18 but when I started work I gave up,’ says Carmel.

Marriage to Connie Crowley and the arrival of twins Gerard and Christopher (now aged 17) and Carina (15) then intervened until the year 2000.

‘It was Liam Fleming who asked me to come back to make up a team, and I’m at it since,’ she added.

On her return, the now 30-year-old soon showed that the talent hadn’t disappeared. She won the All-Ireland Novice Cross-Country and had a fair amount of success in open road races, including a course record of 27:51 for the Ballycotton five, which was only broken two years ago by Lizzie Lee of Leevale.

‘A couple of years after I came back, I was in line to qualify for the World Cross-Country but I got the ‘flu and I missed out although I did do the European Masters Cross-Country in Belgium a few years ago where I finished fifth over 40,’ she said.

In Lyon, Carmel will compete in two events, the 8km cross-country on Tuesday and the 5,000m on the track which is on Friday.

‘I changed my training around in that I’m doing a lot of speed work, which is hard. I train six days a week, all on my own, and was running between 50 and 55 miles a week in my build-up. I also do weights for a half-hour twice a week,’ she explained.

Working with Stock Health in Bandon for the past 20 years, Carmel fits in her training before work – often at 6am – and on Saturdays takes in a long run of around 13 miles from her home in Cregane.

‘It’s a busy life, we have a dairy farm at home so there’s no rest,’ she says.

And as she looks forward to her first taste of competition on the world stage, did she have any tinge of regret when following the career of her colleague, Sonia, from that schools’ team of three decades ago?

‘I was a home bird and I don’t think I would have gone through what Sonia went through. She was always a nice person and I was delighted to meet up with her last September when we did the 10-miler in Ballinspittle, we had a great chat.

‘She’s some woman, and she’s giving back all the time,’ concludes this remarkable athlete to which the same attributes equally could be applied.