Tim O'Donovan, chairman of the West Cork League, presents the trophy to Cathal Newman, captain of the Bunratty United team that defeated Togher Celtic B in the WCL Championship Cup final at Turner's Cross.

A quality encounter saw Evans score the final’s only goal after 77 minutes in a match dominated by the Schull outfit.

Togher Celtic B contributed much, were full of endeavour, defended superbly and never let up until the final whistle. But there could be no arguing with the outcome.

Since their relegation from the top tier, Bunratty has regrouped and begun utilising a wealth of talent emerging from their underage ranks. This is a club that has produced current Cork City defender Ronan Hurley and it was nice to see the League of Ireland defender congratulating his former team mates at full-time.

As for Togher, a young squad plying their trade a division below the Premier Division did exceptionally well to reach a cup final in their first-ever campaign. Compact and committed throughout the 90 minutes, Togher kept their shape and made Bunratty work for every opportunity.

The Bunratty United team celebrates after defeating Togher Celtic B in the WCL Championship Cup final at Turner's Cross.

‘It is a hugely significant result for Bunratty,’ commented Bunratty United manager Dan McSweeney minutes after his club lifted the cup.

‘We have fought well in the cup games, Beamish Cup included, during this reduced West Cork League season. So to come up here and win this trophy is huge for the lads. It will be a lifetime memory for a lot of them. I’m quite confident that with the squad we currently have that Bunratty United will be back in Turner’s Cross again.’

The on-pitch temperature read a sweltering 25 degrees despite an 11am kick-off. Sean Evans had the final’s first sight of goal, curling a free-kick towards the roof of the net only for Togher goalkeeper Ian O’Sullivan to palm the ball away to safety.

Eoin Kelleher was at the hub of all United’s best moments and prompted a succession of attacks with his intelligent use of the ball. Bunratty dominated possession and territory thanks to Kelleher, Cathal Newman, Lorcan O’Brien and Danny McSweeney’s combined abilities. But lack of a killer instinct in the final third coupled with committed Togher defending meant the score remained unchanged at the quarter-hour.

Sean Evans and Cathal Newman created half chances but a dominant Bunratty struggled to find a way past Celtic’s centre-back pairing of Eoin Murray and Conor O’Neill. Then, against the run of play, Togher could have grabbed the lead when Alan Brickley sprung United’s offside trap. Shane Bowen was alive to the danger and gathered Brickley’s chipped attempt after 16 minutes.

That effort caused an immediate response with Sean Evans arrowing another free-kick narrowly over the crossbar. The final’s first water break brought welcome respite and it was Togher who began to look menacing once play resumed. Aidan McCarthy, Garreth Crowley and Shane Crowley pushed further forward as their team enjoyed its best spell. 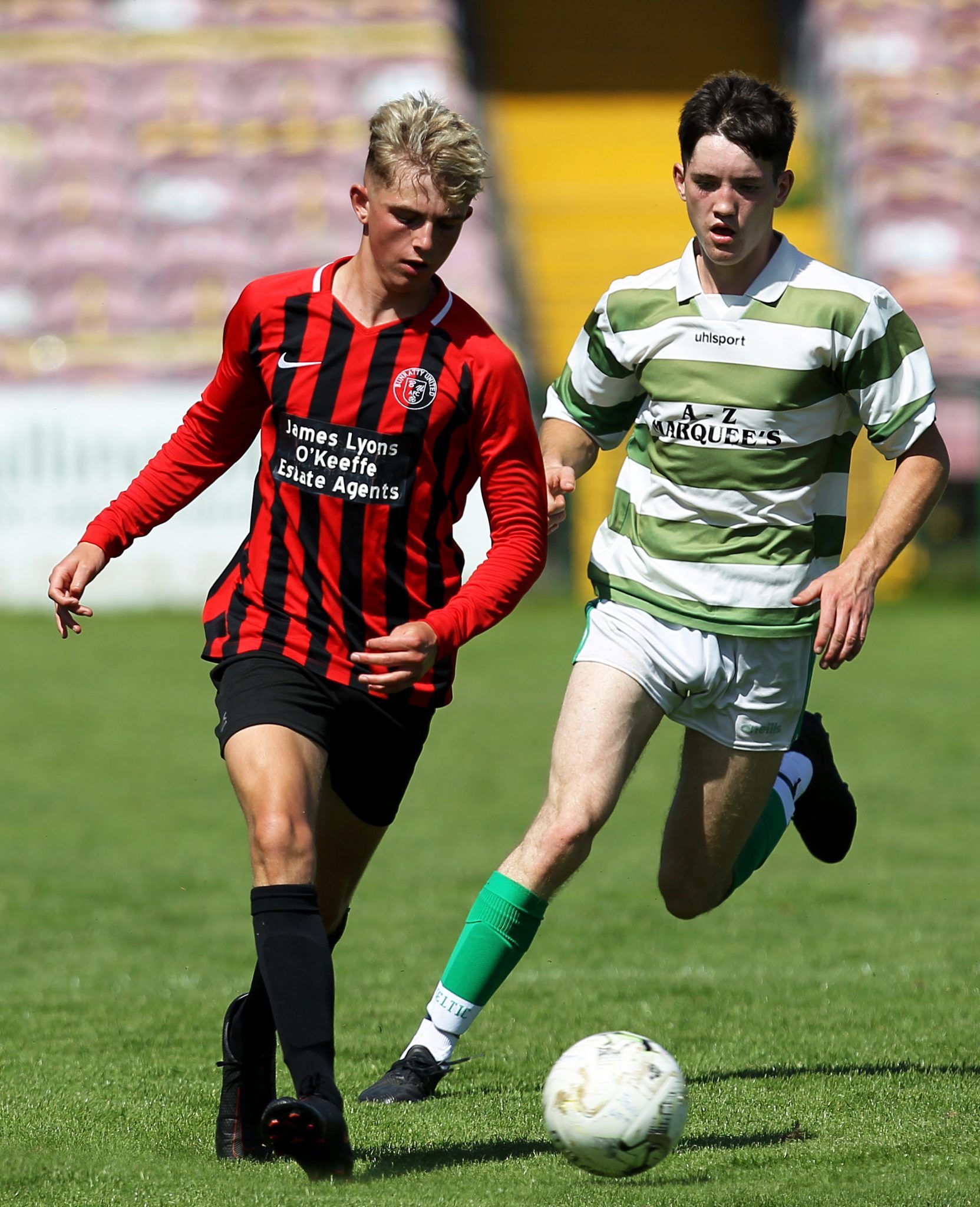 Celtic lost Alan Brickley to injury shortly before the interval but the experienced Johnny Collins came on and slotted in to midfield. Isaac Solomon was introduced for Bunratty and the Schull club came within a whisker of breaking the deadlock when Ian O’Sullivan finger-tipped an Evans shot behind for a corner three minutes after the restart.

Cathal Neman volleyed wide and Evans watched another effort drift past the target as Bunratty looked to capitalise on their possession. Credit to Togher for withstanding constant pressure during a lively third quarter in which Sean Evans once again broke through. Ian O’Sullivan produced a marvellous point-blank stop to prevent his team from falling behind.

Celtic threatened sporadically and were a threat on the counter-attack and set pieces thanks to Garreth Crowley’s graft. The Togher striker worked his socks off but too often was left isolated in the final third.

United continued to press and came within the width of a crossbar of opening the scoring with 19 minutes to go. A corner kick was allowed drift all the way into the Celtic penalty area and rebound off the crossbar before being hacked clear.

The Schull club was finally rewarded with a deserved goal after 77 minutes. Another incisive move ended with Sean Evans gathering possession inside the Celtic 18-yard box. Evans turned and sent a beautiful effort into the top corner. It was a terrific strike befitting the occasion.

Celtic poured forward hoping to snatch a late equaliser with Garreth Crowley curling a free-kick inches over the crossbar. There were a few tense moments late on but Bunratty United defended their lead and ran out deserving Championship Cup winners.