Last game: Cork's Damien Cahalane, pictured in action against Mayo in the All-Ireland football quarter-final at Croke Park, will line out with the Rebel hurlers only next season after deciding not to continue his dual role.

Cork footballers flattered to deceive after encouraging start to 2014 season 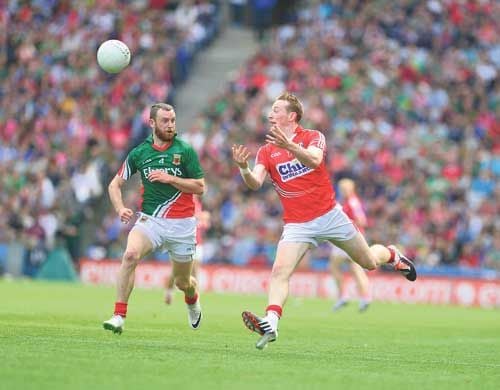 Last game: Cork’s Damien Cahalane, pictured in action against Mayo in the All-Ireland football quarter-final at Croke Park, will line out with the Rebel hurlers only next season after deciding not to continue his dual role.

NOBODY was quite sure what to expect from the Cork footballers at the start of the year.

Hit by a raft of retirements from last year’s squad, and the loss of Ciarán Sheehan to Aussie Rules football, it was felt they might struggle in the league under a new management headed by Brian Cuthbert, who made it clear from the outset that his priority was to develop the squad before the championship.

It meant that player rotation was going to be the order of the day over the course of the league, with Cuthbert expressing the hope that Cork would be able to preserve their Division 1 status during the auditioning process.

They did more than that, and, indeed, they became the story of the spring campaign after the refreshing brand of all-out attacking football that Cuthbert was eager to implement enabled them to top the table in Division 1.

It seemed as if their stock was about to rise even further after they ran Dublin ragged for the best part of 40 minutes in the league semi-final at Croke Park before the game underwent a remarkable transformation and the Dubs came from ten points behind to run out winners by seven.

It amounted to a harsh reality check, making it abundantly clear that Cork’s new strategy needed to be tweaked quite a bit defensively and that the team was still very much a work-in-progress.

It was always going to be rigorously tested in the championship, and it malfunctioned in the Munster semi-final against Tipperary as Cork struggled to cope when faced with a massed defence for the first time in the season.

They were extremely fortunate to get over Tipp (0-16 to 1-11), who blew their chance of causing an upset with erratic shooting, and the complete melt-down of the system in the Munster final against Kerry (0-24 to 0-12) brought it forcibly home to the management that persisting with a cavalier approach was no longer an option.

They radically revised the game-plan for the qualifier against Sligo (0-21 to 1-11), using their two wing forwards as sweepers in front of the full-back line, and getting bodies behind the ball in numbers when the opposition had possession.

It was always going to work against hapless Sligo, and it was effective again in the first half of the All-Ireland quarter-final against Mayo.

Once Mayo got to grips with it, however, Cork appeared to be facing humiliation comparable to that which they had endured against Kerry.

With the game rapidly slipping away from them, Cork had no choice but to come out of their defensive shell, and, ironically, their reversion to the defence-orientated system that had been discarded after the Munster final almost carried them to victory, losing 1-19 to 2-15.

Their stirring comeback in the last 20 minutes salvaged Cork’s pride and put a different complexion on how their season is likely to be viewed, as they would probably have been condemned as a team going nowhere fast only for it.

Now, they might be seen as a side that, having blooded a host of rookies over the course of the championship, could soon develop into the complete package after getting within a whisker of flooring Mayo.

Brian Cuthbert is certainly hopeful that progress can be made in 2015, and he says he was reasonably encouraged by what transpired during the past 12 months overall.

‘I suppose it could be described as a topsy-turvy year, but that was always likely to be the case when you have a new management and a lot of new players,’ Cuthbert said.

‘The league went very well, we topped Division 1, but to lose such a big lead in the semi-final against Dublin put a big dent in us, and we were very poor in the championship against Tipperary.

‘We didn’t perform at all in the Munster final against Kerry, but we rolled up our socks again after that, and I thought we could have beaten Mayo in the All-Ireland quarter-final.

‘We obviously had to change our style of play after the Munster championship, and I thought it served us quite well against Mayo, except that we turned over a bit of ball and gave away a few soft scores just after half time.

‘It left us chasing the game, so we had to change our approach again, and we were a bit unlucky not to pull back the lead, because we just ran out of time in the end.’

Cuthbert agreed that the dual-player situation militated against the footballers’ ambitions this year, making the point that the three players in question came in for just two training sessions prior to the Tipperary game.

‘We had them for a week and a half before the Kerry game, but then they went back to the hurlers, and they were with us for just five days before the qualifier against Sligo,’ Cuthbert explained.

‘All in all, it made things very difficult, and it was obvious the dual-player situation needed to be reassessed, although it’s disappointing from our point of view that Aidan Walsh and Damien Cahalane opted to go with the hurlers next year.

‘I wish them the best of luck, but, on the plus side, Eoin Cadogan has decided to concentrate on football, and I think we’ll see him going better next year because of that,’ suggested the Bishopstown man.

While insisting it wasn’t a bad season for Cork, Cuthbert accepts they are going to have to produce a bit more in order to be in with a chance of winning the All-Ireland in 2015.

‘It’s going to be very difficult, and you’d definitely have to say there are three or four teams rated above us in the pecking-order at the moment,’ the Cork boss said,

‘At the same time, we lost by one point to Mayo, who went to extra-time against All-Ireland winners Kerry, and if you took away the slump in the last 20 minutes of the league semi-final against Dublin and the extremely disappointing display in the Munster final, I think we had a reasonably good season otherwise.

‘I expect everybody in our group would have learned a huge amount from it, and we’ll be trying to put that knowledge into practice going forward.

‘It’s going to be all about learning from the mistakes we made over the past 12 months, and if we manage that, and I’m sure we will, I feel we’ll be in with as good a chance as anybody of doing well in 2015.’