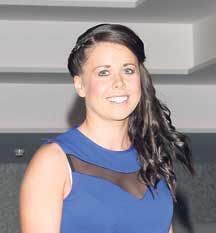 BALLINHASSIG’S Eimear O’Sullivan could miss the rest of the All-Ireland senior camogie championship with a knee ligament injury, according to manager Paudie Murray.

The All-Ireland winning defender suffered a freak accident in training four days before Cork’s opening championship Group 1 game against Galway, and while O’Sullivan did play in the subsequent win against Limerick, a scan after revealed she has damaged ligaments.

On the plus side Julia White is back in Cork colours, after a period of travelling, and made her first appearance of the season in the 0-13 to 0-6 victory over a youthful Offaly in Páirc Uí Rinn last weekend – a result that sees Cork with two wins from three games ahead of Saturday’s final group game at home to Wexford.

Orla Cotter continued her assault on the scoring charts with another nine points in difficult conditions. Briege Corkery added two points, with Orla Cronin and Julia White were also on the mark.

League champions Galway top Group 1 with a 100 per cent record from their three games, while Wexford and Cork are next up on four points apiece. The winner of Saturday’s game between Cork and Wexford will decide who finishes second and third ahead of the All-Ireland quarter-finals against teams from Group 2.

Ahead of the Model County test, Murray wants his team to be more clinical.

‘We trained on Monday night and we watched a video of the game and we realise that we need to be more clinical in front of goal. Our defence has stood up quite well, but we need to get more scores on the board.’