Trainer James Dullea at his stables in Killountain, Bandon with Rocky’s Silver.

IT HAS been a case of sustainable growth for racehorse trainer James Dullea since he first ventured out on his own more than 12 years ago.

The Bandon native had his most recent winner with Castlegrange in Thurles over a fortnight ago and he is hopeful that a first foray into flat racing this summer can help to continue the upward curve.

Having been in the industry for about two decades in total – he was groom to Newmill when the horse won the Queen Mother Champion Chase at Cheltenham in 2006 – taking out a trainer’s licence was always an ambition.

‘It was something always in the back of my mind,’ he says.

‘I started off, the same as anybody does in the game, as a groom and progressed on to being an amateur rider.

‘I rode in a few point-to-points and a few races on the track as an amateur – to no huge success – and training was always on my radar.’

Spells in the yards of John Murphy, Conor Murphy, Robert Tyner, Eugene O’Sullivan and Jessica Harrington helped Dullea to pick up a wide variety of expertise. 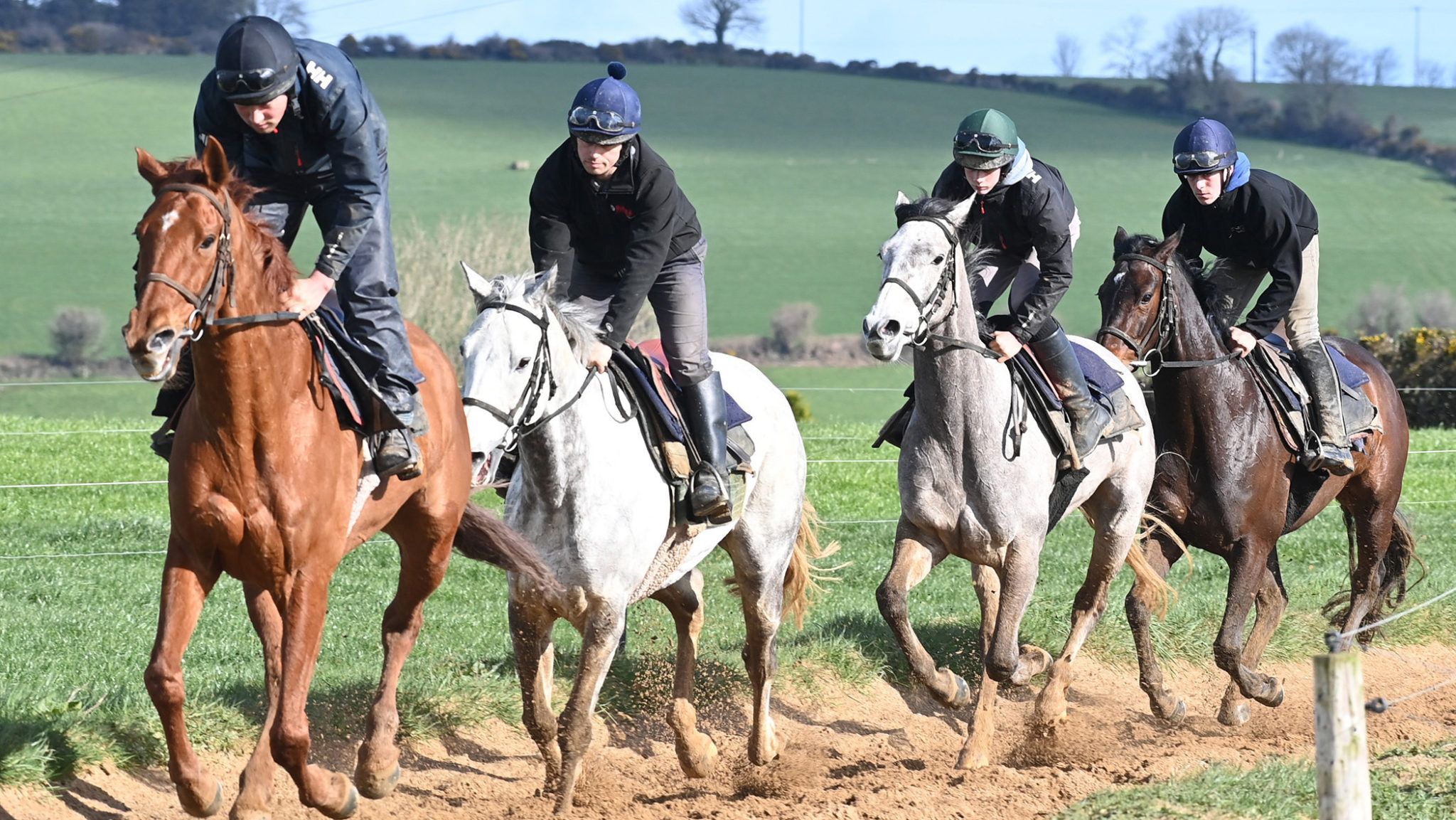 Some of the James Dullea trained horses out on the gallops at Killountain, Bandon.

‘Every racing yard has their own system and their own way of doing it. That was one of things, I wanted to see how different yards did it, to come up with our own system here eventually.’

Even with all of the knowledge acquired, was it a tough decision?

‘It was an awful scary decision to make!’ Dullea laughs.

‘It was 2008 I went out on my own, in the worst of the downturn. Financially, it didn’t make an awful lot of sense, but I had my heart and mind and set on it. We bit the bullet and took the jump. We started with point-to-pointers first and built it from there, learned our way and felt our way.

‘We had our first winner for my uncle Batty Butler with Mayo Calling and it went from there. With nearly every winner we got, we got another horse to train. It was slow, but you were making progress.

‘It took time and we’re still building but it was that first win that set it all going.’

His workforce has grown too, albeit remaining tightly-knit.

‘I had one starting off and there’s six there now, between part-time and full-time,’ he says.

‘It’s all about the team in racing – if you don’t have a good staff, you’re at nothing. You need a good team and we’ve a great team, experienced lads that have been in the game plenty. It’s probably one of the upsides to being where we are – we’ve had different lads from West Cork that want to be involved in the racing industry and don’t want to move up the country and it’s easier for them to work here than having to up sticks.’ 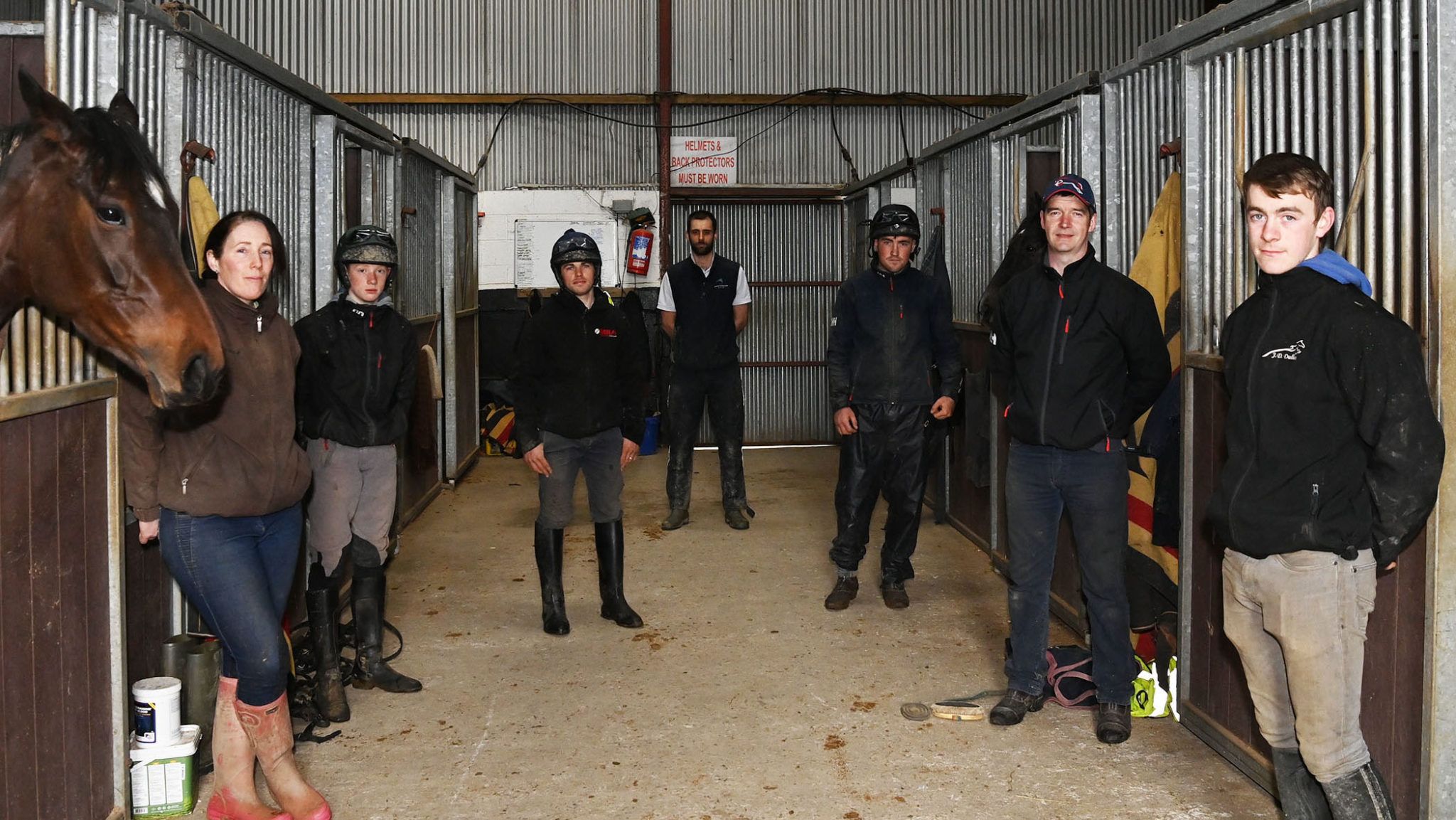 Building up the yard in a physical sense has also been a case of incremental progress. Based at the farm of his parents James Sr and Anne just outside Bandon, he was lucky to have a starting-point but it was still a case of starting from scratch.

‘When I started off, there were no stables here and we had to build them,’ he says.

‘At the same time, there was a yard there and a shed. We were luckier than a lot of other people who had to go out and buy ground to keep going. We were very lucky from that point of view. We progressed it from there, with the horse-walker and the gallops and that sort of thing. We’re still building and improving facilities, or trying to anyway. You’re trying to get a better class of a horse into the yard to try to climb the ladder. It’s ultra-competitive.’

‘Wintertime, we would tend to be racing two or three days a week, on average, and you’re taking horses away from home to work on other days, for schooling and that kind of thing. It can be fairly full-on.

‘Wintertime is busier as we tend to have more winter horses than summer horses, though we’re hoping to have a few for the flat season this summer, which would be a first for us.

‘It was something that we always wanted to do and the opportunity presented itself there at Christmastime. We were sent a few for the flat, so that’s a new challenge and we’re looking forward to it.

‘The fundamentals are the same. My colleagues tell me that training a flat horse is a bit easier as you don’t have to teach them how to jump and you don’t have to be as hard on them physically, fitness-wise. I wouldn’t think there are any huge differences, though.’

A trainer can sometimes have to engage diplomatically with owners who feel that their horse is destined for greatness, but by and large, Dullea is dealing with realists.

‘By and large, people are realistic,’ he says, ‘but you will have the odd one that you have to gently explain things to.

‘We’re in a business where you’ve so many different characters, a really broad spectrum of people. Most of them are realistic, they learn fairly fast anyway. When we get an idea of where a horse’s ability is, we’ll explain to them and from there they can start readjusting their dreams, or buy better horses!’

At the moment, of course, the owners aren’t present on track as racing, like everything else, continues to deal with Covid-19. From a practical point of view, a trainer’s life isn’t altered too much, though.

‘There’s no difference in workload, as such,’ Dullea says.

‘You just have to be a lot more conscious of the Covid regulations. We have a bit work to do as regards registering and all of that for the races, compared to before. The owners being missing from the track is the big thing but, as regards the workload, it hasn’t changed much.’

What remains the same is the quest for improvement. The James Dullea Racing Club allows would-be owners to invest a manageable sum for a share in two horses, Satin Sun and Moscowsowhat, and it’s a case of trying to make those marginal gains. ‘We have the racing club and that’s going well,’ he says.

‘They’ve had a winner with one horse and the other one has been placed a couple of times, hopefully only waiting to win.

‘The long-term is to try to keep improving and climb the ladder a bit more, get better horses into the yard and aim at the some of the higher races. We’re like every yard in the country, just trying to do our best with what we have and train every horse to the best of its ability and try to get winners.’