Ballydehob man Danno O’Mahony is an icon in the world of professional wrestling.

THE history of professional wrestling is defined by its superstars and its eras.

The hugely successful 1980s were fronted by Hulk Hogan.

Stone Cold Steve Austin and Dwayne ‘The Rock’ Johnson starred during the late 90s and early 2000s, bringing unprecedented levels of popularity to the oft-maligned art-form.

Before Hogan, Austin and The Rock however, it was a humble West Cork man who spearheaded the business.

‘He was the first true ethnic super-draw.’

Those are the words of wrestling historian and journalist Dave Meltzer of the Wrestling Observer Newsletter who guested on the Star Sport Podcast this week to reflect on the career of Ballydehob-man Danno O’Mahony.

O’Mahony, who will be 70 years dead this November, will be known to most in West Cork for the statue erected in his honour in his home village.

Anyone who has visited Ballydehob, or even passed through on their way to Schull or Goleen, will have seen the imposing bronze statue created by the late sculptor James MacCarthy.

What many won’t realise, is just how big an impact he had on the world of American professional wrestling in the 1930s.

‘He was like a meteor,’ Meltzer says of Danno’s entry to the business.

‘He was big and had a good look. He was promoted very heavily as the strongest man in the world.’

You don’t have to look twice at a photo of Danno to realise just why he was plucked from relative obscurity for a career inside the squared circle.

Soon after starting out, Danno was regarded as the ’top guy’ in the business.

Born in Ballydehob in 1912 to Daniel and Susan, O’Mahony had little or no experience in wrestling prior to his introduction to the North American scene by promoter Paul Bowzer.

Within two years he was selling out Fenway Park, home of the Boston Red Sox, opposite Greek-American legend Jim Londos.

‘He was an incredible drawing card. Like nothing they’d ever seen,’ Meltzer says.

‘His big championship matches would be moved to baseball stadiums because he would sell out the Boston Garden (currently home to the Boston Celtics of the NBA) too easily.

‘He drew the biggest crowds in the history of American professional wrestling up to that point and time.

‘For his day, he was tall, he had a good body and he was a good looking guy. To draw crowds like that he would have had to have had a certain type of charisma.’

From humble beginnings at the family farm in Dereenlomane, Danno quickly became a household name, especially in territories with large Irish communities like Boston and New York.

Danno’s ability to draw big crowds at a time when populations were lower and transportation was less accessible, puts him on at least an equal footing with the likes of the aforementioned Hulk Hogan in terms of historical significance, according to Meltzer.

‘He was a gigantic celebrity (in Boston). He would have been bigger than the biggest baseball players. My perception would be that he would be at the Hogan and Rock level as far as like a real superstar,’ Meltzer says.

In June of 1935, aged just 22, O’Mahony was crowned World Champion for the first time, beating Londos in front of 25,000 adoring fans at Fenway Park.

People may baulk at the idea of a ‘world champion’ in a sport with pre-determined results but within wrestling it is the ultimate accolade. It’s recognition of your drawing power and popularity.

‘At the time he was the youngest world champion ever and to this day he is the second youngest behind Lou Thesz.’

The best was yet to come though and in July 1935, in front of 45,000 supporters at Braves Field in Boston, Danno would outlast Ed George to become the unified World Heavyweight Champion.

Danno’s time as champion, and as the biggest star in the sport, was short-lived however.

A double-cross by German performer Dick Shikat at a sold out Madison Square Garden in Manhattan in March of 1936 was a major turning point.

In July of that year he returned to Ireland and home to Ballydehob.

British Pathé footage (which is available to watch on Youtube) from the time shows the thousands of jubilant fans that welcomed him back to Cobh.

For the last mile on his journey, as he approached Ballydehob, he was escorted by 30 men on horseback, further adding to the pomp and circumstance.

The only homecoming that even remotely compares were the bonfires that welcomed Gary and Paul O’Donovan back to Lisheen with their Olympic silver medals in 2016.

Danno’s star dwindled slightly thereafter and following a stint in the army during World War II and a spell as a publican in Santa Monica, he returned home for good in 1950.

Six weeks later he would die in a tragic car accident aged just 38.

Though brief, Danno’s wrestling career left quite a mark.

‘Long-term I would say his two legacies would be the Irish Whip and his position has the first ethnic super-draw,’ Meltzer says.

The Irish Whip, O’Mahony’s signature move, is still in use the world over and still carries the same name – in tribute to the man from Dereenlomane. 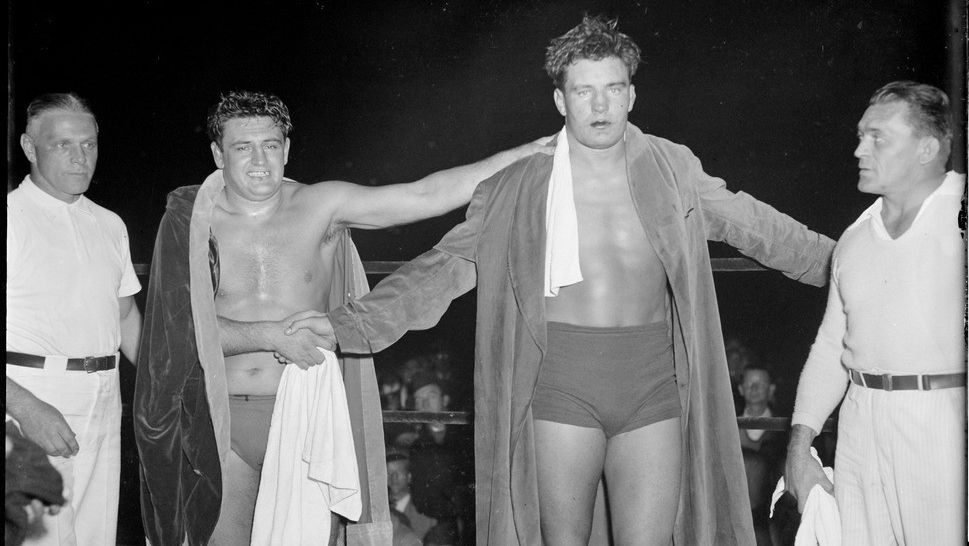 Smoke and mirrors play a big part in professional wrestling and although one might be cynical about the claims that Danno was in fact the ‘world’s strongest man’, his credentials as a genuine strongman cannot be questioned.

A snippet from History Ireland in 1998 references Danno’s win at the Cork County Throwing Championships in Macroom in 1933.

Aged 20, Danno came out on top in the ‘56lb Between the Legs’ competition. His brother Flor finished second.

Legend also has it that at the age of eight he carried a half sack of corn up the steps to the barn and at eighteen he laid out a bull by kicking him in the jaw.

One has to wonder what impact he might have made on the football fields of West Cork had he not pursued the wrestling.

If he could lay out a fully grown bull with a solitary kick, you’d have to assume he’d have made light work of the 45s.

And I can only imagine the collective sigh of relief from the region’s road bowlers when Danno boarded the SS Bremen in Southampton and set sail for New York.