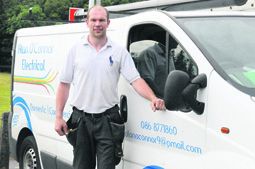 Busy times: Cork footballer Alan O’Connor, who has gone out of his own as an electrician, has his hands full between work and GAA at the moment. (Photo: Tony McElhinney)

IT wasn’t a phone call he was expecting.

It was moving towards the tail end of April and Alan O’Connor had his hands full as it was.

After almost 13 years working with John McCarthy Electrical in Bantry, O’Connor felt the time was right to strike out on his own as an electrician. And he has.

Then, one evening, the phone rang. It was Cork senior football selector Owen Sexton, Kilbrittain, on the other end. Cork wanted their former All-Ireland winning midfielder back. O’Connor was, to borrow his own word, surprised.

‘I didn’t see it coming,’ the recently turned 30-year-old explained.

‘I told Owen “look, being honest, at the moment I have no plans on going back”, because I was happy with where I was. He gave me a week to think about it, which I did. Honestly, I was between two minds. It was a hard call, especially because of the commitment.’

Those same demands – that long drive from home in Kealkill, 12 miles outside Bantry, to training in the city, for example – were the reasons why he packed his bags and left the inter-county scene in November 2013.

When he retired that winter, the St Colum’s man spoke of the huge demands inter-county football put on him, that he was ‘burning himself out’, his ‘body didn’t have time to recover’, and it ‘wasn’t good’ for him or his young family.

That’s why O’Connor took his time, weighed up the pros and the cons, before giving Sexton, and Cork football, the answer they wanted: count me in.

‘I did miss the buzz of playing games above in Croke Park and down in Killarney, and after talking it through, and that I’m only 30 this year, I said I’d give it a go. There are only a few months left in the year, my fitness was good, so I jumped back in.’

Key in O’Connor’s comeback decision was his career move to go out on his own as an electrician – Alan O’Connor Electrical. It has given him even more flexibility.

‘I am my own boss now so if I need to take a rest or head off early, I can do it,’ he explained.

‘You’d be nervous enough about starting off on your own because you are going from a steady wage to a more unpredictable set-up. It’s a different challenge. But it’s exciting.

On that scale, Cork football would rank as a big job, given Sunday’s impending Munster SFC final against All-Ireland and provincial champions Kerry at Fitzgerald Stadium (where Cork senior footballers haven’t won a championship game since 1995), plus taking into account some of the Rebels’ recent hammerings in the last 18 months.

O’Connor was on the outside looking in when Dublin, twice, (2015 league final and 2014 league semi-final) and Kerry (2014 Munster final) taught Cork football lessons.

It was the week after Cork’s Division 1 league final loss (1-21 to 2-7) to Dublin at the end of April when O’Connor linked back up with the inter-county set-up, 17 months after retiring.

Seven weeks later, he played 53 minutes in the Cork midfield in the 1-20 to 1-8 Munster SFC semi-final win against Clare at Páirc Uí Rinn, and he generally impressed in his first inter-county game since the 2013 All-Ireland quarter-final loss to Dublin in Croke Park.

A source of frustration, however, was the lack of long kick-outs, as O’Connor explains: ‘the Clare goalkeeper was kicking a lot of his kick-outs short. It’s frustrating that the ball isn’t going long so you can contest it. The game has changed. It’s not man for man anymore.’

Interestingly, between the Dublin defeat two summers ago and the Clare win two weeks back, the Carbery midfielder didn’t go to any Cork game. He didn’t watch Cork in the flesh. His retirement was a clean break; the chord was cut.

‘I stayed away from it. Maybe I thought if I went, I’d end up being a critic or maybe that I’d get that want to go back in, so I kept a safe distance and watched what I could on television,’ he explained.

He also enjoyed his time out of the inter-county spotlight. Spending quality time with his wife Lorraine and two young girls Rebecca (3), Emma (2); getting the chance to spend more time with family and friends, and fully committed to St Colum’s with no distractions, O’Connor was content.

‘I was glad of the break. The pressure of maintaining that level of fitness and being up to standard can be hard, but after I retired I was able to focus on my family and myself. It was easy on the mind as well,’ he said.

That’s been turned on its head now as he’s back in Rebel red, and he admits there’s a certain element of ‘this is it’ about his U-turn.

‘I have nothing to lose. When I went back I said I’d put the head down and work hard. If I made the panel I would have been delighted. If I made the team even better again,’ O’Connor said.

‘I wouldn’t be a man for too many words so I’ll do my own thing – if I make it I make it. If not, then at least I tried.

‘Is this my last hurrah? I’m 30 now. There’s not too many fellas playing inter-county football over their 30s now so I’ll give it what I can when I can.’

His former teammate Nicholas Murphy gave O’Connor a huge endorsement when the news broke of his return, five days before the league final loss.

‘I remember at the height of it Alan bursting a gut in training, setting the tempo, and it gave everyone else a lift because he set the bar for effort and work rate. His return will be a massive boost to the set up,’ the Carrigaline man said.

Murphy also recalled the 2013 Munster SFC final in Killarney when O’Connor was brought on as a late first-half substitute at a time when Cork were flagging badly, down 1-10 to 0-6. The St Colum’s powerhouse dragged Cork back into the game, dominating the middle third, before ultimately they fell short (1-16 to 0-17) – it’s a reminder of what O’Connor can bring.

Modest in reflection, he feels his ‘fresh pair of lungs’ was the difference that day, but he admits Cork need a lot more if they are to overturn Kerry in their own backyard this Sunday, especially considering what happened in last year’s provincial final in Páirc Uí Chaoimh, the muted goodbye to that arena.

‘Lads were disappointed with last year. So were the fans. It was a bad day. It’s only natural that you want to make up for it. Nothing can be done to change last year. Now it’s about proving ourselves this year,’ he said.

This Cork team does have to prove itself after some high-profile defeats in the last 18 months since Brian Cuthbert took over, with the critics lining up to have a pop off the Rebels – Joe Brolly and Tomás Ó Se spring to mind.

‘We only focus on ourselves and we don’t think about the doubters or try to prove them wrong,’ O’Connor stated.

‘In my time before there were a lot of pundits who said a lot of things about Cork, that this team will never win anything, but like before, and I would say it’s the same now, fellas don’t give a sh*t about what’s being said and written about them – what matters is focussing on the panel and the next game.’

Cork may be behind the top four of Kerry, Dublin, Donegal and Mayo, but O’Connor isn’t making all these sacrifices again just to make up the numbers.

He has seen positives since he returned, new leaders in the dressing-room, young fellas who want to make their mark and a team that wants to improve.

With the drive, physicality and work-rate of O’Connor back, this electrician could provide the spark the Cork engine-room had been missing.