WITH two kids under six, we have adopted a fairly liberal policy when it comes to sharing the bed with the offspring during the night.

There are thousands of books telling you never to do this, of course, along with millions of further tips on being the perfect parents but the longer you spend at the gig, the more you realise most of these clowns know as little as you do and ‘sure, they’re only small once’.

And so it was, at 5am last Friday morning, with my three-year-old daughter sprawled across the middle of the bed and me clinging onto the edge like Robinson Crusoe attached to a whiskey barrel, that my thoughts turned to the plight of the DUP.

They, too, must feel like they are clinging on for dear life these days, with the tectonic plates of geopolitics moving fast beneath them.

First, they backed the Torys on a Brexit strategy that has since been turned back against them. The border in the Irish Sea that could easily have been avoided had they not stabbed Theresa May in the back is now a reality.

That they then orchestrated the removal of Arlene Foster without any plan on what to do afterwards, was careless to say the least. When Edwin Poots quit last Thursday night because colleagues revolted over a deal that Sinn Féin and the British government had done about Irish language legislation, it was starting to look embarrassing.

And now Jeffrey Donaldson has returned from Westminster to inherit the throne this week.

Who knows, you could see a challenge in the months ahead yet from Sammy Wilson or Van Morrison, or maybe the wreck of the Titanic.

And so, the next fortnight could be the most fraught since the Brexit vote.

There is the potential that the DUP will ditch power sharing entirely and trigger an election, should concessions on the Irish Language Act or the Northern Irish Protocol not be forthcoming.

This would be a massive gamble for the DUP, who are already lagging in the polls. With marching season approaching and the results of a census likely to indicate a Catholic majority for the first time in Northern Ireland’s history, some very rocky road lies ahead.

PARTY coups weren’t restricted to the DUP last weekend. There was much surprise at the Fine Gael Ard Fheis when party leader Leo Varadkar, best known for getting up early in the mornings, was dramatically replaced by a little-known newcomer in the form of Chairman Leo the great socialist, promising all things to all men, including 40,000 new homes a year, increased pay and working conditions for those on the frontline and 4 billion extra a year for the HSE post-Covid.

Such an assortment of sweets and goodies have not been put on display for the electorate to drool over since the heyday of Bertie Ahern. Such an enlargement of the state would be enough to make even Richard Boyd Barrett shake in his workboots.

Perhaps spurred on by Boris Johnson’s ‘leveling up’ and capture of the red wall in Northern England, Chairman Leo believes Sinn Féin, and indeed Fianna Fáil, can be outflanked where they least expect it, on the left.

Of course, there is no sense yet of how we might pay for all this. Personal tax cuts are also on the list of Fine Gael promises.

There are potentially huge bills in the pipeline including a redress scheme for mica and a compensation scheme for the women who spent time in the mother and baby homes. Presumably Paschal Donohoe, famous for his prudence, has been abducted by aliens or sent to a Center Parcs-style gulag in Longford?

If anything, it’s further proof that left-right norms in European politics are rendered meaningless in Ireland, where the socialists don’t want to tax property and the capitalists want an even bigger state. You’d be wrecked from it.

Into the thin (grey) line of jabbing duty

I MADE the most unusual trip to Croke Park last Thursday morning.

Instead of donning the red and white headband for a few pre-match pints with my old schoolmate Fachtna, I hopped on my bike and merrily nipped down to join the vaccination queue.

There in that hallowed stadium, I was injected with some messenger RNA developed by Pfizer which is currently instructing my body to create antibodies that will protect me against a virus that didn’t even exist two years ago.

What an amazing thing indeed.

While I have to applaud the scientists and the HSE for such a successful rollout, I do need to draw attention to an error in the process.

When I saw the lines of old people patiently awaiting their turn -— greying aul divils looking worse for wear after a year of eating their own sourdough, women with dodgy-looking knees and flabby lads in Metallica t-shirts  -—  it became clear to me that there must have been some terrible mistake.

Was I included in the wrong cohort?

I mean, sure there’s no way I could possibly be the same age as these people, is there? Is there?!! 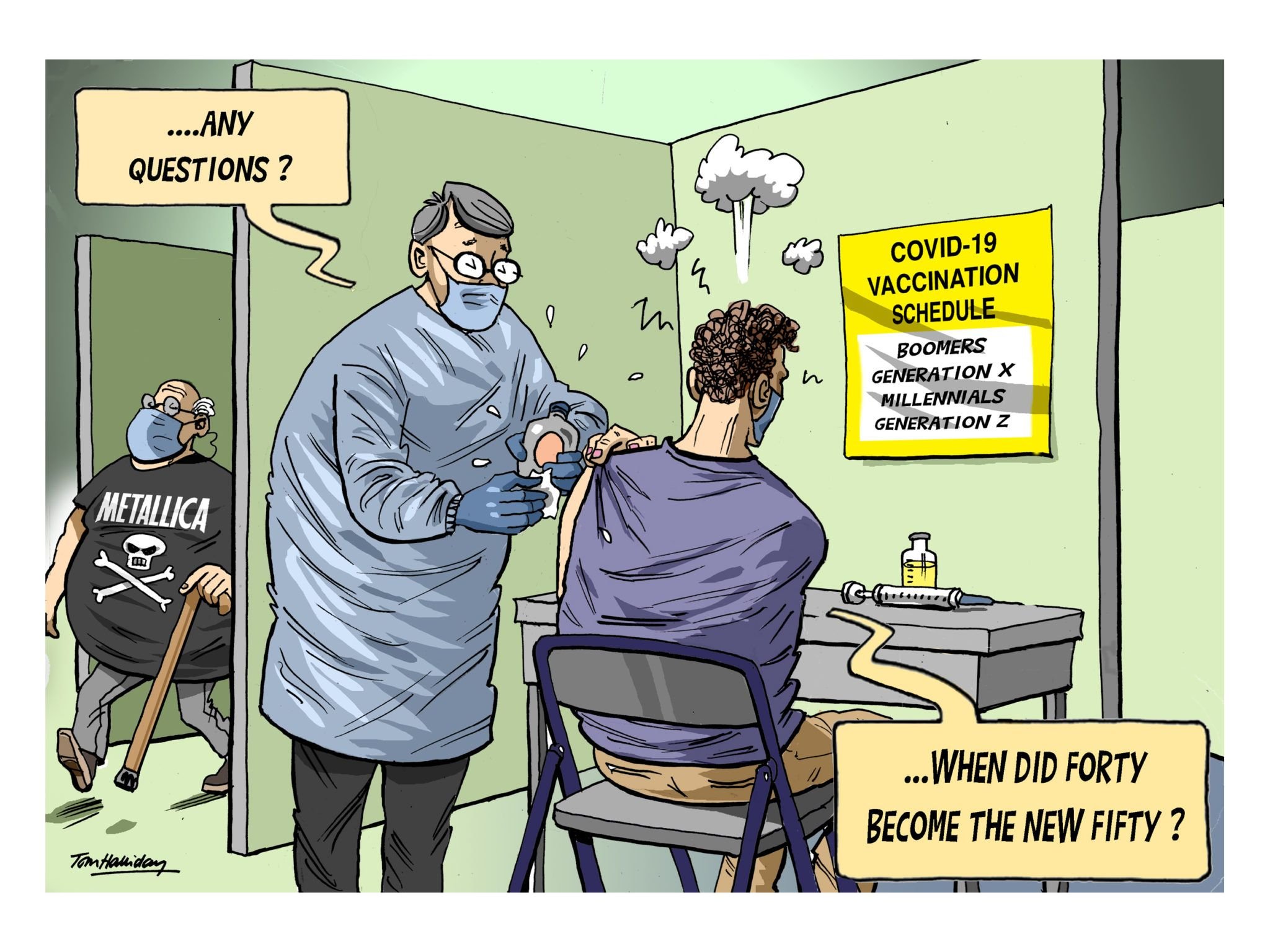