WITH names like John and Janet, the anonymously-funded lifeboat in Crosshaven; the Frederick Storey Cockburn in Courtmacsherry; Ballycotton’s Austin Lidbury, and the mouthful that is Miss Sally Anne Baggy II – never fear Baggy is here in Kinsale, colourful lifeboat names have always drawn smiles from those they serve.

The RNLI does amazing work and the iconic blue and orange boats are instantly recognisable to anyone – but not everyone knows the human stories behind each boat’s chosen name.

Its most unusual name, Tricia says, is down to one generous Englishwoman.

‘Sally Anne Odell funded our first lifeboat which we had for 15 years, before it was retired in August 2018,’ she explained.

‘Sally knew our lifeboat was due for renewal and when she died in 2017, she left a bequest in her will that would pay for a new lifeboat and all of its running costs for its lifetime, which would be another 15 years,’ Tricia added.

Tricia says that is just one of those expressions that Sally always used as she was consigned to a wheelchair and had a colonoscopy bag, which is why she referred to herself as ‘baggy’.

Sally used to visit the Kinsale lifeboat station at least once a year and was a very positive and forthright person, Tricia recalled.

She loved cruise ships and would often take a cruise from Southampton which would call into Cobh. There, Sally would always ask for the lifeboat to go out and accompany her as the ship came in to dock at Cobh!

‘Sally would always be up on the deck beaming with pride as the lifeboat lead the cruise ship into the habour and say, “that’s my lifeboat out there”, added Tricia. 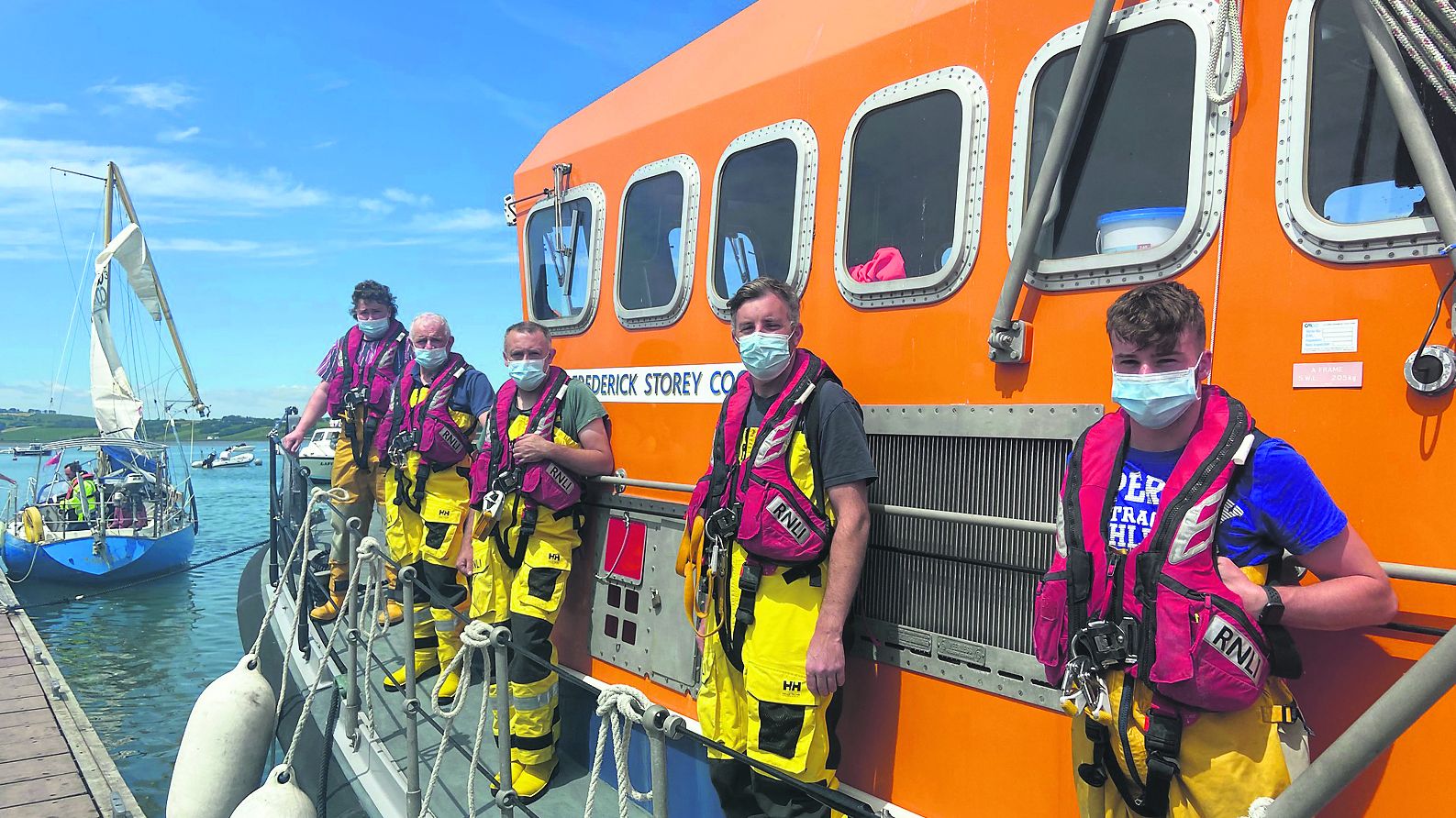 The crew of the Frederick Storey Cockburn in Courtmacsherry.

She loved the crew on the lifeboat and got on with them well from the very first meeting.  When Sally first met them in Kinsale, there was only a relief boat and no lifeboat station and the crew were working out of a caravan at the yacht club car park.

Sally had been doing research on places that needed a boat, and there was Kinsale and two other stations in the UK which she visited. But when she came to Ireland and met the crew in Kinsale, they got on ‘like a house on fire’, said Tricia, and she decided instantly that Kinsale was where she wanted her boat to be. 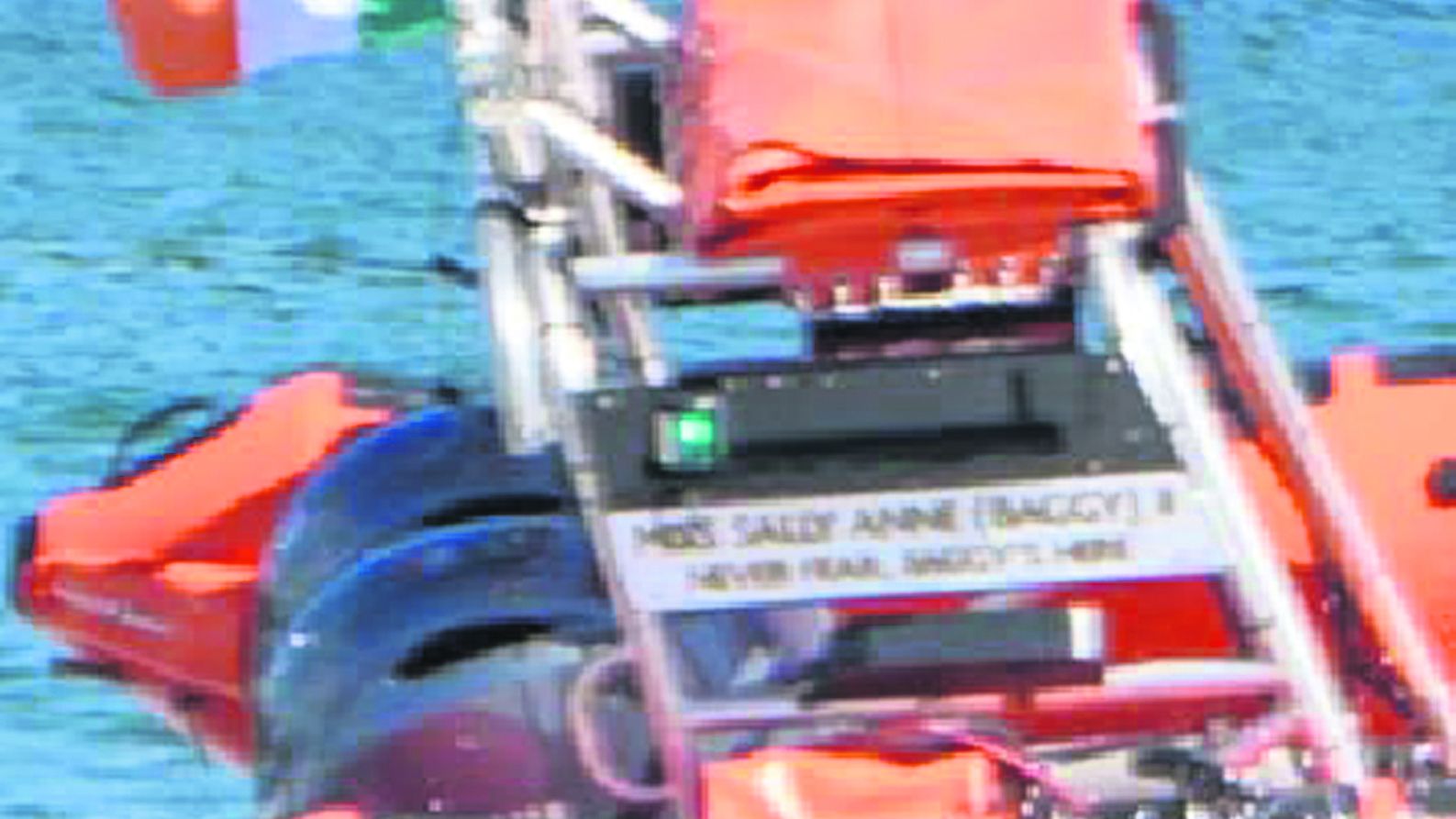 Tricia said that when Sally had her stop-overs in Cobh, the crew would get a little mini bus and collect her there and bring her for lunch, usually at the Trident Hotel in Kinsale, and then she would do a little tour of the lifeboat station. Then she would be driven back to Cobh to get back onto her cruise ship to wherever it was going next. 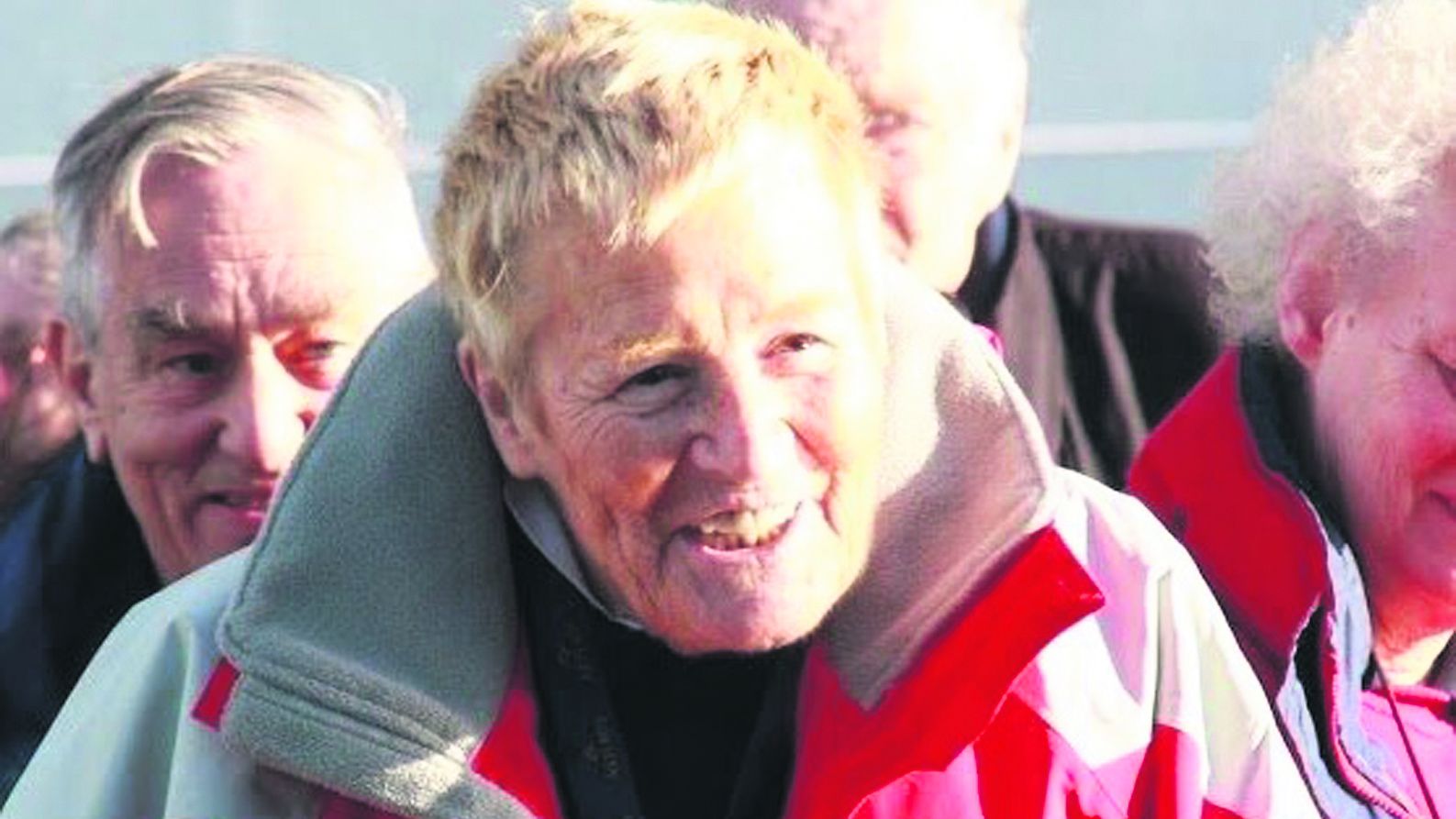 ‘We only saw her about once a year but she stayed in touch all the time and always wanted to know what we were up to,’ said Tricia. ‘We would send her press releases and stories about rescues we had carried out. When she died, a big box was delivered to the station and it was full of all her paperwork relating to the lifeboat, going all the way back to the first letter saying that she was interested in sponsoring a boat. We also have a lovely lifeboat station that Sally helped to fund and a little ‘Sally Anne Station’ plaque outside to acknowledge her.’

Of course, not everyone can leave a €350k boat as a legacy to the RNLI, but there is another lovely initiative which is called ‘Launch a Memory’. For €30 you can add the name of a loved one to the side of a Shannon Class lifeboat.

Ten thousand names are added to the side of the boat which helps pay for the build and goes a far way towards helping save lives at sea.