There was certainly no shame in Cork’s camogie defeat to Galway this weekend, in what was an amazing effort by the team.

It’s been an absolutely mesmerising few weeks for women’s sports in Ireland and abroad from Leona Maguire to the Meath women’s footballers to the exploits of Emma Raducanu at the US Open.

Your heart would break for poor old Mayo, though. At this stage, it feels like some sort of intervention is required. The curse of ‘51 won’t be beaten by sporting triumph alone it seems. I think all the other counties need to come together and agree to simply let them win it next year. Just let them have it, once and for all. I think we’d all just like to see the Mayo people celebrate, the poor ‘aul craturs. The county would probably sink into the Atlantic with the excitement.

We’d have to keep this plan secret from the good people of Mayo, obviously. The championship would have to be acted out in full by all the other teams, a kind of GAA version of The Truman Show.

Although thinking about it now, they’d still probably find a way to lose it. 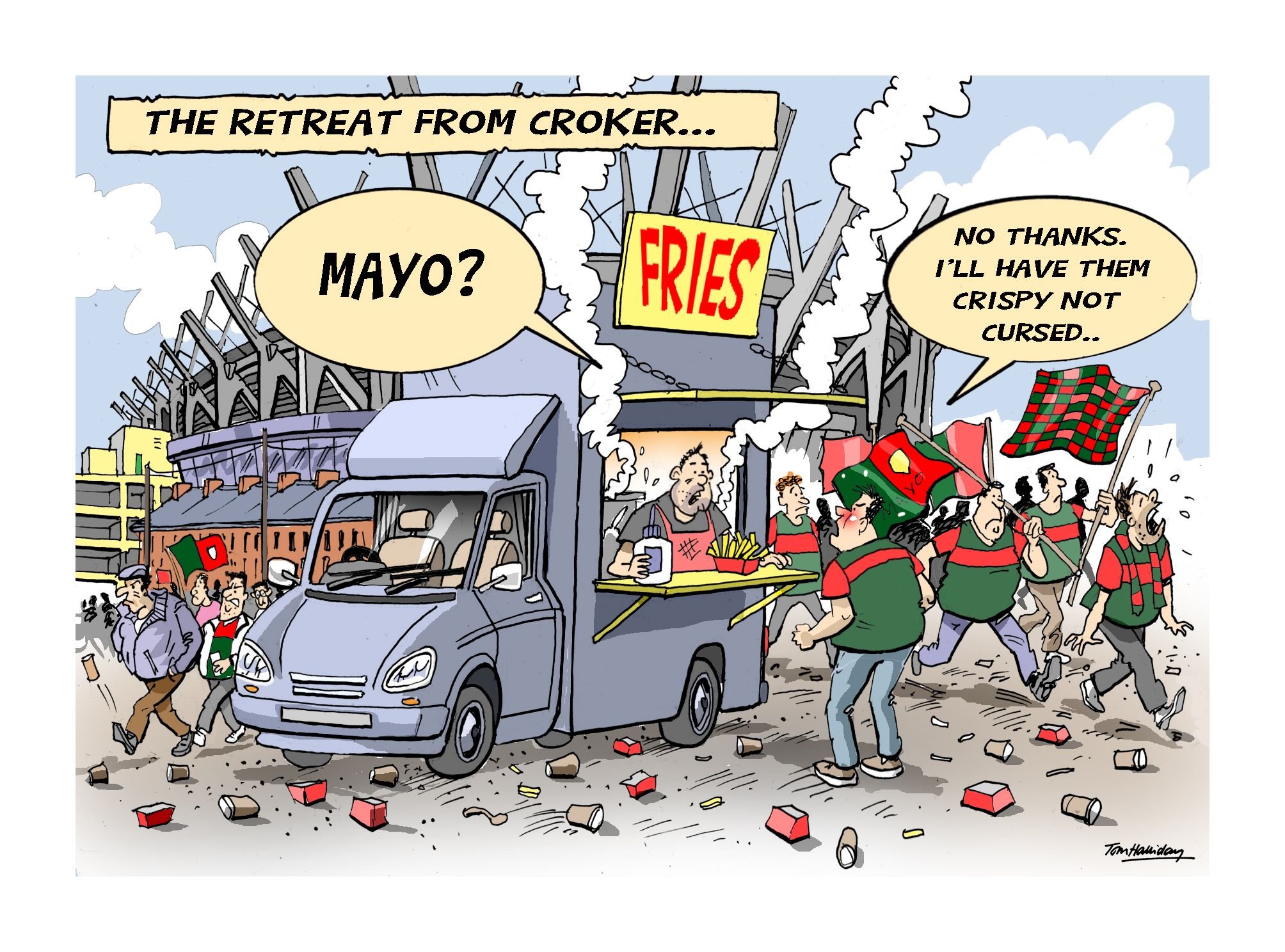 OVER the last week, I’ve been dipping into Netflix’s Turning Point: 9/11 and the War in Terror, an exhaustive and gripping series of films about the horrendous events that unfurled in New York and Pennsylvania 20 years ago.

For most people of my generation, this singular act of terror is etched in the memory, like the moon landings or the assassination of JFK are for others.

We all know exactly where we were on that day.

I remember working a temp job on the top floor of the ACC Bank building on the banks of Dublin’s Grand Canal at the time. My job was to organise a library of computer tape backups, a nice handy number I had for the summer before a return to college. I worked alone in a dusty old room with a transistor radio to keep me company. Cushty, like.

This meant I was able to listen to the drama unfold that afternoon via Joe Duffy’s Liveline show, where the enormity and horror of the events began to materialise via witness telephone calls from New York City. It was clear that America was under attack and that things would never be the same. In many ways, it felt like the end of a more innocent era.

Osama Bin Laden struck at the heart of America that cold morning, but the act of terrorism alone, and the tragic immediate deaths that it caused, were in many ways only the precursors to tragedies that are still spreading out across the world in its wake, like ripples in a pond.

I was struck watching the documentary by how much anger the event can still summon up in me. The absolute evil of the thing. The chilling audacity of its execution. So the urge for the Americans to go gung ho with their war machine and make someone, anyone, pay for this shocking assault on their way of life was in many ways completely understandable.

But this is why we elect leaders. When a population is baying for blood in the aftermath of an act of war, leaders need to think coldly and strategically about how to respond and try to understand why the attacks occurred in the first place.

Instead, a rush of blood to the head amongst the US elite resulted in a series of cack-handed invasions. The tremendous waste of human life, resources and energy consumed by these forays and the erosions of human rights, civil liberties and the empowerment of the surveillance state that followed, were all the direct result of hysterical men, hell-bent on revenge.

I was struck by the predominance of white men leading the charge in the war room images from the documentary. The ‘let’s roll’ testosterone. The weird religious overtones.

It’s fair to say that a few more women in the room wouldn’t have hurt.

There is a direct line between the 9/11 attacks and America’s current state of bitter division. The GOP’s lurch to the extreme right under Trump was birthed by the neoconservatives. The party has since been completely captured by these lunatics. Rudy Giuliani, who responded so competently and empathetically as mayor of New York in the aftermath of the attacks, now wouldn’t look out of place playing The Penguin in a Batman movie.

It was telling that there were no former Republican Presidents in attendance at the memorial ceremony in New York last week. America, arguably, hasn’t been this divided since the Civil War.

The omnishambolic withdrawal from Afghanistan is just the most recent ripple from that fateful morning in 2001. The fact that this itself is likely to be weaponised in the next election when Trump will run again, shows that 9/11 was only the starting shot. In many ways, Bin Laden’s attack still continues to this day, in the form of a poison that has infected mainstream US politics. He couldn’t have dreamed that this one abominable, heinous act would be the starting gun that would set Americans against one another and that US liberal democracy itself might one day come under threat.