How are the lockdown locks coming along? Perhaps you’re just letting nature take its course and you’re learning to live with the mullet? Or maybe you’ve gone the other route and taken the dog shears to your noggin? To be honest, I’m seeing a lot of suspiciously impressive hair-do’s out and about on my daily trot around the northside of Dublin.

You get the sense that there’s a thriving underground grooming industry humming away – fellas furtively snipping follicles down back alleys, masked young ones manning covert blow-drying stations in suburban garden sheds, ‘shampoo mules’ smuggling bottles of Toni & Guy conditioner into the backs of vans in the dead of night … It’s fair to say that people are beginning to interpret the current Covid rules and restrictions in their own way, and if scenes from Salthill at the weekend are anything to go by, some people are just drinking to forget them.

Personally, I’m sticking with the rules and I’m just going to avoid mirrors completely until the local barber opens again. Who knows what I’ll find staring back at me by the end of May – a cross between a hawthorn bush and Worzel Gummidge, most likely. 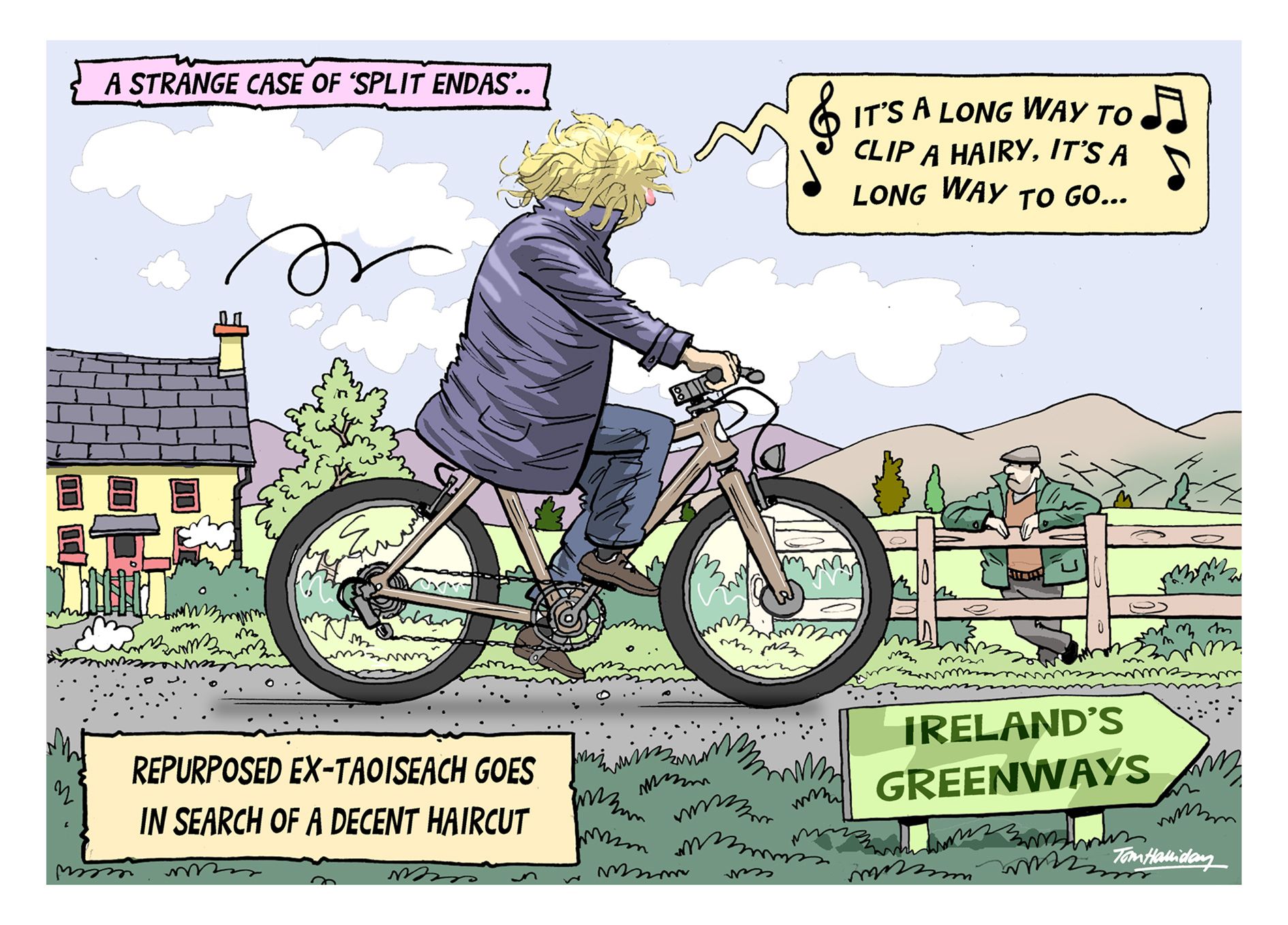 Enda on the right track

Another man who looks to have been completely ‘rewilded’ by the pandemic is Enda Kenny who has recently been popping up on the silver screen in Iarnród Enda, a travelogue documentary series on RTÉ featuring the former Taoiseach traversing the highways and byways of Ireland by rail, bike and wee donkey. (Or maybe that last one was a dream, I can’t remember.) Over the course of each half-hour show, Enda renounces all modern conveniences, presumably including his estimated hundred-grand-a-year State pension, to go off exploring grand Atlantic vistas, stopping off in small towns and hamlets for adventures along the way.

These include taking tea with kindly postmen, chatting as Gaeilge to native Irish roadside trees and solving crimes in the style of Angela Lansbury. Isn’t it fine for him, I hear you say, out and about on the Wild Atlantic Way like The Littlest Hobo while the rest of us are stuck in our kitchens staring at the four walls?

Liveline lit up like an inferno, of course, and Joe Duffy was more than happy to stoke the flames of outrage. ‘Boring’ and ‘unsuited to the job of television presenting’ were two particularly caustic reviews.

Although other listeners (presumably all members of Fine Gael) found the show to be quite a mindful watch, a welcome distraction in troubled times presented by a man who served his country well. Personally, I think RTÉ should ignore the whingers and commission some more shows fronted by politicians.

West Kerry by Tractor and Digger with Danny Healy Rae, for example. Or Who Wants To Be A Millionaire with Bertie Ahern. Or perhaps Where In The World Will You Store All My Personal Data with Mary Lou McDonald.

A League of their own

The big Premier League clubs only went and made a holy show of themselves last week, didn’t they? Their attempt to usurp UEFA and create their own Super League, a kind of footballing Hunger Games with a bit of hypercapitalism thrown in for good measure, was judged to be well off-side by all ‘proper football people’, as Eamon Dunphy might call them. If you had a sinking feeling that a game loved and built by communities over generations was fast becoming a plaything for oligarchs, Saudi princes and other denizens of the 1%, then this appears to be the proof in the pudding.

The English clubs rowed back fairly lively, however, when many former players, themselves multi millionaires who have benefitted nicely from football’s flirtation with high finance, started to rediscover their inner socialists on the airwaves and inspired fans to protest at the move. Give me the West Cork League over that nonsense any day.

It’s not been a great week for misogyny, if any of the 45 recommendations by the citizens’ assembly on gender equality go on to be implemented. State-funded childcare, sick pay and pensions for carers, maternity leave for all elected politicians and the removal of article 41.2 of the Constitution which enshrines a woman’s ‘place in the home’ are some of the measures recommended by the 100-member assembly.

Given the huge success of citizens’ assemblies in providing a forum for engagement on the marriage equality and abortion debates, it is likely to have a far-reaching and welcome impact.

After all, who in their right mind would want their place to be ‘in the home’ after a year of baking banana bread and doing hot yoga on the kitchen floor? How about the Constitutional right to a weekend away in a fancy hotel without the kids? Now there’s something all the sexes could get behind.