Tricia Lyne, ARC co-ordinator for West Cork, chatting to Graham Norton, guest of honour, at the official opening of the ARC Cancer Care Centre in Bantry on Thursday of last week. 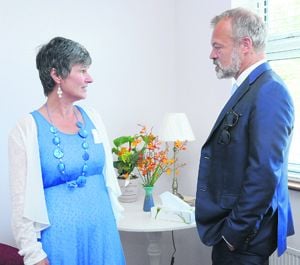 Tricia Lyne, ARC co-ordinator for West Cork, chatting to Graham Norton, guest of honour, at the official opening of the ARC Cancer Care Centre in Bantry on Thursday of last week.

‘You feel the energy when you come here,’ Professor Seamus O’Reilly said at the opening of a new Cork ARC Cancer Support House in Bantry.

He wasn’t just taking about the sun saturated garden party to mark the official launch of the support centre at Gories in Bantry, or the hundreds of people who turned up to show their support for a project that is dear to the entire community, he was talking about the sense of collaboration that made it all possible.

Professor O’Reilly, who is the chairperson of the Board of Trustees of Cork ARC Cancer Support House, said he is all too acutely aware that the figures for cancer have changed: ‘In my lifetime, cancer has gone from affecting one in six in our community to one in two.

‘Nobody in this room will not be affected by cancer: Cancer is a physical illness, but there is also the psychological aspect of it as well – not just on the patient but on the family, friends and extended community.

‘Having professional help like this available free of charge to people at the most vulnerable time of their lives is hugely important. For every person we treat, their outcome is better where their mental health is better.

‘If people are depressed they do worse so addressing their mental issues with their care is as important as the physical aspects of their treatment whether they are getting radiation, surgery or chemotherapy.

‘It brings the holistic aspects of care together. In ARC House, we have 1,200 visitors a year but we also recognise the people who we don’t see – the iceberg of the suffering we don’t see. So we have looked at Internet outreach, but there has to be physical outreach as well... now that outreach is here.’

Professor O’Reilly made the point: ‘Ideas are 10% but execution is 90% and, in that regard, I would like to very much acknowledge Dr Denis Cotter and the Bantry Hospice Project for their involvement here today.

‘Traditionally in life charities compete rather than collaborate and the problem is the patients get lost in the middle.

I have no doubt that this would not have happened without your involvement but equally I am convinced that our impact will be greater because of your involvement. Thank you very much for that.’

Professor O’Reilly also thanked Graham Norton for kindly agreeing to officially open ARC House and for bringing people’s attention to the care and support it will offer people with cancer. And to everyone in the wider West Cork community who assisted in completing the project, the professor acknowledged their ‘dynamic, can do’ spirit.

He said: ‘This is a community-led initiative that will have an enormous impact on the community. Thank you for making it happen.’

Ever since his ‘return’ to West Cork, Graham Norton has been front and centre in supporting projects like the Palliative Care Unit – The Suaimhneas Centre – that he opened at Bantry General Hospital in August 2010.

At that opening ceremony, Graham Norton made the point that the new Palliative Care Unit had not been ‘given’ to Bantry. He said it was something that the town had earned for itself through the work of the Bantry Hospice Project group and the thousands of people who donated varying amounts of money so that families could have access to palliative care facilities.

It was like déjà vu in Bantry on Thursday because the BBC talk show host and summertime resident of West Cork, expressed feelings of privilege and humility in seeing the completion of another remarkable achievement in terms of West Cork cancer care.

‘I am doing nothing... the good work here has been done already,’ he said. ‘People talk about community as it was an old fashioned thing, but something like this – Cork ARC House – is still going on.’

Graham said he understood that to get a diagnosis could be very isolating, but ‘it is great that there is something like this so people don’t need to feel alone.’

Since The Suaimhneas Centre opened in 2010, Dr Denis Cotter of the Bantry Hospice Project, said: ‘We have continued our fundraising activities and supported the palliative care team in West Cork by purchasing three additional cars for the team to provide the necessary home care service.

‘We have purchased various pieces of equipment for the palliative care team. We have funded the night nurse service, which provides valuable respite to careers who are under significant pressure.

‘We have also assisted Marymount in the funding of the social worker for the West Cork region, and continue to provide funding for any hardship cases, as well as training for the palliative care team.

‘We are hugely grateful for the ongoing support and generosity of the West Cork people in supporting the Bantry Hospice Project.’

When approached by Cork ARC House to assist in setting up a satellite facility in West Cork, Dr Cotter said: ‘We were only too delighted to be involved in this partnership because we believe it complements the services of Bantry Hospice by providing much need care and support to cancer patients, survivors, family and friends.’

Tricia Lyne, the West Cork Co-ordinator for Cork ARC Cancer Support House said: ‘Cork ARC is a safe haven for people with cancer and their families, where you can find information, practical help and emotional support.’