Young Farmer of the Year nominees for 2021. Photos: Andy Gibson

WE had a really positive response to our call-out for nominations for the Young Farmer of the Year award, and it’s clear that the sector is in very safe hands.

Our panel of judges had the difficult task of narrowing it down to three finalists, who are all quite different, but also quite similar in their commitment, work ethic and ambition to operate the best farming enterprises they can.

Most reassuring of all is their awareness of the role they have to play in reducing the sector’s emissions, and the practical steps they’ve identified to do this.

Equally heartening is their confidence that there’s a bright future for them, at a time when the sector is facing challenging carbon budgets.

This is the seventh year we’ve run the awards in conjunction with the Celtic Ross Hotel and it’s encouraging to see that levels of interest are as strong as ever.

Over the past few weeks we’ve profiled our dairy farmer finalists, our Hall of Fame winner, our drystock nominees and our diversification winner; and next week we look forward to revealing who will take the title of ‘Outstanding Contribution to West Cork Farming.’

MANAGING a dairy herd of 900 and a staff of four on a farm in Waikato on New Zealand’s North Island was a huge learning curve for Tim Crowley, when he was fresh out of college and in his early twenties.

And the experience has stood to him time and time again now that he’s back home in Ovens running the family dairy farm in partnership with his parents, Denis and Kathleen.

He first travelled to New Zealand for a six month stint as part of his dairy management course in Darrara, where he gained experience on a herd of 900 cows in a 40-unit parlour on newly purchased farm.

‘When I was finishing my course the owners got in touch with me to invite me back as assistant manager, which was an opportunity I jumped at, and after a while I was appointed manager. It was a real eye-opening experience and I learned an awful lot especially when it came to grass and animal management and operational systems from two to four (grass based +600kgs meal to a TMR cropping system),’ said Tim.

He has farmed in partnership with his parents for the past two years, during which time he’s been putting into play things he learned in New Zealand and getting good results.

‘Our 120 cows are mostly Friesian, but with some crossbreeding Norwegian red, Rutbunt etc. We’ve a spring calving herd, grass based system, with 80% in a six week calving rate and empty rate of 12%’ said Tim.

‘Last year we recorded 486 kilos of milk solids per cow and we’re on target to do 500 plus this year, feeding 800 kgs of meal. Over the past few years we’ve increased grass grown annually to 13 tonne, and since I came back we have improved the grass utilisation, that’s really starting to pay off ,’ said Tim (32).

He credits his father with being a bit of a ‘trail-blazer’ when it comes to improving soil fertility through slurry management and use of lime, which he’s reaping the benefits of.

As an ambitious young farmer, he’s acutely aware of the need to farm sustainably, and to do his bit to help reduce emissions.

‘We’re planning on building a shed over an existing slurry tank and I hope to put solar panels on it which would generate enough energy to provide for the farm, and house. We have also applied for the Dairygold Biodiversity Tree Project which will see us planting 250 trees of native Irish hedgerows; we also grow multi-species as part of reseeding and we use low emission slurry spreading.’

Agri-tech is also something that excites him: ‘We’ve fi tted our cows with Censortec collars to detect heat and any health issues and they’re proving very effective.’

When he’s not working he plays squash which he picked up in New Zealand, goes to the gym and is an avid cyclist.

‘I cycle with a group of mainly farmers and we’d head out on a Sunday. We’ve done the Ring of Kerry and other events like that,’ he said.

‘I’m very aware of the importance of work/life balance which is something I saw in practice in New Zealand and want for myself and family,’ he said.

A YOUNG Timoleague vet is playing a crucial role in helping to run his family’s modern, fully integrated pig farm.

Cathal O’Donovan (25) graduated as a vet from UCD in 2020 and has worked full time on the farm since then. His parents Martin and Angela began pig farming in 1994, with a few outdoor sows. After a few extremely wet winters they’d had enough of the cold and mud and decided to move operations indoors.

The farm is operated fully indoors nowadays with Cathal, his family and their 10 full-time staff, selling approximately 30,000 pigs a year.

Suffice to say it’s a large scale operation, but one that’s tightly managed and monitored to ensure sustainability and profitability.

Cathal and the team sit down with their vet and nutritionist every quarter to get a clear snapshot of the previous few months performances, take stock, and where necessary make adjustments going forward.

Huge emphasis is put into ensuring the pig’s dietary requirements are always fulfilled. Feed represents up to 80% of their costs, therefore it’s a crucial factor which needs to be spot on.

‘With this in mind, we always try to provide the right diet for the right pig. A combination of 12 specially formulated, different diets are utilised on our farm,’ he said.

Most of their feed comes from Barryroe Co-op which is just 5km away. Approximately 80% of the feed is made up of native wheat and barley, along with soya, maize and a mineral pre-mix selected by their nutritionist.

‘We were also involved in a recent month long trial with Carbery, Barryroe Co-op and a Dutch company where a protein concentrate was extracted from grass and fed to pigs as a soya replacement. There’s a lot of feasibility work to be put into the concept but It worked really well and in fact out performed our typical diet formulated with soya as the primary protein source.’

They also put a lot of emphasis on genetics, picking the best performing sows(as identified from their monitoring reports), and use high genetic merit AI from specialised pig genetic providers.

‘We’ve been investing heavily in our sow herd for the last six years and it’s an investment that is paying off . In 2016 each sow produced 24 pigs per annum, compared to 33.1 in 2020 which was a 40% increase and the majority of that is down to investment in genetics in the sow herd.’

Another metric that shows they’re on a successful path is the Food Conversion Efficiency Metric – that’s kilos of feed in measured against kilos of meat out. Cathal’s is coming in at 2.32 kilos, which is ahead of the national average of 2.44.

The vast majority of their pigs go to the nearby Staunton’s Foods, which Cathal says is good from a ‘sustainability point of view.’

They also send their slurry to an anaerobic digestor in the area where it’s used to create renewable electricity which is exported to the national grid and is used to power homes and business in their community. This side of the business is one which Cathal and the O’Donovan family wish to explore further.

One of the greatest challenges facing pig farmers in Ireland is acknowledging that pork and ham are commodity products.

‘At a global marketplace, that means the lowest price producer usually wins out. The pig market has always been notoriously volatile and inconsistent in the extreme, combining this with the ever increasing legislative and enforcement requirements, leaves the modest pig farmer in a difficult situation. If you’re not always at the top of your game, you’re struggling to survive,’ said Cathal.

The young man says he’s genuinely fond of pigs and describes them as ‘quiet, sombre and intelligent creatures.’ When he’s not farming, he’s playing GAA for Argideen Rangers. Right now he’s focussed on the farm, but in the future would like to work part-time as a vet, specialising in … pigs! 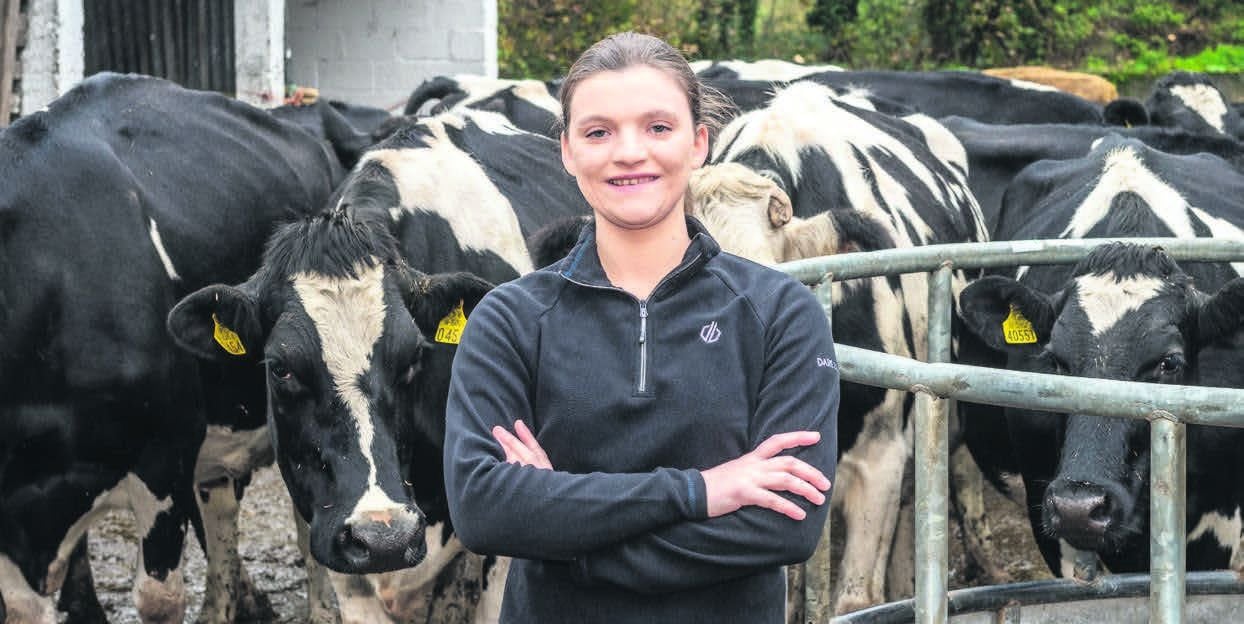 THERE’S not too many 23-year-old’s who have already purchased 32 acres of land and who are embarking on a major infrastructural farm project.

But it’s all in a day’s work for ambitious dairy farmer Denise Twomey of Upton who is currently setting up a new dairy farm consisting of a 12-unit milking parlour, silage slab, slurry tank and cubicles.

For someone who knew from early childhood that she wanted to be a farmer, it’s what she’s been looking forward to getting stuck into for years.

‘In national school I initially thought it wouldn’t be a career for me, as I had never heard of any women farmers.

‘Thankfully that all started to change as I got older and I went on farm walks and the like and by the age of 13 I was certain it was the only thing I wanted,’ she said.

‘The owner had a full-time off farm job so I was responsible for the day-to-day management. It was great experience and something I wanted to get under my belt before coming home,’ she said.

She is now farming in partnership with her father Denis. The farm has always been a dairy and beef enterprise comprising 23 milking cows and 40 bullocks on 64 acres in two blocks. That’s now 96 acres including the recent land purchase which Denise said ‘was a necessary investment to allow for expansion.’

‘I plan to milk 50 cows next year, but the facilities we’re putting in place will comfortably cater for up to 100 cows,’ she said.

She doesn’t see being a female working in the agri-sector as a disadvantage.

‘I’ve been very lucky that I’ve never encountered any negativity in terms of stereotyping from anyone I’ve worked for but I know a lot of women haven’t been as lucky.’

Denise loves crunching numbers and stats, and really enjoys the business aspect of the farm as much as her cows who are ‘like members of the family.’

Farming sustainably is also very important to her: ‘My focus is on improving soil fertility and milk quality. I am spreading lime, using low emission slurry spreading and I plan to reduce nitrogen usage by incorporating clover in the sward.

‘I started milk recording this year which will help improve milk quality, help me start selective dry cow therapy and allow me to select which cows to breed my replacement heifers from.’

Openly ambitious, Denise is clear that she wants ‘a simple straight forward farm system’, and has no interest in working around the clock. She wants time to enjoy a social life.

‘Ultimately I’d like to be milking 80 cows, producing over 500kg milk solids, growing close to 15 tonnes of grass, and feeding less than 700 kg of meal per cow per year.’

‘Other positive indicators include the fact that our EBI in Jan 2019 was 113, and last August it was 138; EBI for our calves for this year and last year was over 180, which shows our breeding strategy is improving the stock while also reducing the farm’s environmental hoofprint.’

Denise enjoys farming with her dad.

‘It’s nice to have someone to bounce ideas off . I learn a lot from him – and he learns a lot from me!’